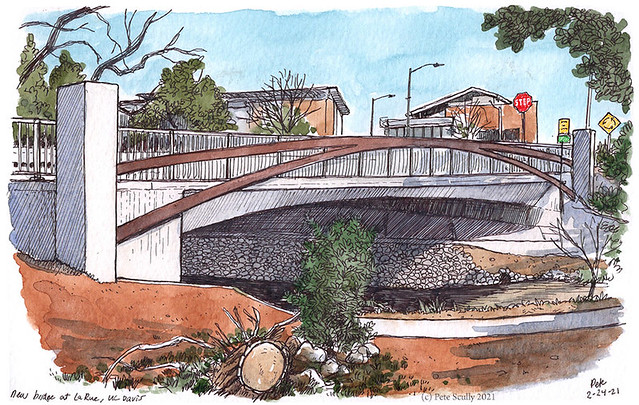 While I’m only going to campus once a week it’s still good to track the changes going on. This bridge near my office, where LaRue crosses Putah Creek, reopened recently after a long and necessary update. So on one of those very windy days we had recently I walked over and drew it. The Robert Mondavi Institute (RMI) of Food and Wine Sciences is in the background; they have a whole beer lab, and their own research vineyard. The wind was blowing so I drew as quickly as I could and painted it in later. It was so windy I didn’t even listen to a podcast. In my last post I mentioned about all the things about podcasts that make me turn off, but didn’t mentioned what I am listening to most these days. So here goes, my current podcast list, good for listening to while sketching. I like it when a podcast is roughly 50 minutes – 1 hour long as that’s a good time for a full sketch, unless it’s a bigger more complicated one or a double-page panorama. So in no order:

(1) Adam Buxton Podcast (very funny, he did a really fun one with Paul McCartney recently but I love his specials with old comedy mate Joe Cornish); (2) You’re Dead To Me (presented by Greg Jenner, historian from Horrible Histories, another one where I really love his enthusiasm and voice and his guests again always provide a good balance for the listener, he always has a historian and a comedian and they illuminate any subject colourfully, it’s definitely a highlight when this podcast comes out) (3) Guardian Football Weekly (I really like Max Rushden as a presenter, and he makes a good-natured balance to the dour but hilarious Barry Glendenning, the grumpy wit Barney Ronay and the scholarly Sunderlander Jonathan Wilson), the only thing is I think I actually enjoyed football podcasts more last year when there was no football, and they found more interesting ways to talk about the game in general rather than analyzing the endless mill of games we have now, and I can tell they want a break from this season; (4) Totally Football Show (with James Richardson, formerly of Football Weekly but best known for Football Italia on Channel 4 in the 90s, which us 90s lads all have fond memories of, and I really love the special Golazzo podcasts he does about the great characters and teams of Italian football); (5) Jay and Miles X-Plain the X-Men (I’ve been listening to this for several years now, as they walk us through X-Men comics history,  over 300 episodes in and they have reached the late 90s and even if I am completely unfamiliar with the stories or characters they are talking about, I can’t help but be drawn in by their enthusiasm and knowledge, and audibly they make a perfect conversational balance with each other, I could listen to them both talk all day); (6) The Infinite Monkey Cage (with Brian Cox and Robin Ince, science based and with a mix of science people and comedians saying funny things (or trying to) after the science people have said the science stuff; (7) History of the English Language (Followed since episode 1, this one is right up my alley as a fellow history-of-English enthusiast); (8) Travel with Rick Steves (I like Rick and his friendly nature, and there are always a lot of interesting stories from the guests about the various places or themes they focus on, but he did lose a bit of travel-cred when he kept referring to Windsor Castle as “Windsor Palace” in one episode); (9) Join Us In France (this is presented by a French woman who lived in the US for a long time and talks about all different areas of France and French culture, and I’ve discovered a lot of places I would like to explore by listening to this); (10) Checkered Flag Podcast (This one runs during the Formula 1 season and is really just a review of what happened that race weekend, but it’s always quite fun even if the hosts tend to sometimes wind each other up a bit much). I also listen to “History Extra Podcast”, “History of the 20th Century”, “Revolutions”, “Formula 1 Beyond the Grid”, “Nessun Dorma” (about 80s/90s football), “Zonal Marking”, “Talking Comics”, “Full of Sith” (Star Wars related but the voice of one of the hosts annoys me a bit so I don’t listen often, but I love that they love the prequels), “Dan Snow’s History Hit”, “Shakespeare Unlimited”, “Grounded with Louis Theroux”, “In Our Time” (with Melvyn Bragg), “Listen Up A-Holes” (Marvel Cinematic Universe reviews, though I tend to skip past some of the long-winded stuff), “Star Talk Radio” (though Neil DeGrasse Tyson isn’t as funny as he thinks he is, nor is his comic sidekick, he does know his physics), “The Curious Cases of Rutherford and Fry” (science), and quite a lot more that I listen to occasionally. But I also just listen to music, and we’re not getting into that here. I’m thinking of starting to listen to audiobooks more as well, I do like a good story.

But then again, when out sketching, usually I prefer to listen to the sounds of the environment around me, particularly if I am in a big city or somewhere new. The sounds make their way into the sketch. In this one though, it was the sound of the wind telling me to leave it for now and finish it up later.