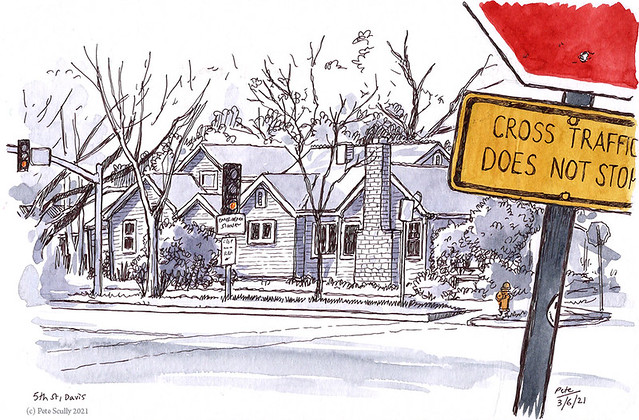 I drew this one Saturday afternoon early March, one of those times I just needed to go out and draw something, stopped on Fifth Street because it’s usually pretty sketchagenic. I like the way shadows hit shapes. I’m also constantly amused by the ‘cross traffic does not stop’ signs, because I’m a dad and it’s a typical dad joke remark. “Annoyed traffic speeds up” and “furious traffic runs red lights” and so on. “Polite traffic says, no after you, please, after you.” Stop signs are fun. They literally say “stop” which is not really open to interpretation, though people sometimes read “unless you just slow down and roll through”, or in the case of half the cyclists in Davis, “unless it’s you because you’re special.” The other half of the cyclists do stop at stop signs and red lights; I’m one of them. The thing here though is that cars just assume you won’t, which I suppose is fair enough, college town with a lot of new cyclists, but it’s when I do stop at the stop sign, after the car has stopped, and I wait for them to go, and they don’t, they just sit there at the stop sign waiting for me, even though they got there first. I’ve already stopped and they decide not to go and wave me through, by the time I realize what they are doing, another car on the other side starts going and it’s all very, huff huff , grumble grumble, at least in my British head. I don’t like the roads. Sometimes at red light crossings on t-junctions, if I’m about to cross the road (by foot or by wheel), it’s green man (well, ‘white’ man) or cycle crossing light, you go out and suddenly a car or a bike has jumped the red light and is hurtling right at you. I suppose they figure, well I may as well go since I’m not turning, what’s the difference. As I say, it’s been as many cars doing this as cyclists on the junction near my house. There aren’t as many cameras here as in London, where if you stray into the bus lane for a couple of seconds you get a huge fine in the mail days later. One thing about Davis though, we are considered the cycling capital of the US (the US Bicycling Hall of Fame is right here on the corner of B and 3rd, so we must be) and this was the first town in America to get bike lanes, and our bike lane system is extensive and well maintained and signposted. In general cyclists and vehicles get along and share the road. It’s a cause of great smugness from me and other Davis people who agree (not the ones who don’t). That said, the start of the academic year is always a bit of a free-for-all – campus between classes is like the Tour de France on steroids (ie, it’s like the Tour de France) when you really just avoid all roads and roundabouts lest you want to be mangled in a pile of metal, oily chains, textbooks and limbs. Downtown though in October, it’s like an episode of “Cops” on steroids (ie, it’s like…). Well, that’s an exaggeration, but the local police do conduct little stings where they’ll have an officer waiting at certain busy cross-junctions to flag down and cite (or at least educate) cyclists who go right through the Stop signs. It can be pretty dangerous so it’s good to nip it in the bud, and word gets around. I remember when the campus police force would also stop cyclists who cycled at night without a light, and rather than cite them they would hand out bike lights. Education is always good. Things always calm down a bit more in the cycle lanes by the time November comes around.

This building on Fifth, I think I’ve sketched before but this is the one involved in the tragic shooting of a young police officer Natalie Corona in 2019 a block away, I think this was where the murderer came from, and went back to, and was eventually found by the police before taking his own life. It was a terrible event, and I always think of that now when I’m down this part of the street.

I needed a milkshake after sketching this. I had a delicious chocolate milkshake from Baskin Robbins downtown, and trundled home. I don’t get those milkshakes much any more so it was a treat.