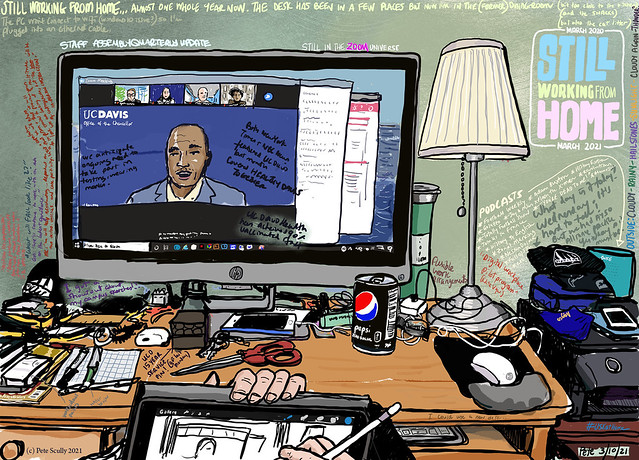 Here’s a digital sketch from a recent UC Davis Staff Assembly meeting, with the Chancellor Gary May speaking on screen there. This is my at-home desk still. There’s a lot going on here. I try to keep it clear but things just keep showing up there. I would like a new desk, to be honest. Maybe one of those fancy ones that goes up and down so I can stand. One of our lecturers at work has one that I really like. Drew this on the iPad, took the odd note here and there, did half of it over lunch once the meeting was over while Barcelona played PSG in the background, a Champions League match on a Spanish language channel. This working from home thing is so done now. I do go into the office once a week to take care of something or other, I much prefer it. At home I am too close to the snacks in the kitchen. Part of this meeting was the discussion about our plan to return to campus this Fall, all in-person again. It’s still early doors yet, but I’m optimistic. But it’s going to be a long transition, for everyone. Let’s face it, we’re not going back to normal normal any time soon, this will all take a long time to get over. 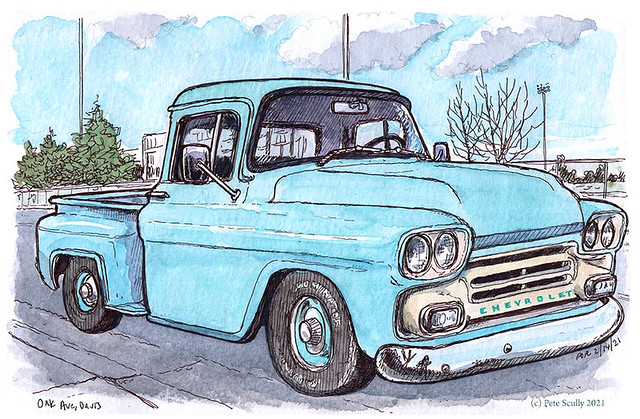 I like these types of truck. There’s something very ‘Pa Kent’ about them. I’m not a fan of modern American trucks which are more along the line of macho monster truck take up as much room as possible macho nonsense, the ones that stick out too far at parking lots and have their headlights up higher so they can blare directly into the windscreens of more normal-sized vehicles. Everything’s bigger in America, and if it isn’t, then GM have a way to help you overcompensate. I love this one though, especially as it’s all nice and shiny, and the shade of cerulean blue, slightly teal, is lovely. It was parked out on Oak St a few times and I cycled past thinking, I must sketch that some time. So in mid-February I did. Those are the sports fields of Davis High School in the background. It was another of those windy days we had a lot of in February.

Vaccine’s feeling a lot better today, two days after second shot. Yesterday the body was feeling very fatigued, but the seasonal allergies were kicking up as well. Hopefully the rubbish-joke side-effect has cleared up now. I thought I’d post this sketch since things are starting to pick-up… 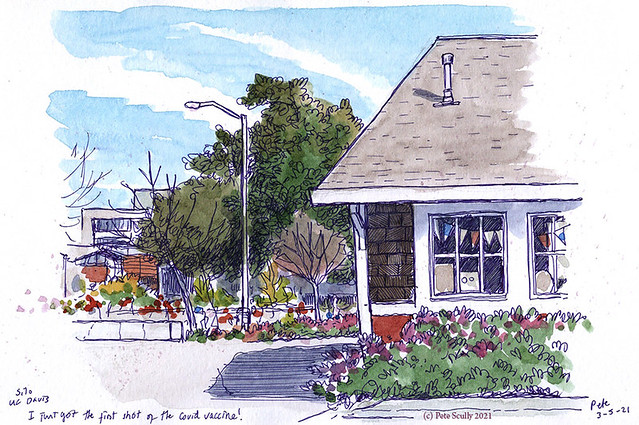