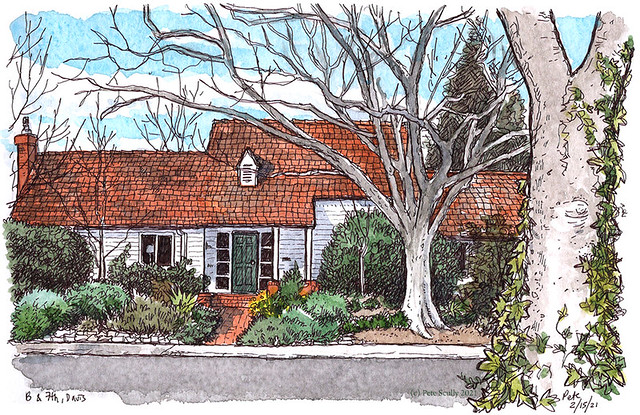 First page of a new Moleskine watercolour sketchbook, and this was an afternoon get-out-of-the-house bike ride down into Old North Davis, the edge of it anyway. I like the old historic houses in this part of the world, so many stories. At least I assume they have so many stories, to be honest none of them are any of our business. I do really like John Lofland’s book about Old North Davis, in which he goes street by street, building by building, and tells us when they were built, original owners, whether the house was located somewhere else before (around here, moving house sometimes means just that). This one is just outside the Old North Davis zone covered in his book but it’s still lovely. I’ve been running more in this area, south of my house. I like to run earlier in the morning, and listen to podcasts as I go. I’ve realized a few things about podcasts. I am very picky, like with a lot of things in life. I will almost never listen to a podcast recommended to me by anyone. If the voices of the people presenting it are too similar, I can’t listen. Similarly, if they are too different in terms of their pace or volume (particularly true in the current world where podcast guests are all over the place, zooming in on different microphone set-ups) I struggle to listen. If there is too much production – too much incidental music, I can’t listen. If there are ads, well if they’re about 30 seconds long I can skip them easily on my iPod, but if it’s one where the host actually stops mid-interview and starts reading out the ad themselves (and not in an obviously pre-recorded, different sound kind of way), which is far far more common on American radio than on British radio I note (as someone who can’t bare to listen to the radio), I can’t listen. If one of the hosts or guests has a tendency to pause before responding often, making it seem to the podcast listener that maybe their iPod has gone on the blink, and those pauses aren’t edited out, I can’t listen. If one of the hosts has a very whiny voice, I can’t listen. If a guest changes subject mid-sentence in a kind of – and I know I do this all the time, like right now for example – just like that fashion, I can’t listen. If the hosts swear, well if they are British I can get it, there’s a rhythm and context to it, but if it’s an American swearing it sounds all wrong, like they’re trying to be hard, and I can’t listen. If one of the speakers has the sort of voice that when you are in bed and listening to fall asleep to is totally fine, but when you are running and there is traffic but you can’t turn it up because the next speaker has a booming or whiny voice, well I can’t listen. If the guests on the show talk for too long before the next question by the presenter, I can’t listen. If the guest is speaking down an obviously tinny phone line like some Eurosport commentator in the CupWinners Cup in the early 90s, I can’t listen. If the speaker just spends ages listing things they don’t like, pet peeves, in a repetitive and predictable and self-aware way, even if they are being ironic, which let’s face it is worse, I can’t listen. If the speaker goes on about Arsenal too much, I can’t listen. If they always mispronounce French place names, I can’t listen. If they think Snickers is a better name than Marathon, I can’t listen. Etc and so on. I’m very picky. However I have discovered that if you listen to any podcast, any podcast at all , in 0.5x speed, it sounds infinitely better because suddenly you are listening to a bunch of people drunk in the pub slurring about medieval history or decreasing rates of XG in the Bundesliga, and who wouldn’t enjoy that? Alternatively listen at 1.5x speed, and you get them talking really fast, which then makes me run fast and I’m zippingaboutallovertheplacelikeMr.Rush, which helps my pace-per-mile. But never listen to anything on 2x speed, because that will hurt your head.