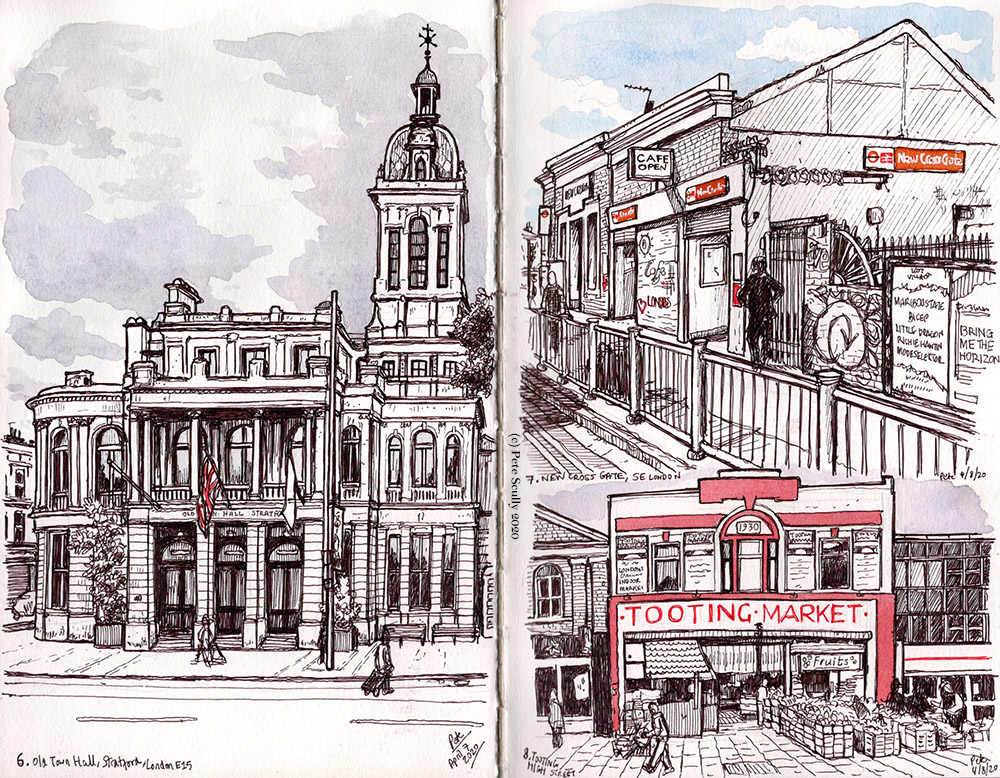 Going east from the city, this is the last bit of vaguely familiar territory for a while for me. On the left, number 6, that is the Town Hall at Stratford in east London. I have been inside there once, while I was a student at Queen Mary University of London in nearby Mile End, and I took a French exam there. I studied French, though I probably didn’t study it as hard as I could have. I lived in Belgium and France for brief periods, but my French is not the best. Chaucer made a joke in the Canterbury Tales about one of the pilgrims, the Prioress, speaking only the French of “Stratford at Bow”, not the “proper” Parisian French (“And Frenssh she spak ful faire and fetisly, After the scole of Stratford atte Bowe, For Frenhssh of Parys was to hire unknowe.”) Seems to me he was making a joke at my own poor French, learned at Stratford atte Bowe, seven hundred years early. Oh well. You may know Stratford from the 2012 Olympics in London, that was a beautiful occasion wasn’t it, still my favourite opening ceremony, made me miss home for sure. I’ve spent a bit of time in Stratford over the years, seen it change, I would never have guessed the actual Olympics would end up there some day, but that happened.

Right let’s not linger, time to jump on the Overground and end up in New Cross Gate, across the river in southeast London. Have I ever been to New Cross? I don’t think I have. It was always one of those places I’d see interesting indie club nights advertised on fliers handed out in Soho or Camden, but then I’d see where New Cross was and I lived in the complete opposite end of London. If it was beyond the river, yeah probably too far. I don’t know south London very well; as a north Londoner you grew up with a lot of people basically acting like it was a different city entirely. They talk different them Saaf Landoners, and there aren’t as many tube lines down there, and cabbies won’t go saaf of the rivah after dark, see. Not that I ever got a cab anywhere. I did get to know some of south London in the late nineties though through the medium of going out with women that lived in Clapham. That’s an interesting area, divided into Clapham North, Clapham Common and Clapham South, but there’s also Clapham Junction but that’s not on the Northern Line. It’s an area so full of European au pairs that my friends referred to it as “Nappy Valley”, though I didn’t get the pun on Napa Valley at the time, I assumed it was some saaf London thing. I love that we call it “saaf” London, even though I also pronounce “south” as “saaf” more than half the time. My norf London accent can be quite thick, even now I’m Californian. For example when I was a kid, true story, I though Bran Flakes were called that because of their colour, because they were “Braan”, literally brown flakes. Not all norf London speaks like that, in fact there are loads of slightly different accents across London, but most Burnt Oakers like me have quite strong cockney voices. So no, I’ve never been to New Cross. Why did I include it here? Not sure, maybe I really wanted to go to nearby Goldsmiths College years ago, doing art and whatever else they are famous for, but I ended up choosing Queen Mary and studying French and Drama, and life takes whatever turn it has to.

Right, turning away from New Cross, I now have to get across south London somehow to reach Tooting. I probably should have left this stop out, or drawn Greenwich or moved directly to Canterbury, but I didn’t want to be so dismissive of South London that I would draw New Cross and then be like right, that’s all there is. So I went (virtually) to Tooting, which is a stop on that lower part of the Northern Line, the line that stands on one leg, and a place I have never been. I know it only from that TV show that was on when I was about 3 or 4, Citizen Smith, with Robert Lindsay as Wolfie Smith. Aparently when I was 4 and filming a TV show at BBC TV Centre in White City I saw Lindsay and went up to him excitedly. My mum told me that years later. Never been to Tooting, but I’ve been to nearby Balham a couple of times, both times going to parties there in my early 20s. Being on the Northern Line, that meant I could get home without changing trains, theoretically, so I wouldn’t be lost in the wilds of saaf London. This sketch is of Tooting Market, which looked interesting but I will probably never go to. Maybe I should have drawn Croydon, that’s a more interesting place, but in my mind I probably still thought, yeah but I should be near the tube so I can get home in time for dinner and watch Gladiators and Noel’s House Party, even though actually I’m sitting at a desk in California in 2020.

Ok, enough norf-London bewilderment at saaf-London, now time to get all London-centric with the rest of the country. Next stop, Canterbury! (checks notes) I mean, next stop Broadstairs! Broadstairs?