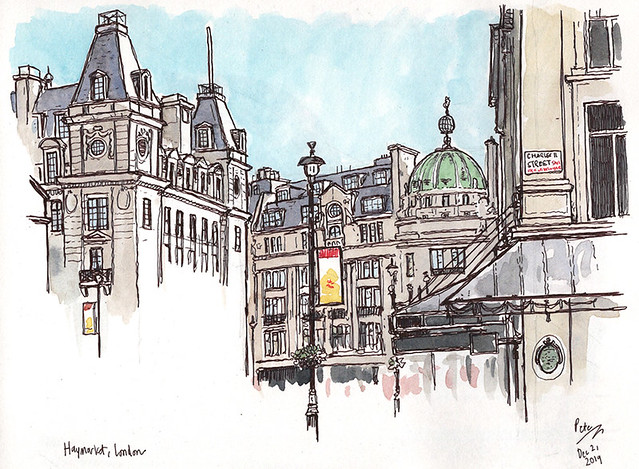 I went back to London at the end of November / start of December for a short week, and managed to get in a couple of sketches while I was at it. Above is the view looking down Haymarket. It was a bright day. I really enjoy looking up in London, seeing what’s at rooftop level. Years ago I used to tourguide down this street, on the upper deck of an open-top bus, pointing out this, talking about that. That was twenty years ago now, how things have changed. These rooftops have not changed much. Another thing that hasn’t changed much, Phantom of the Opera is still playing at Her Majesty’s Theatre, which is on the right there, at the corner of Charles II Street. I went to see it once, I knew someone who worked for the show who got me a ticket, and I had to enter right as it was beginning, so it was dark as I went to my seat, which was in the front row, where people have long legs that I can trip over, and I tripped over and onto my head, and nearly fell into the musicians. Fun times, always the cool cat I was. Bit of a silly story though, Phantom of the Opera, at least the bits where Jar-Jar was messing around. Lightsabre fighting was amazing though. Wow that was twenty years ago, I remember it so well. 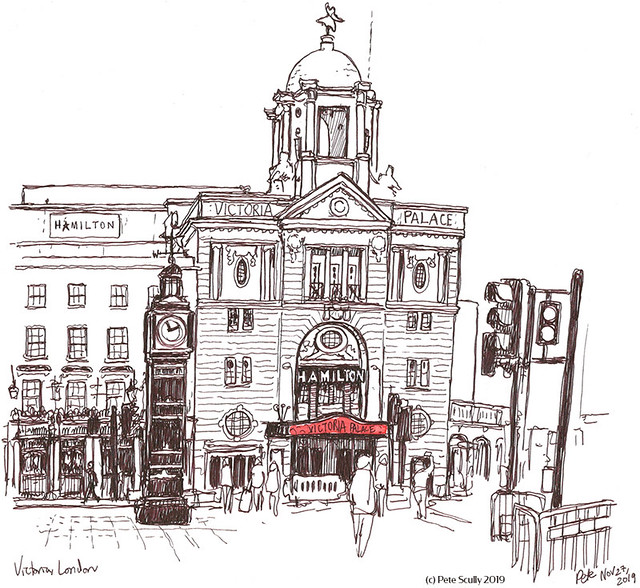 A show I saw considerably recentlyer was Hamilton, which we saw right here in London two years ago, and then again in San Francisco last year. This is the Victoria Palace Theatre in Victoria, with Little Ben in the foreground. I drew this after leaving my Gatwick Express train and before jumping onto the Tube, that;s right, I arrive and immediately start sketching in the rain. Well I knew my wife would like this, she is a big fan of Hamilton the musical. I loved it too, especially the bit with the racecars, but I was sure Vettel would challenge him to a duel at the end, but he crashed out in the 46th lap after making another avoidable mistake. I have a really good memory for theatre stuff, it must be my degree in drama. 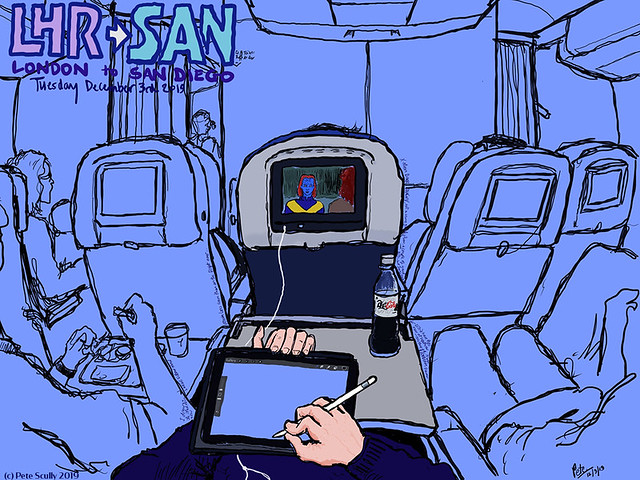 I didn’t draw much on this short London trip. It was really just to see the family, I just felt the need to come over there (maybe I had a feeling that 2020 would see us all stuck at home and unable to get across the Atlantic), catch up with some friends, and that’s it really. I bought a bunch of mince pies for christmas, a nice store assistant in Tesco Borehamwood showed me how to find all the boxes that had sell-by dates later than December 24, they were hidden deep. I was taking all my mince pies and yule logs and British festive foods with me to Hawaii for our Christmas vacation. But then it was time to go home, and sat on the plane I could tell was going to go home with a cold, just a feeling in my throat, back in the days when we just trusted our immense immune systems to do their job because that cold was probably just a cold, no worries. (It was, though I also picked up some bad nasal infection). I managed another sketch on the plane though, this time with the iPad, while Big Tex next to me planted his massive elbows on the armrest and beyond like it was manifest destiny. There was no social distancing in coach. It was another time, back in the 2010s. 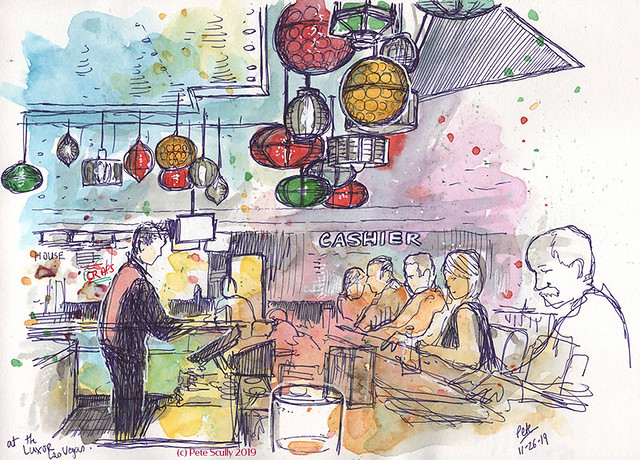 One more thing, one more trip back in time. I flew to London via Las Vegas, as it was the easiest route, but it meant I had to stay the night. It has been many years since I was in Vegas, so this one night away was going to be a bit of a time-travel trip, and so I chose to stay at the Luxor, which is the hotel we stayed at before our wedding way back in the mid 2000s. We still lived in London them, so the Luxor felt big and glamourous and futuristic. Yeah not so much this time. I checked in fairly late, the desk woman barely saying a single thing to me as she snatched my credit card and scornfully slammed it back, “welcome to Vegas, now f*%koff to wherever”. Nice to feel like a valued customer, not even telling me how to find my room in this ridiculous headache of a shopping mall. The room was dark and a bit grubby, peeling wallpaper that certainly has not had an upgrade since we were here in 2004. I walked about the casino, a depressing experience, unsure of what the time really was, and went to find some food, which I found, and didn’t enjoy. This is one of the older casinos, of course, but I’m just so not used to Vegas any more. Worst of all though was the smoke, hanging over everything like a plague-ridden miasma. This is definitely something I don’t miss, choking in other people’s fumes, irritating my nose, throat, eyes, soaking into my clothes, in a huge concrete pyramid. That gave me a headache more than the flashing Wheel of Fortune machines. Still this is a trip back in time. I contemplated walking over to New York New York where I remember having a fun evening with friends at the Five Nine Irishmen bar or whatever it’s called, when my mate Simon had the worst Guinness he ever drank, but instead I stopped for a couple of drinks at the bar in the centre of the Luxor, and drew what I could see amid the colourful 70s style haze. I listened to people talk, it seemed to be a mix of locals hanging out there rather than tourists, and the cocktail I had was nice, and the barstaff pleasant. I went to bed and got a good night’s sleep before the flight to London in the morning, though my own airways couldn’t wait to get out of the building.