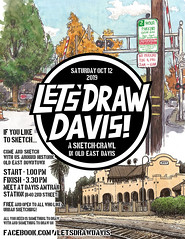 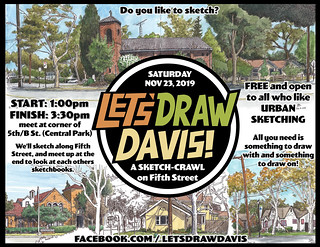 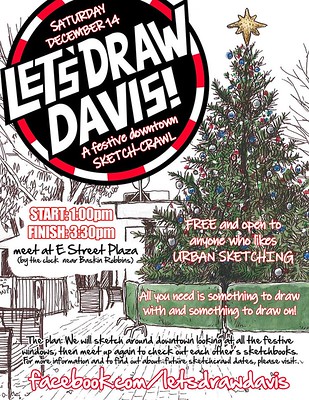 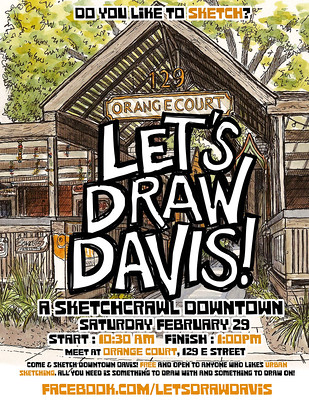 Because I was so lax in my posting (“lax” is another word for “lazy”, but my excuse was I had lots of books resting on my scanner and if I moved them the cat would jump up there and wow is that the time, gotta go) I never got around to showing the results of the recent “Let’s Draw Davis” sketchcrawls, those in October, November and December 2019, as well as February 2020 (we missed out January because I was very busy coaching soccer, and right now with the planet on hold, I’m not doing so much of that). So, now is a good time to report on the sketchcrawls. By the way, “Let’s Draw Davis is a series of sketchcrawls – meet-ups for those who want to sketch with other sketchers and then show each other their sketchbooks at the end – that I started back in 2010 after I came back from the first Urban Sketching Symposium. I had been on sketchcrawls in Davis before – the very first time was way back in December 2005, one of the early Worldwide Sketchcrawls (Enrico Casarosa’s ones, they are still going every three months), and I joined in a few other times since, but I decided that we as a town really needed to have something more often, monthly, advertised, free and open to anyone at all who likes sketching (as the worldwide sketchcrawls always are), non-judgemental, non-critiquey, beginners or experts just getting out and seeing their town and putting it in sketchbooks, and then if other people see you doing it, they might be inclined to join in. Being monthly means that if you miss one another comes along next month. except, sometimes it is difficult to organize them, so there are now a few others who help with the organization, and we have a really good group of regulars (including of course Alison and Allan who were sketching with me even back in that early ‘crawl of 2005, and inspired me to keep sketching Davis). There have been a lot of sketchcrawls over the years, most of the same locations repeated, I’ve made a lot of posters (and stickers and occasionally maps), and also made many sketching friends. Perhaps my favourite event was the 2017 Davis Centenary sketchcrawl, when we drew buildings that were all 100 years older or more. Let’s Draw Davis (I came up with that as a name while furiously scribbling notes on the flight back from the Portland Symposium, full of energy and ideas, finally deciding that to needed to ‘get myself out there’ in the art world of Davis rather than always hiding away, actually meet other artists and learn about their work, and it’s been for me personally a great success on that point). From there I did a sketchcrawl in London to mark the launch of the new Urban Sketchers (USk) London chapter there in 2012, called “Let’s Draw London” (I really like alliteration; this one kicked off the “Let’s Draw London” sketchcrawls that have continued ever since). I have long thought about doing a monthly sketchcrawl in Sacramento called either “Let’s Sketch Sacramento” or “Sacramento Sketch Saturday”, and if we ever get the Earth back to normal I still plan on doing that. Oh I have lots of plans for all sorts of themed sketching events.

Ok we will start with the one in October. This one was in Old East Davis, which is the the few blocks east of G St downtown. It’s an old neighbourhood, with some interesting houses (such as the Schmeiser House – aka the Swastika House because of the big turn-of-the-century swastika in the brickwork on the chimney). We met at the Amtrak Station, did a bit of sketching around there, and then went off from there. I enjoyed talking to people about perspective, giving a few pointers here and there, but then I wandered off and drew a few things, starting with the ‘Davis Tower’ opposite the main Amtrak station building. 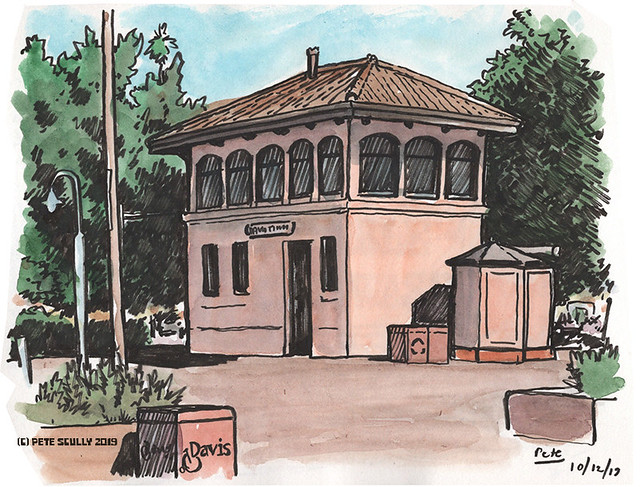 I then went along 3rd Street, opposite the Trackside Center which has been threatened with redevelopment for a while now, but it doesn’t seem to be happening just yet. This is the entrance to the Cable Car Wash. 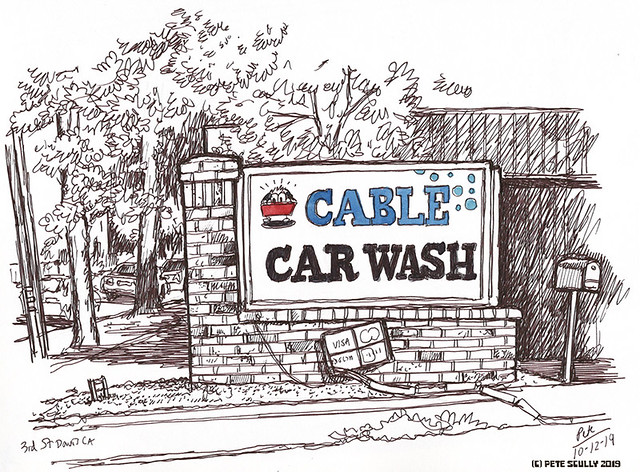 And this is the long-term favourite subject of mine, Nails By Tam. Now I drew this originally back in 2006 with coloured pencils, before I even started using watercolours to colour in my sketches, and I’ve also drawn it when it was in a different location, but it seems to be back here now. It’s a little out of the way, I sued to cycle past it on my way home years ago, so it reminds me of the first half of my Davis existence, I felt a lot younger then. 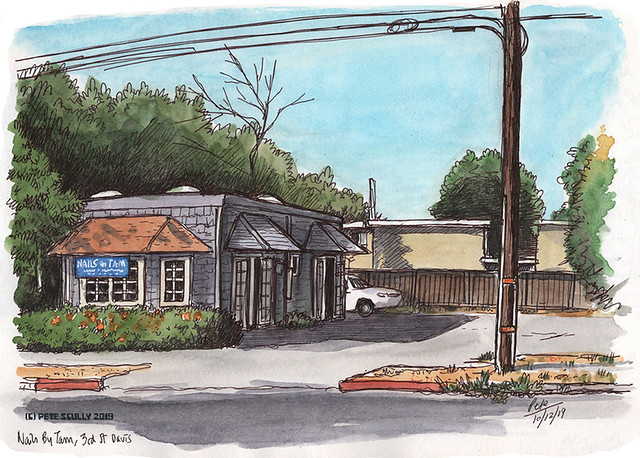 Then we all met up again at the Amtrak station…

For November we met at the corner of Central Park for a sketchcrawl along Fifth Street. The annual Turkey Trot race had just packed up nearby – I ran in that race by the way, I did the 5k! I am really into running now – and I had my new iPad, so was able to do a quick demo of how that works, showing a video of a sketch I did on a trip to Portland the weekend before. But I love my pen and paper, so my main sketch that day was the corner of 5th and B (actually this stretch of road is where 5th stops and becomes Russell). Highly autumnal (or fallumnal as I think they say over here): 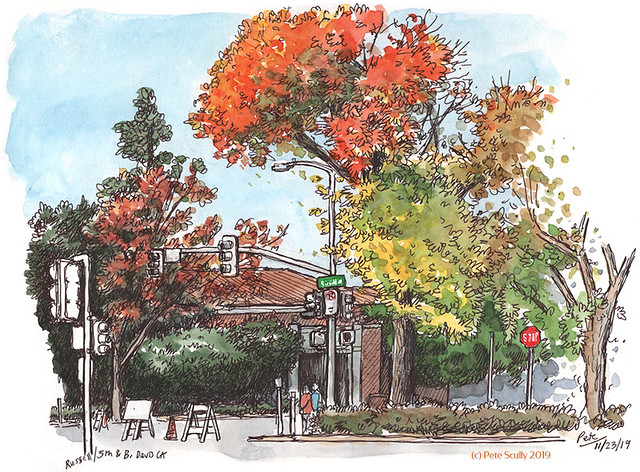 Then i turned the other direction and drew with the iPad. I never quite finished it off (I could have done later but I never had the time) but it was fun to do this and show people how the iPad works for this sort of thing. I’m very much still learning though. 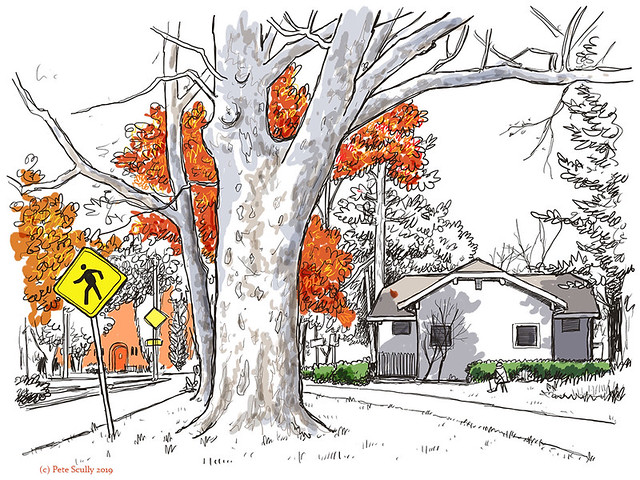 And we met up right there afterwards – Marlene Lee took these photos, you can see more at the FB page: https://www.facebook.com/LetsDrawDavis/ 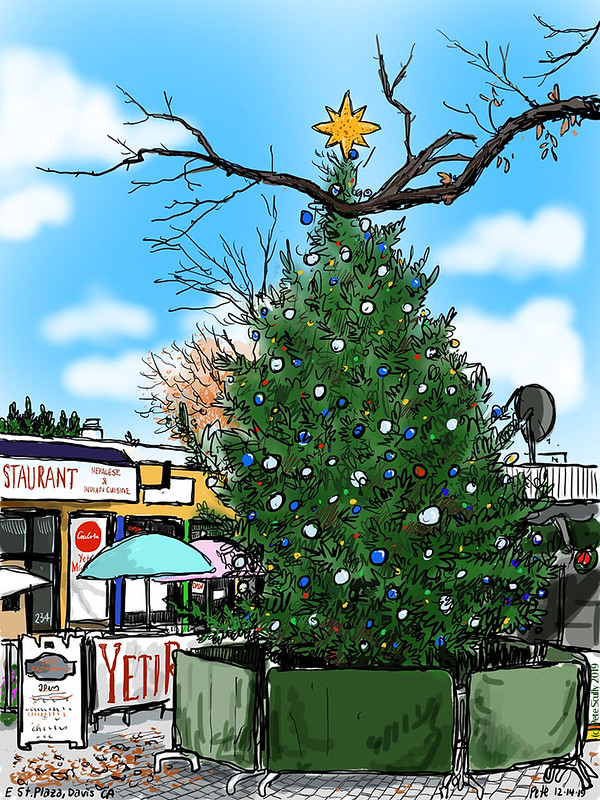 For the festive crawl we went back downtown to the big Christmas Tree on the E Street Plaza. For this I also used the iPad, sketching in ProCreate. I have drawn the tree that is put up here a few times, even though I always say “last time! I don’t like drawing Christmas trees!” But actually it turns out I do, especially when I have a new toy that makes drawing the lights and baubles so much easier. I was still getting the hang of colouring in but I like that you can do the sky in a different layer and make the clouds look all fluffy. Also you can zoom in to draw smaller details. Merry Christmas folks, several months late! 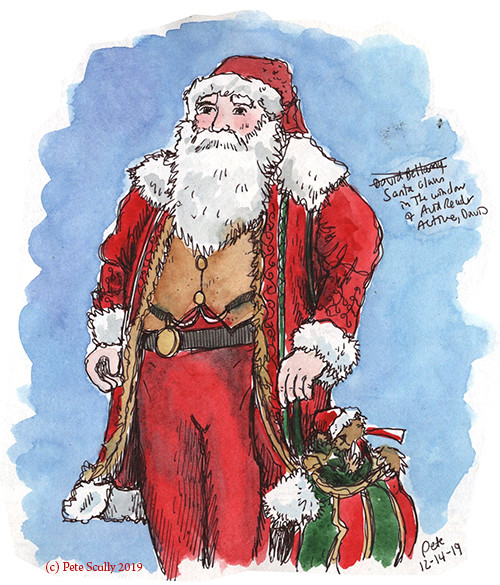 In the window of the Avid Reader Active store was a large well-dressed Santa Claus. 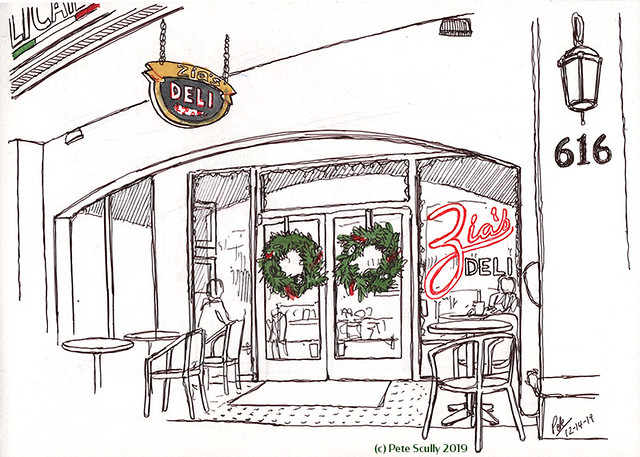 I went to draw Zia’s deli, though I never got around to finishing it so it stays like this. I wasn’t feeling that energetic that day (I had just gotten over a cold I caught in England a couple of weeks before – these days I’d need to quarantine myself for ages if I felt like that again) so after standing for over an hour sketching a Christmas Tree I had little zap left, so I rested and went inside to look at pannetone. I love a bit of Italian pannetone at Christmas. Then to finish off the day I sketched the glorious orange trees near the Union Bank. 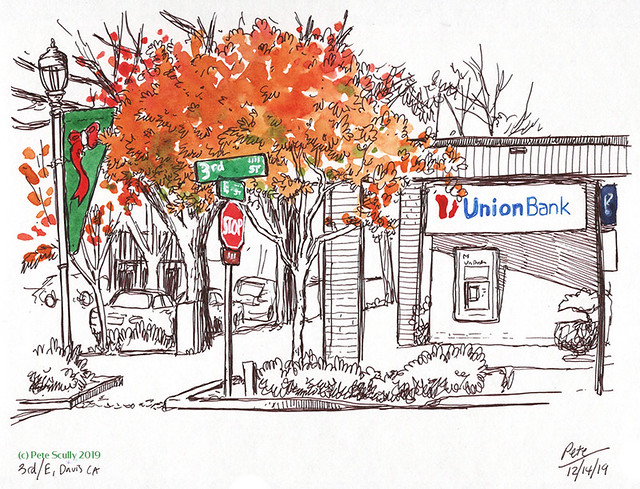 Here are some of us who finished off the crawl, this is Jim Coulter, Allan Hollander and me with my iPad (this is another pic by Marlene Lee from the FB page). 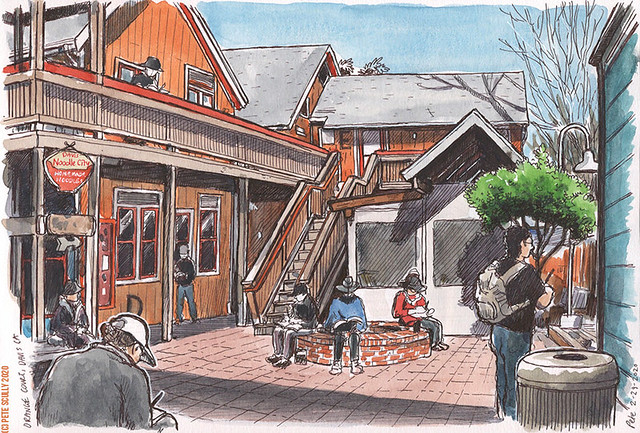 And so bringing us into the Present Day. Present Day? February 29th was just over a month ago, but if that wasn’t the longest month in the history of months I don’t know what is. March 2020 was a bit crap, but we closed out February with a lovely sketchcrawl down at Orange Court, one of my favourite spots in Davis (because it’s where you find Sophia’s Thai Kitchen, my favourite food in Davis). We had a good turnout, and as it turned out, this would be the last bit of social gathering for a while.

We were supposed to have a sketchcrawl in March at the UC Davis Arboretum, but that got cancelled, along with everything else everywhere. We now live in Shelter In Place world, with no end in sight, so perhaps the next Let’s Draw Davis sketchcrawls will be virtual. In fact, I’m going to look at my calendar (yeeeeep, seems to be free) and schedule one soon. It’ll just be drawing the view from your window or something but hey, that’s something. Ok, I’ll announce that soon.

Phew, that was a long post! The next one will be shorter, and then there will be another long one, and that one will have more of the silly nonsense like in the one about 1980s/90s British kids TV shows, but will probably be about X-Men or ramen noodles or something.