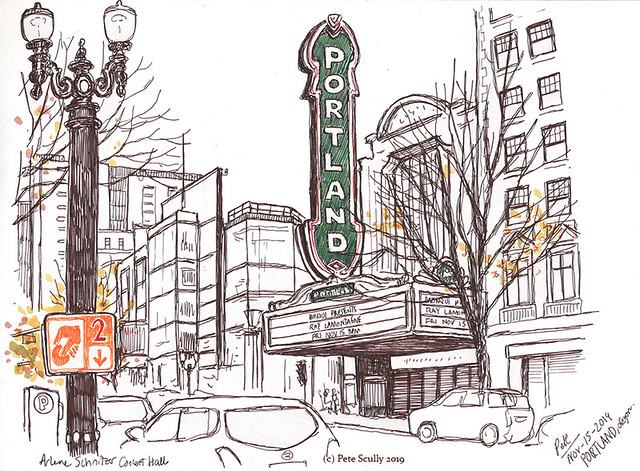 Last November after the Fall soccer season had ended I decided to take a weekend away in Portland, Oregon. It’s going to be a while before we can just take weekends away again huh. I’ve come up to Portland a few times in the past, usually November time, for a short break away from Davis, and I have good sketching friends up there going back to the first Urban Sketching Symposium in 2010. There is good food, drinks, bookshops, old buildings, falling leaves, comics, and generally lots to do. I stayed right downtown this time around, a good choice although I discovered that the food carts around 10th and Alder that I like to go to have been moved on due to construction of a huge building on that site. Boo! The nice folks at Finnegans Toys told me where to find some good food carts nearby though. I always like to get a nice hot Thai meal. Anyway, this is the Arlene Schnitzer Concert Hall, which is a good thing to draw in Portland because it says “Portland” on it, and you can put it on the top of your blog post when writing about it six months later. My sketchblog is becoming like Marvel Unlimited, everything is added half a year after it first came out. 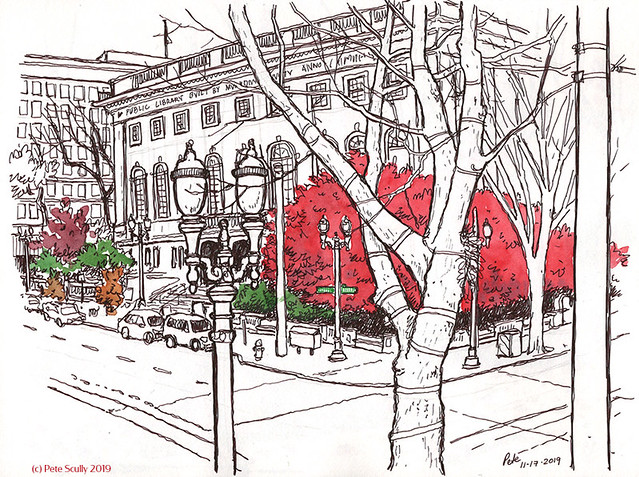 I like the autumnal colours. Or the Fall colors if you will. I was maybe a week or two late for the brightest blooms, and many of the trees were leafless already, but a few patches of autumn brilliance were still there. Grey skies, short afternoons, and brilliantly coloured leaves give me a cozy feeling inside, like 4:45pm on a late October Saturday afternoon in England as the football results come in (that is by the way the best time of day ever). Above is the Portland Public Library. I came in for a while, I like libraries (again, going back to those grey Saturday afternoons when I was a teenager and would go to libraries across north west London looking for books about languages and places far away). Around the corner, behind the Arlene Schnitzer, there are several blocks of park leading down to Portland State University, lots of colourful foliage still blazing. I drew the Shemanski fountain (below). 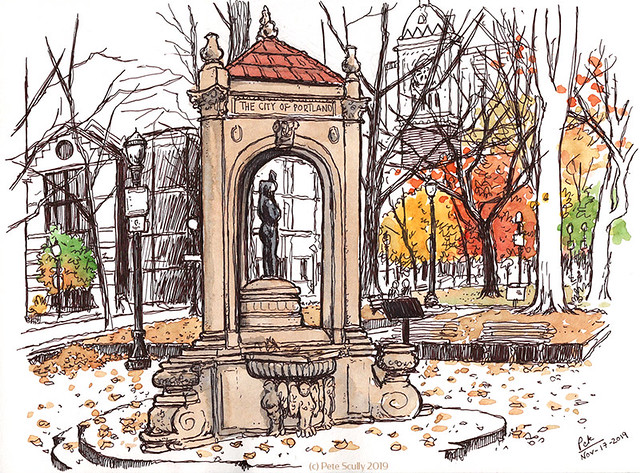 On the Saturday morning, I joined the Portland Urban Sketchers for a sketchcrawl at the Hawthorne Asylum Food Carts. We met at a cafe, there was a pretty good sized group, and before sketching everyone went round in a circle and introduced themselves, saying who their favourite artist was. There were lots of artists I had not heard of. When it was my turn, I said my favourite artist was Gerard Michel (he is too). We walked over to the Hawthorne Asylum; most of the carts were closed as it was early, but by lunchtime when we were getting done they opened up, and I had a pretty amazing egg/mushroom/cheese thing in a waffle, even thinking about it makes me hungry. 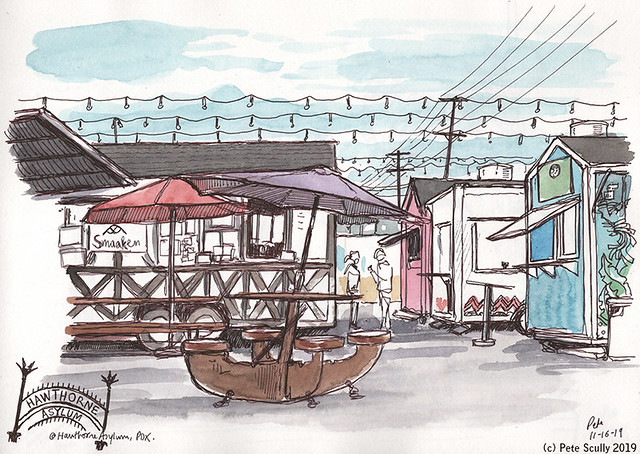 Here’s what I drew. I also sketched sketchers (below!) and had some very nice conversations. We passed around our sketchbooks and wow, there were some incredible sketches, very inspiring. That’s why we do these sketchcrawls, we come away with ideas after seeing how other people produce such great pieces of artwork.

I was a bit ‘meh’ about my own work that day, I felt a bit mechanical and rusty, but I did also draw something mechanical and rusty (below) which I did like. I didn’t colour it in though. I’m not sure what it was but I suppose it must be a robot from the future. 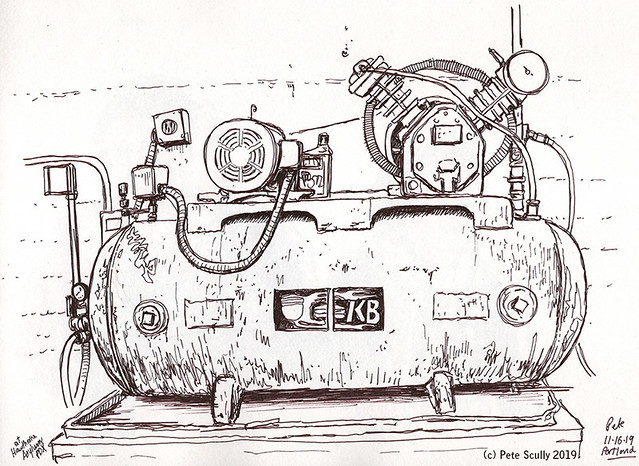 After lunch, I walked up Hawthorne (a long old road) and reached my final destination, the Bagdad Theater. This is a McMenamin’s-run place, a restaurant and cinema, and I was coming to watch Jojo Rabbit (what a great film, one of my favourites and I’m so glad I saw it somewhere so incredibly cool). Anyway, my iPad was still very new, and I had not used it much to draw with in ProCreate, not outside anyway. So I had an hour and a half before the film started, time enough to finally draw this building I have wanted to sketch for almost a decade. The iPad was a fun way to sketch, and I learned a thing or two that day. Firstly, layers are really helpful! Secondly, white lettering on dark backgrounds is so much easier this way. Third, I can do the sky separately and using very different brushes to make it look more like actual cloud. I also learned that a bit more experimentation in how to colour will be very helpful. I very much enjoyed this sketch. 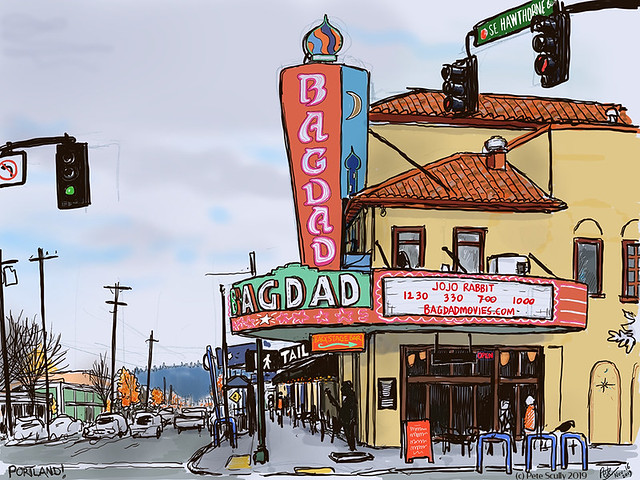 I didn’t enjoy the street musician much though. Some young lad with an electric guitar and a microphone and an amplifier was stood right outside the Bagdad’s doors playing and singing. It was very loud. It wasn’t very good. I’m not being judgy of his musical talents, it may be better than my drawing with an iPad, but only one of those is being blared out around the street. A staff member from the Bagdad came out and asked him not to play there, as he was disturbing people inside. Naturally he got very lary and gave it all that, getting in the staff member’s face in that way that indignant young males of the species do when a female politely asks them to maybe not be so loud outside their business which is not only a restaurant but also a cinema. She went back inside and he continued for a bit longer. He was very loud, and used the microphone to tell the rest of Oregon that her request was illegal and that he had a right to play his music loud right there. Right or wrong, he must have realized he was perhaps being a bit of a dick because after ten minutes or so of occasionally singing – mostly vocalized ranting about the injustice, and reminding everyone that this is America – he decided to move along the street, to a spot about six feet away from me, and then proceeded to yell over the microphone about people who only live in Portland because they saw Portlandia, and the woman who told him not to play outside the Bagdad was breaking the law, and then a few conspiracy theories Thrown in there, and then onto how we’re all sinners and Christ was coming to reckon us or something, and guys this felt like a long bloody drawing. How I didn’t just turn around and pull the plug on the amp I don’t know. But eventually he packed up and sodded off, and I finished my sketch and went to see Jojo Rabbit. The movie was great, was the theatre was amazing, historic and grand, and you can grab a beer and order food and actually have it delivered to your seat while you watch the film! I had pizza.

I also drew several bar sketches in Portland but maybe I will compile those together in a different post.