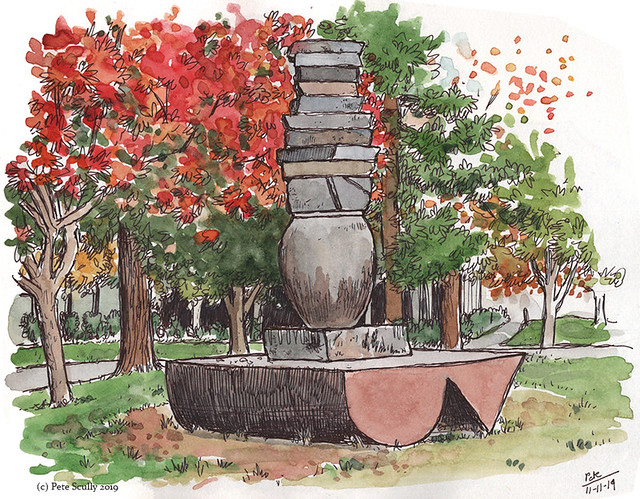 Remember before social distancing? I would go out, staying away from everyone, sketching places without any people in them, and that was just normal. Now social distancing is the norm, along with a whole load of other words that we now know. Social Distancing will be the Time Word(s) of the Year 2020, I suspect (and we thought it would be Impeachment) (but that particular horse has a fair few furlongs to run yet), but there’s also “Zoombombing”, which I think is a genuinely new coinage, the practice where unwanted miscreants get into your Zoom meetings and perform perfidious profanities; “Shelter-In-Place”, which I’ve only ever had to do when there was an active shooter in town (America, folks! They love a gun); “Self-Isolation”, and its related verb, to self-isolate, which is like Luke Skywalker on that island that sounds like a sneeze, or Obi-Wan on Tatooine, or Yoda on Dagobah – basically you do it and pretend you are an old Jedi; I have also seen the word “immunocompromised” become more widely used, I had never thought of that word before, it could take up almost two Countdown Conundrums. And then in France you have the “Attestation de déplacement dérogatoire“, which is a form you must complete (France!, folks! They love a form) every time you want to go outside your house, and you can’t for example go more than a kilometer from your home if you are out exercising or walking the dog. The Attestation is just a part of life in France now, and will probably be their Mot de l’Année 2020. We all gotta do what we can to stop this thing. Stay at home when you can folks. 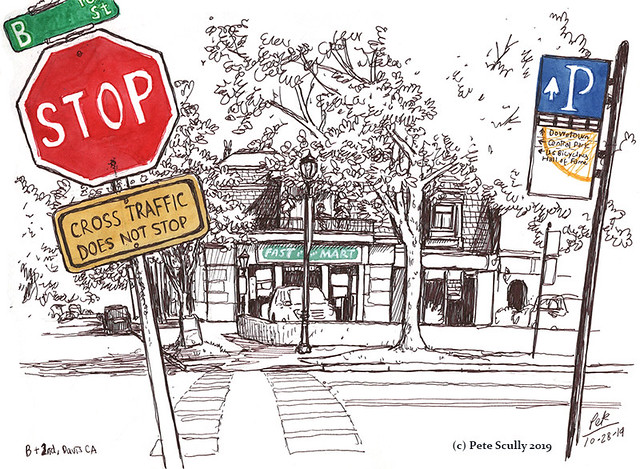 But here are a few more sketches from late 2019, a golden age for going out and (in my case) avoiding people, as I catch up on posting the sketches that backed up. It turns out that was probably a good thing, as it gives me something new to post that isn’t a sketch of my living room. Although I will say, that living room is going to be my St Victoire (also I do have a poster of St Victoire on the wall of my dining room). The sketch at the top is a sculpture outside the local library, near where I live. This was in Fall, when the leaves were red, outside the library where the leaves were read. JOKE OF THE YEAR 2020? Maybe not. Besides it references something from 2019 so it cannot count. Also it’s just not very good.

Incidentally do you want to hear my personal joke of the year funniest thing I said in 2019? Ok here goes. Don’t laugh ok, I thought it was funny. My wife and I were watching TV and on this one advert there was a young horse who needed rescuing from a road. She said, “I feel sorry for that baby horse”. So I said “I pity the foal.” Cue laughter, at which point I stood up and waved at the living room and left the room, you’ve been great folks. It’s right up there with “Missouri loves company” and “some day my prints will come” in waiting years for the perfect situation to come up to use those lines.

But in the sketch above, at the cross-section of 2nd Street and B Street, I was really hoping for some kind of road-rage incident involving an annoyed (not angry exactly, just irritated, unhappy, let’s say cross) motorist not stopping and causing some sort of, well not an accident for sure, I don’t want that, but something where they cause more annoyance, like they have to go around someone and everyone gets in a huff, and then I can say well the sign does say, cross traffic does not stop, so your mood at that moment determines whether or not you need to be the one that stops, just as the sign says. But that didn’t happen, and it’s just as well because it wasn’t very well thought through. It’s no “I pity the foal” is it. 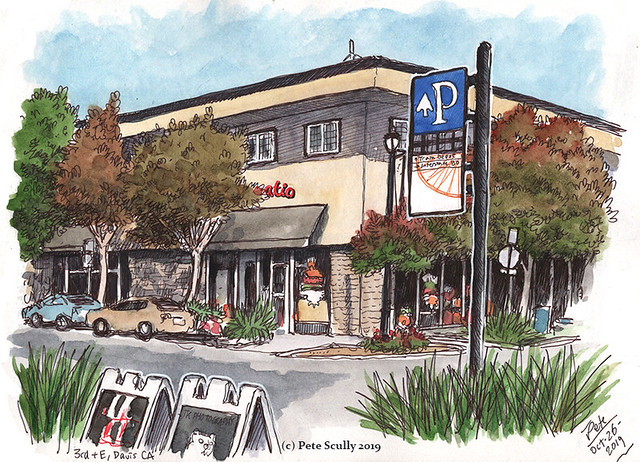 Further down 2nd Street on a completely different day two days before, I sat with a cold beer outside Uncle Vito’s, on the corner of E Street. Our AYSO team the Blue Guys had won an exciting 10-5 game against an excellently named team called the Black Goats that day, and I had the afternoon to go cycling and sketching. I miss the Saturday-afternoon-after-the-game feeling. Now our Select soccer season has been cancelled, it’s left a big gap. I’m still watching videos and reading about tactics and training plans. By the way the big blue sign with a “P” on it is I presume pointing people to where the toilets are. 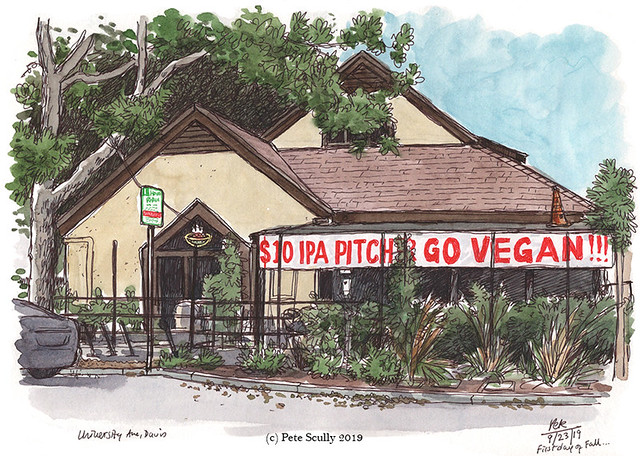 A month before, I drew this restaurant on the corner of 3rd Street and University Avenue, called Pho King. I know, I know. Don’t tell De Niro, he’ll make a ‘comedy’ movie out of it. They have a big sign on the restaurant (I don’t know if you can make it out) that says “$10 IPA Pitcher Go Vegan!!!” Again my mind was trying to put this into some sort of joke, where there is a baseball game and the pitcher’s name is Vegan and he plays for a team with the initials I.P.A. (Industrialists of Pennsylvania? Icelandic Philologist Academy?), but again, it’s no “Missouri loves company”. I’m still not stooping down to making Pho King jokes though, unless a shop called Tories opens next door. Incidentally I’ve never eaten here but I really like Pho so I will try it out. And if it’s not as good as expected, I might say “I pity the…” 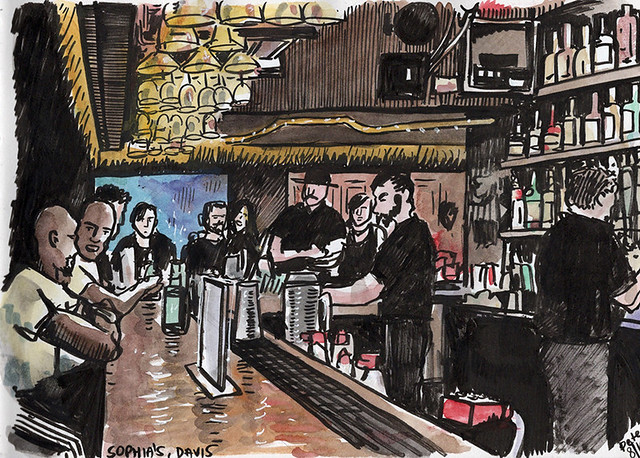 No, I won’t. I tell you what though, I really like Thai food, and my favourite is Sophia’s on E Street. We get food from there all the time. I do like their bar as well, a really nice place to have a cocktail, to sketch and, yes, talk to actual other people. I’m not always a complete social-distancer, sometimes I will converse and speak and stuff. This was back in August (!) and I was still trying to use those brush marker pens more. This is a great place for those because the lighting in Sophia’s means there are much darker areas to fill in, making the values really stand out. I just really like it there. Oh man, I miss going out to the pub to sketch. This was a nice evening, I did speak to quite a few people and sketched several others too, but I’ll only post this one, which I sketched across the bar, a couple of people talking to each other in front of the big blue fishtank, I caught snippets of what they were saying. I just automatically assume they were making pun-like jokes about something, but I don’t really overhear conversations well, I’d have made a terrible Stasi spy. 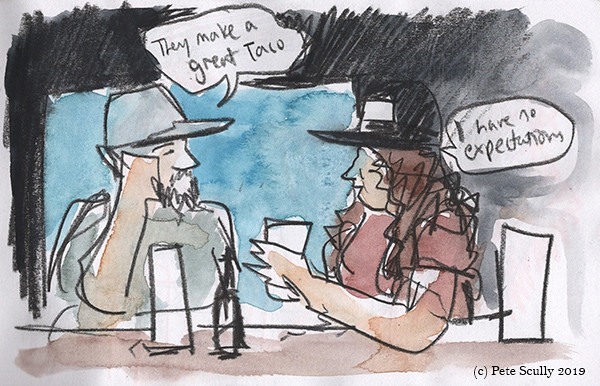 So, here we are in April 2020, staying at home (except for those numpties protesting on the streets in Michigan), and it would have been Picnic Day here in Davis when the kids get out and party it up, but not this year. And now, back to sketching the living room and watching old World Cup games. I watched England v Argentina from 1986 a couple of days ago. I think tonight I’ll watch Italy v Nigeria from 1994. Stay home and stay safe everyone.