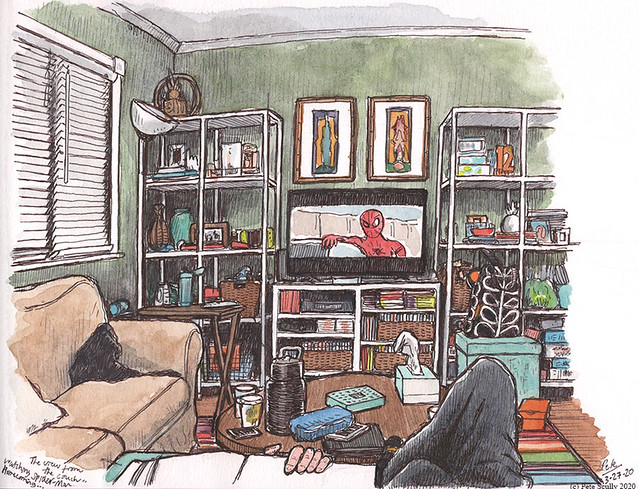 The confinement continues. I don’t watch the news, not as much as I should, but I watch the numbers, and the numbers aren’t looking great. So I sketch. I’m really drawing this house a lot. It’s relaxing to sketch. Above, the view from the couch. We were watching Spider-Man Homecoming, which is one of our favourite films. We had just watch the original Tron movie from 1982, which I had never seen before, and I must admit I wish I had not seen yesterday either. It was not just the early 1980s slow computer generated scenery, surely technically advanced for the day (though even as a kid, I remember it looked naff and didn’t really want to see it), but the uninteresting story and barely perceptible storytelling. The only thing I enjoyed about it was that the bad guy was played by Evil from Time Bandits, David Warner, whose voice I could listen to for hours. He actually played two characters, a human bad guy who looked like Arsene Wenger, and an computer-game bad guy dressed like a cybernetic prawn. Other than that the movie was just bats, and gave me a headache. So watching Spider-Man afterwards was much more of a palette cleanser. 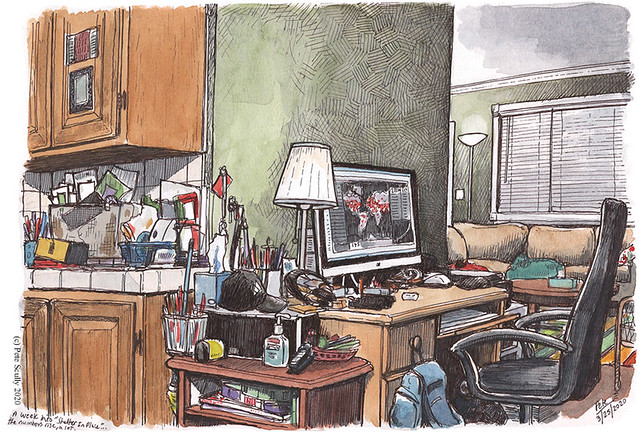 Above, this is my desk area. Working from home, this is where I sit. I’m there right now too. I’m here a lot. This was another late evening sketch, drawn from the dinner table. On the screen are the latest coronavirus numbers. Even though this was only a few days ago the numbers are so much worse; we are no closer to flattening this curve. Not going to lie, I’m very much not enjoying this whole timeline. And like you all, I’m snacking way more while at home, so there’s another curve I won’t flatten. I haven’t been for a run for a few days, mostly because I am staying up too late (sketching, and worrying) and feeling too tired next day. I keep saying to myself, I’ll go to bed earlier, I’ll get up early, run before breakfast, energy and positive for the day. But I find it’s harder than I think. 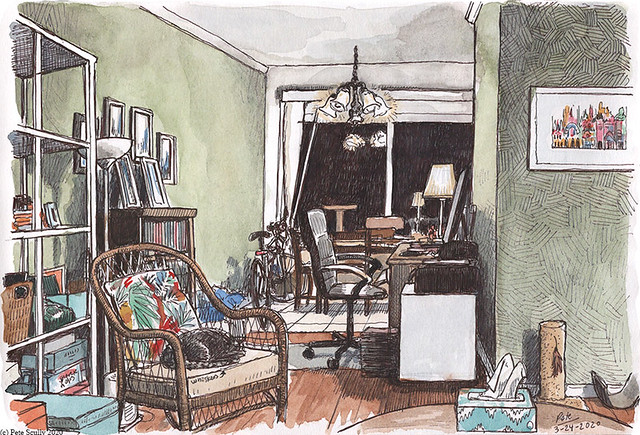 Here is the other view from the couch, looking at the desk and the table behind it. That box of tissues on the coffee table is in each picture. That coffee table is nice and big. We used it tonight to play Carcassonne. I just got that game last week as something new we could all play together. I really liked it, I want to play it more. I’ve never played it before so we are still learning. I’ve not really played any of those European-style table-top games before. Any more time at home and we’ll end up playing loads of them. I hope you are all doing well out there, at this crappy time. Let’s hope we’re out of this soon.