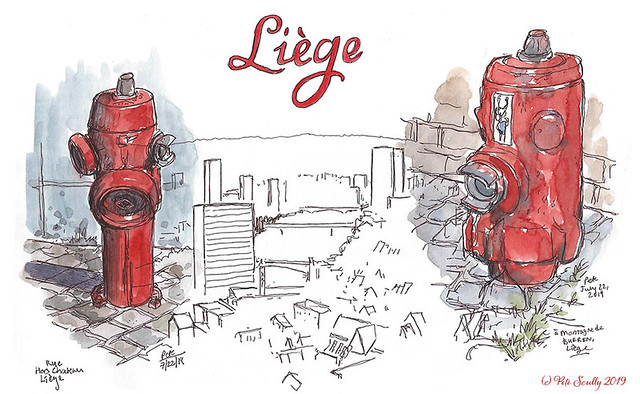 I took the train across the linguistic divide that cuts Belgium in two and landed in Liège, a city I had last visited in the final months of the twentieth century. I was going there for exactly 24 hours, to visit my long-time urban sketching friend and art hero, Gerard Michel, and also sketch with some other Belgian sketching friends. Liège is a fairly big city, larger than I remember, and the architecture is very Walloon, lots of brick houses and steep hills. Gerard and I went for a morning walk around his neighbourhood, up steep paths and down long stairs, overlooking rooftops and spires and trees and the great river Meuse. Liège is a lively city, with a lot of atmosphere, a university city, and a very sketchable one, but in a different way to Ghent. We met up with Fabien Denoel, who I’ve known and followed since Barcelona 2013, and Chris Damaskis, as well as Danni Hoedamkers whom I had sketched with in Ghent, and Martine Kervagoret, visiting from Paris on the way to the Symposium, whom I first met back in Lisbon 2011 I think. We sketched up at the Terrasses des Minimes, overlooking the city, and it was very peaceful. I have seen many of gerard’s skethces from up there, as well as Fabiens, but also Lapin’s Florian Afflerbach’s, Nina Johansson’s, all the great sketchers who have visited there before, so I knew this scene well already, and I’m glad to have sketched it myself. 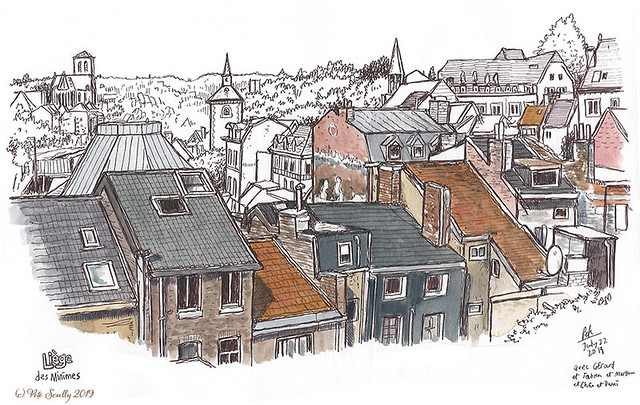 I liked this picture of an apple that I took too.

We walked into town for lunch, going to an old Liègeois cafe called Chez Stockis / Cafe Lequet, near the banks of the Meuse. We sat and chatted in French (I am very rusty), looked through sketchbooks, had cold beer and ate very local food. Most people had these things called ‘boulots’, which are these large meatballs (I don’t eat the meat so I didn’t have those), but I had Tomates Crevettes, which were these little shrimp sat on a big tomato, with frites. The cafe is old and a local favourite, but I heard that it would be closing. In fact I think by now, M. Stockis has closed up for the last time, though the cafe may still be going on (there’s a FB page). The patron, Guillaume Stockis, is there in the background of the sketch below (which is of Fabien Denoel). On the ceiling is hanging the marionette of Tchantchès, a local Walloons character dating back to the 19th century, dressed in his traditional miners’ clothes. You can learn about him here, if you can speak Walloons. This here is the heart of Liège. 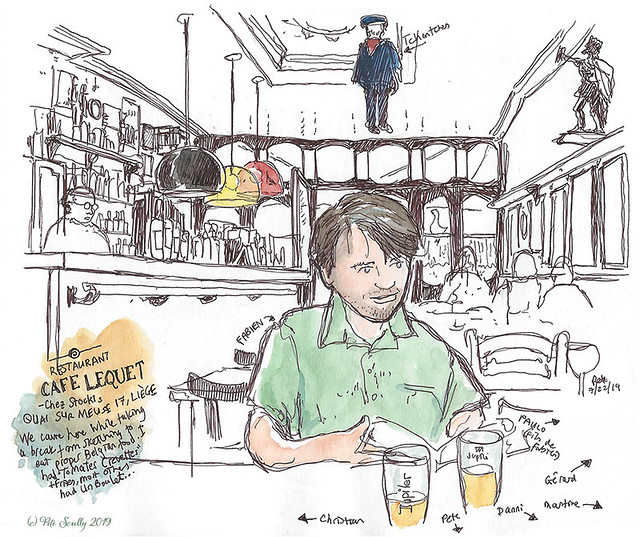 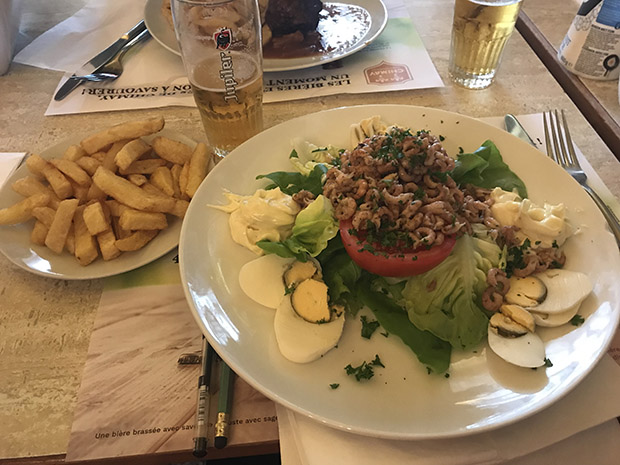 After lunch we walked across the Meuse to the Outremeuse neighbourhood and sketched at the roundabout of the Rue Pont St Nicolas. It was getting hot, the heatwave was coming in, and regular cold drinks were necessary. I sat next to a Friterie – the Friterie Tchantches of course – and drew as best I could. I also wandered about a little, as I had learned (from one of Gerard’s sketches) that the best waffles in Liège were at a place just across the street. Sadly it was closed, so I had one from a chain nearby, which was not as good. The waffles of Liège are a bit different from the waffles of Brussels, usually smaller and rounder, and they remind me of that Belgian film Rosetta, which I saw back in 1999 when I was in Charleroi, a story about a young woman in Liège who at one point works in a waffle truck. 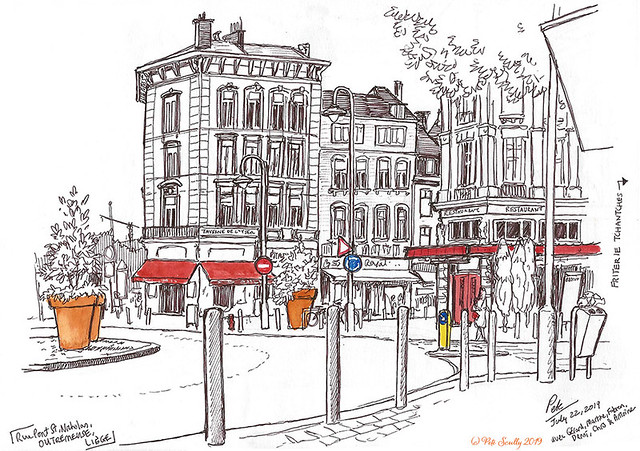 Going back a few hours, the sketch below was the view from the guest room at Gerard’s house, I had woken up early (jetlag), and needed to practice the sketching. The bells at the local church were playing Bob Dylan, Blowin’ in the Wind, which always reminds me of when I lived in Belgium, when I listened to Bob Dylan a lot, and that was the first song on the CD I had bought. I would listen to that when looking out over the rooftops from my 13th floor room, so perhaps this was the universe welcoming me back to Wallonia. 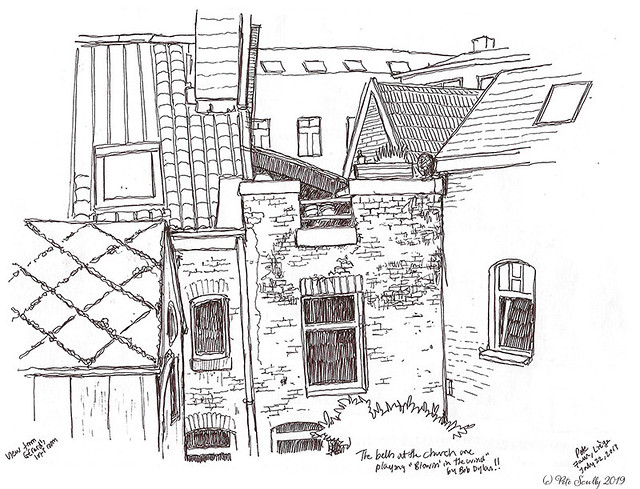 And as you know, I like to draw fire hydrants, so I drew three of them in Liège. And here also is Gerard, on the steep Montagne de Beuren, showing me the spot where he had once drawn a spectacular 360 degree picture of the whole scene – he gave me a print of it a decade ago, I do love it. It was funny seeing the real place in real life. 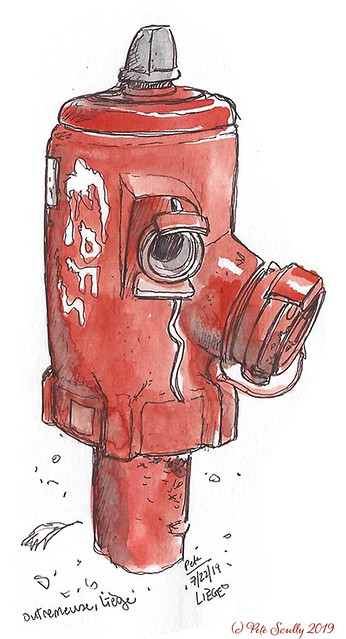 Here is Gerard’s sketchbook, and as you can see I show up in it twice! A huge honour. I’m wearing my 1984 classic Belgium shirt, crouching over my book as always.

After sketching the roundabout, I walked down to the shade beneath the bridges crossing the Meuse. There was a smell of wee. The footbridge is the Passarelle Saucy, and I think I remember this bridge from that one time I came here twenty years ago, but I don’t remember it being called Saucy. What a brilliant name for a bridge. And no, I won’t be doing any sauce or saucy based jokes here. 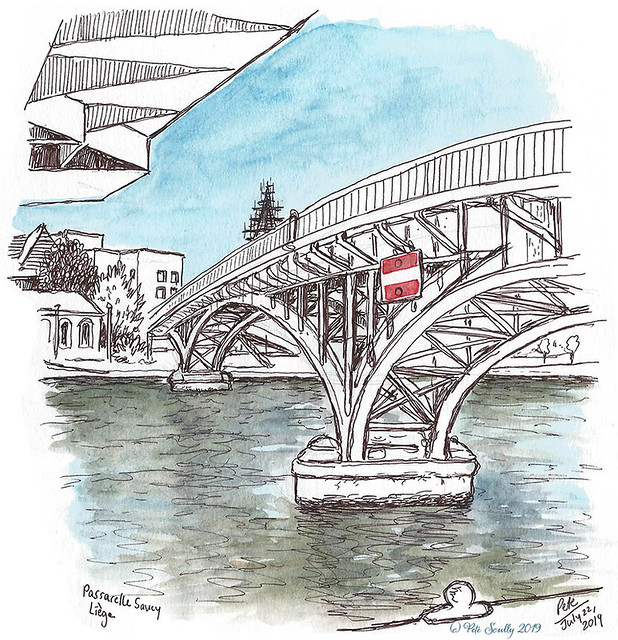 We crossed back over the river, walked about the city-centre a bit, before stopping off at the Place St Denis to draw the side of the church there. The weather was really getting hot by now. Gerard’s son Antoine joined us, I’ve met him a number of times. It was nice having dinner with Gerard’s family at his home the evening before, he made a really delicious chicken meal. I was delighted to take a look at his sketchbook room, his inventions, and we looked through a large map book of 17th or 18th century Belgium with Fabien, scouring it for every village; a small country with a big and detailed history. Belgium has only been the country of Belgium since 1830, but every area has a long hisroty, often of being ruled by some foreign power like the Habsburgs, or the French, or the Dutch, or the Spanish; Liège for many years was ruled by the Prince-Bishops of Liège, the princes-évêques, and the next time I am here I will draw the magnificent palace that still dominates the skyline. This is also, possibly, the city of Charlemagne’s birth, though nobody knows for sure. It might be Aachen, which isn’t far away, and was his capital. The city I was in the day before, Ghent, was the birthplace of another great Holy Roman Emperor called Charles, whose name lives on in one of my favourite beers, Charles Quint (Kaizer Karel). 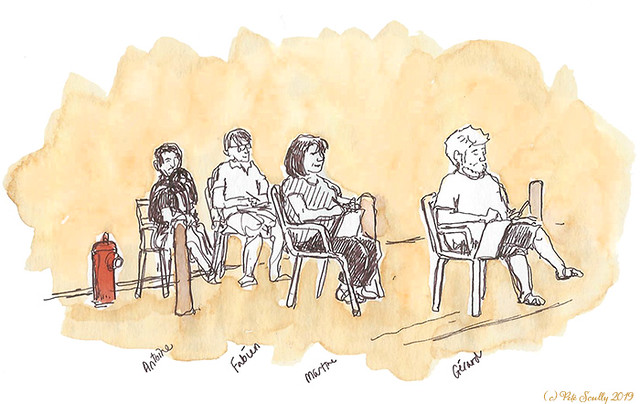 The Church of St.Denis dates back to the late 900s AD, founded by someone called Notker of Liège. I added the colour later on the train out of town. I spent exactly 24 hours in Liège. We all went for a cold beer in the city square, before Gerard took me to the station, the phenonemally futuristic cathedral of Guillemins, and I just made it onto a train to go back in time to Charleroi. A la prochaine fois, Liège! 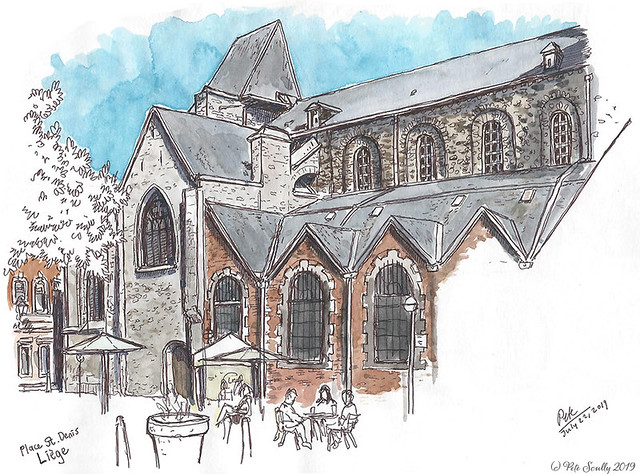 2 thoughts on “looking over liège”