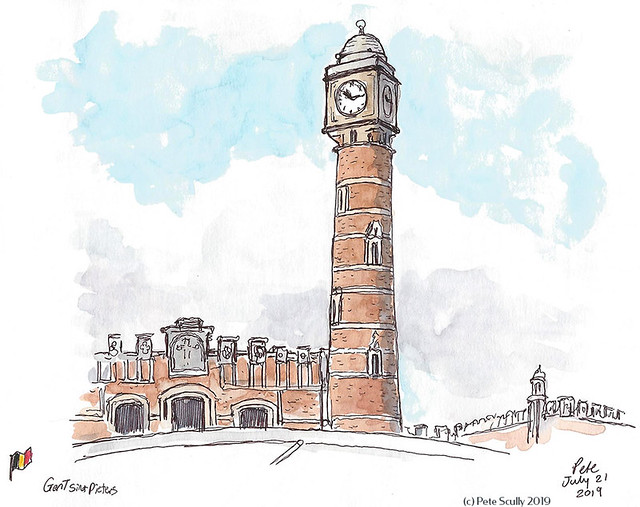 Despite living in Belgium for a year twenty years ago, I had never been to Ghent before. Well, I did go there once, on the morning train from Charleroi, but I had not really slept the night before and was so ridiculously tired that I decided to call it quits and head back home to bed, so I don’t remember a great deal. I think part of that is that Ghent is quite big, and the city centre is a good long walk from the train station, and in the year 2000 I may not have been as good at reading maps as I always believed (“flight of the navigator” my friends used to call me). I’m a lot better at that now. I have an Apple Watch that tells me where to go, making little vibrations to tell me to turn left. This time however I did one better, and met up with a local (well, local to Flanders), fellow urban sketcher and USk-symposium-goer Danni, who showed me around, and we met with another local Ghent sketcher. I took the train from Brussels Central up to Ghent (known as Gent in the Flemish), locked my stuff away in the luggage lockers, and sketched the station Gent Sint Pieters, which is a pretty nice building. The weather was nice, it was warm but not yet hot – it was going to get ridiculous in the next couple of days. It was also, I learned, the Belgian National Day, which seemed like a big surprise to most Belgians I met. I was wearing my Belgian national team football shirt, but I was the only one wearing it. I learned a bit more about Flanders from Danni, and listened out for the Flemish language – it’s Dutch, of course, but it definitely has a softer sound to it than Dutch. I can only speak a very little and I can read more than I can listen to, but I like the accent. When I was in Belgium I only really encountered Flemish when visiting Brussels, or on the labels of drink cans, so my attempts to learn it fell a bit flat. Everyone I met who spoke Flemish spoke English, unlike in solidly Francophone Wallonia. I had been to Bruges, Antwerp, Ostend, Leuven, but Ghent eluded me, and after visiting it I realized what I had been missing. Ghent is amazing, and so sketchable. Now as I say, it was the Belgian National Day, because the calendar said it was, but Ghent was bustling for another reason – it was the week of the annual Gentse Feesten, a huge city-wide festival with music and food and drink, and of course loads of people. I was sketching in the earlier part of the day so was likely to miss the big crowds, but as it turned out it was not so bad, and pretty fun. I knew where I wanted to sketch first – the view from the St.Michielsbrug, which probably needed to be a two-page panorama, but I would perhaps have needed a seat for that, and a couple more hours. 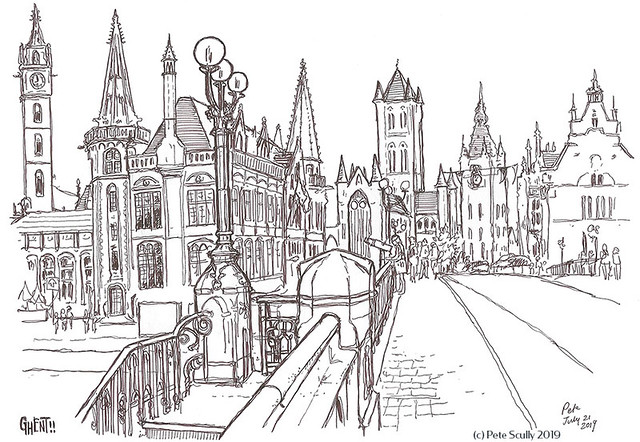 I mean, have a look at that, what a spectacular view to draw. You should see left and right of this view, it continues to be dramatic. Another one to eventually go back and draw even more of when I have, you know, all the time in the world, and the money to pay for that time. I’m happy for what I have. To be right there, in my favourite little country, in a part of it I had never explored (except when sleepwalking twenty years ago), with a sketchbook in my hand, pretty much the meaning of life. Knowing that good food and drink is nearby, and people to meet, stories to learn, it’s a good feeling. I think people – British people certainly – have always shrugged at Belgium as some boring country of bureaucrats with nothing there but grey skies and trenches, and that’s fine, keep thinking that, I know there’s a country of endless character and history, always something to explore, in a very small area. If I had the time I would just go town to town with a sketchbook and document the whole country. If I did I would be so full of frites and chocolate and beer that I’d need to spend a month in the gym afterwards. Alternatively, I could cycle – that is Belgium’s national sport after all. Oh they love the sport of cycling here. Then again, I remember what the drivers were like in Charleroi, so I would need quite a lot of health insurance. 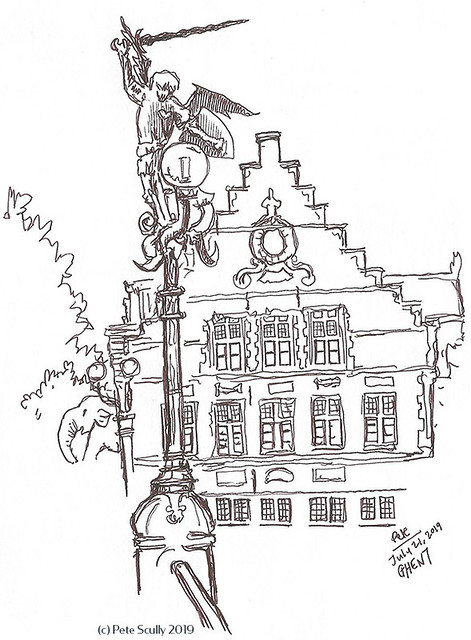 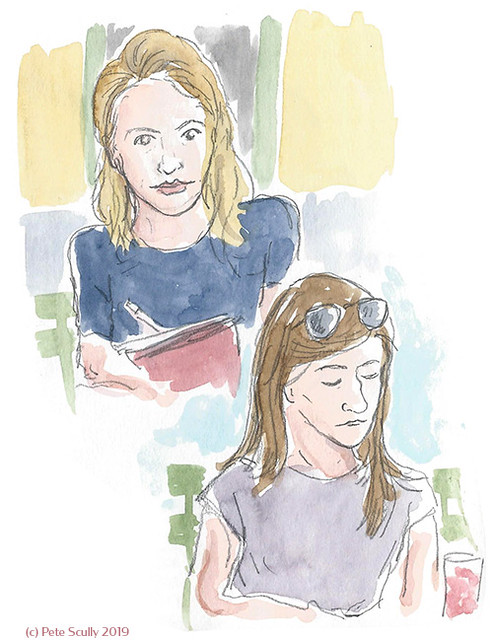 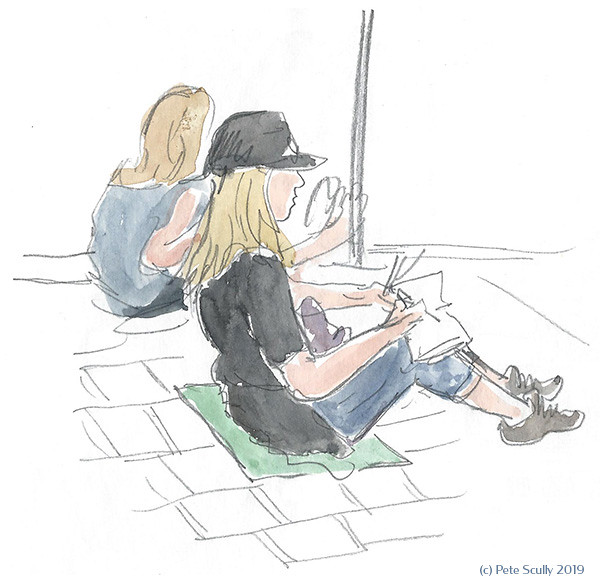 Here are my fellow sketchers, sketching away outside the Gravensteen castle, a little further down the riverbank. That’s the castle below. Very much a castle. the ‘Castle of the Counts’. As per usual with sketching days, I didn’t go inside the historic building, but sketched the exterior from across the street. Count Philip of Alsace built it back in the twelfth century. According to the Ghent tourist website he ‘wanted everyone to know that he was the boss’. Ok Count. More and more people were coming into Ghent at that point for the Gentse Feesten. I was going to catch a train to Liege that evening, so I could not stick around to party like it was 2019 with the locals. 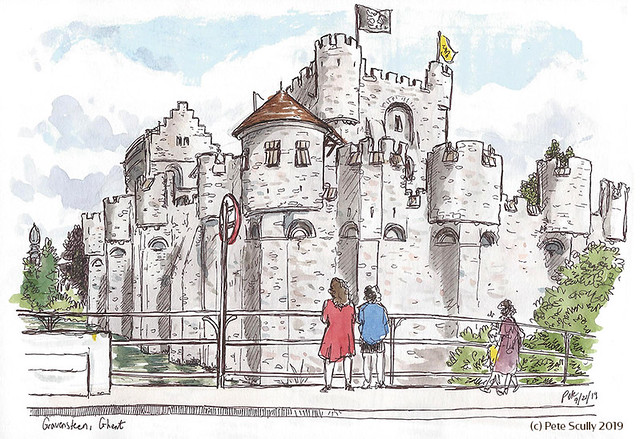 I did go and try the local specialty though – Waterzooi. Again, something I had never eaten in the whole year in Belgium. Look when I lived in Charleroi I had no money so I ate cheaply, which meant frites in sauce and brochettes de dinde. Lots of them. I didn’t do anything fancy, I only had mussels a couple of times. So I was looking forward to proper Gentse Waterzooi. It’s a kind of stew, and I had it with chicken. It was very nice, but it was nothing fancy, and that’s how I like it. Belgium is all about nothing fancy. Belgium can do ‘fancy’ – look at the chocolate! – but really they are quite a down to earth bunch, and Waterzooi felt like that, a big stew to warm you up when it gets cold.

It wasn’t cold though, and there was one more old place I wanted to visit before hopping back on the train. The Cafe den Turk is Ghent’s oldest brown cafe, dating back to 1228 (AD not PM), so we popped in here and did a quick sketch over a nice cold Gruut Blond, a local beer. ‘Brown Cafe’, that is what they call these old pubs in the Dutch-speaking world. If I had a couple of hours, I’d have probably made a much browner and more detailed drawing, but I settled for this, and the experience. I listened out to the Flemish, tried to pick up a few words, but I have since forgotten them. And that was Ghent, a pretty nice city. Next stop, across the country to the east of Belgium, and the big French-speaking city of Liège… 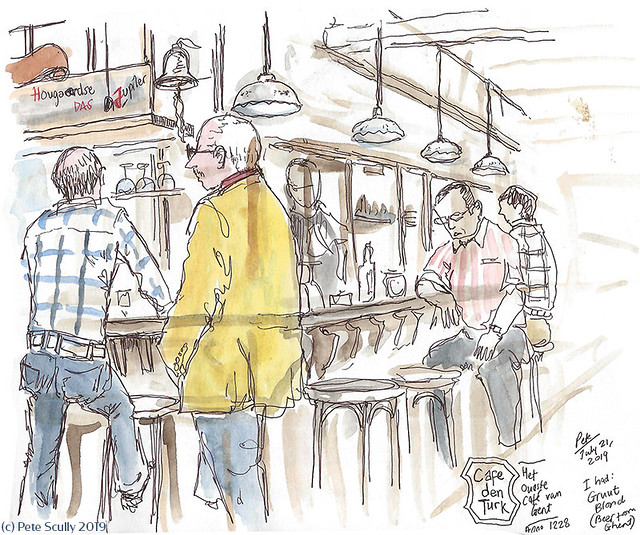 4 thoughts on “gandering around ghent”