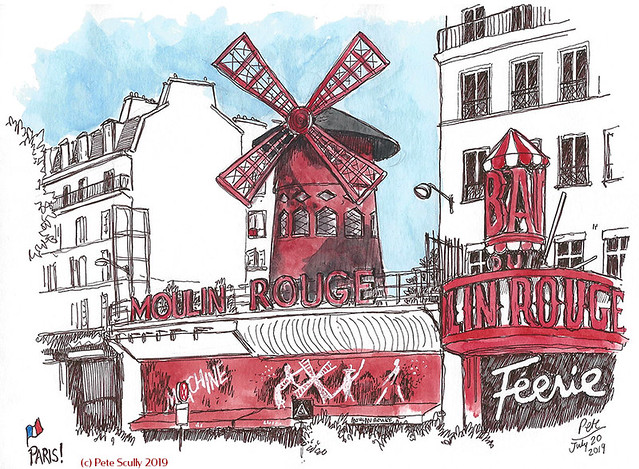 I really like Paris, but it has always felt like the city I never really got to know very well, and is better friends with other people. It’s not really very far from London, its history has long been bound up with every other country around it in some way – if Paris sneezes, Europe catches [insert whichever virus is trending that year], and yet from Britain it felt a world away; funny how the British see near neighbours. “Paris m’est inconnue“, a line I remember from Cyrano. My time spent in France was mostly down in the far south, which is why my French accent is so different (see also my time in Belgium, more on that in the next posts) (actually the real reason is that I’m just not that good at French) (I do have a degree in French though). But in all the times I have been to Paris, I realized that I’d only ever been there by myself once, and that was over 20 years ago, for the day, on my way elsewhere. I had been as a 13 year old kid on a day-trip with school, when I first entered Notre Dame and felt the cold ancient stone, and our bus went past the Moulin Rouge. I went when I was about 20 with a girl, that didn’t really work out, and all I really remember now is when I decided to go for a late night wander by myself and walked all over the city, exploring Paris after dark fearlessly and completely without any sort of map. I went another time (with another girl) and I remember going to Pere Lachaise and up Montmartre but little else, it was a long time ago. My solo visit was during the World Cup 1998, as the opening part of my summer-long European rail journey, and I spent the evening watching Brazil beat Holland on a big screen in front of the Hotel de Ville. I never went back, save for changing trains to catch the Eurostar, until my family and I went in 2012 when my son was quite young, and that was my favourite Paris visit, hitting many of the sights, watching Les Guignols in the Jardins de Luxembourg, and taking my son on all the metro lines because he liked being on the train. I really like Paris but have rarely been on a solo trip. And this day, well I was by myself, but it was another day trip. However I was determined to just wander about one area only, the steep hill of Montmartre. I landed at CDG, took an RER to Paris Nord, and set out on foot. And when I arrived on rue Pigalle, on the leafy traffic islands flanked by sexy DVD shops and nightclubs, I saw the one thing that reminded me I am back in France – a man pissing openly in the street, and nobody caring. Some things don’t change. That was a fairly common sight when I lived in Aix, but back then I was not Californian, and didn’t think anything of it. But hey when you gotta go you gotta go. Later that same day I went to Brussels, whose most famous statue is a boy very happily having a public wee.

So anyway, as you can see above, I stopped on Pigalle, and drew the famous Moulin Rouge. It’s so famous that Nicole Kidman made a film about it. It’s so famous that Rod Hull made a TV show about it, although he watered it down a bit. As I mentioned my French isn’t as great as it should be so I think Moulin Rouge means ‘Mussels in Lipstick’ but I didn’t go in to find out, so instead I just drew the big red windmill that is for some reason on the top. I know that the famous ‘can-can’ dance has something to do with this place, presumably it’s about canned mussels (which btw are fine but not as nice as fresh mussels). The can-can was very popular when I was a kid in around 1980-81, I think it had been released in the charts to compete with Shakin’ Stevens, and I remember at parties in our street people attempting to dance a can-can and kick their legs up high. So anyway I drew the windmill because I figured, I am going to be spending a good amount of time in the Netherlands on this trip, this will be the first windmill of many. Spoiler alert, this was the only one I drew. Incidentally, I decided to put a Gnome – a ‘Nain de Jardin’ – on my sketchbook. We all remember that film Amelie, in which there was a gnome that disappeared and traveled the world sending postcards back as you do. That film was set around here, so there’s a photo of me trying to do as the gnomes do (“when in Gnome…”), and failing because I couldn’t get the focus right on the background. This is filed under the chapter “Why I Am An Urban Sketcher (And Not An Instagram Photographer)”. All that said, I will intersperse these stories with the odd photo, such as this one and also the one of the little pixelated wall-sprite, to flesh out the experience. My little gnome, he is in French colours (or maybe Dutch flag colours), and has the sign of the Euro on his belt. 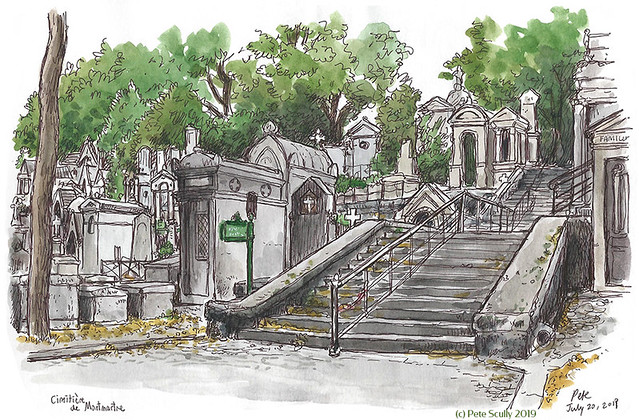 I love the big city. The big city is my natural environment. Put me in a big city and I’m like that video that always gets shared of a dog running out of a car into a lake and splashing around. Not that I splashed around in that bloke’s wee, but I just feel energized being back in the urban environment again. Davis, you ain’t Paris. But even I need some quiet time, so I went to Montmartre Cemetery and got all the quiet time I could want. I had never been there before, and it is quite a place, small and yet massive, with secluded corners and grand boulevards. Part of it runs underneath a bridge. I found a bench and sketched while the sound of trees and wind and crows gently muffled out the distant traffic. Peace and calm. Speaking of crows, seeing crows on gravestones was, I thought, the most gothic thing ever. Until I saw a dead crow on a gravestone. I like cemeteries, I am always careful not to walk across any graves and I’m solemn around the dead. We’re all going where they have gone, some way or other. Maybe not this cemetery though, you might have to be quite famous and French to end up here. I looked at the map showing where all the famous corpses were, most of whom I did not know. Except Adolphe Sax, Belgian inventor of the Saxophone. Francois Truffaut is buried here too, but I never watched his films, despite my degree in French, I kinda turned my nose up haughtily at Truffaut, as one of those film-makers that the university wannabes all said they loved at the pub when comparing coolness. “Oh you think that thing’s cool? Then I don’t,” was how I went about things. Even choosing my location for a year abroad, everyone went to France, so I went to Belgium, to be different. So anyway, I didn’t find Truffaut’s grave, and one day I might watch his films. Whoah…Edgar Degas was buried there. I found his grave. Foucault, he’s there too, though admittedly I know Foucault about him. And Emile Zola! I was impressed there. And Stendhal, I looked for his grave too. And the last name I had heard of was Nijinski, though I thought that was a racehorse.

After a couple of hours spent among the dead, it was time for lunch. I climbed uphill into the windy streets of Montmartre, and found a nice little restaurant called Au Claire De La Lune, on Rue Poulbot. I sat outside, the most Parisian of settings, with a surprising lack of foreign tourists, everyone around me was French. I had sole with bearnaise sauce, and a Kronenbourg 1664. This was a good day. 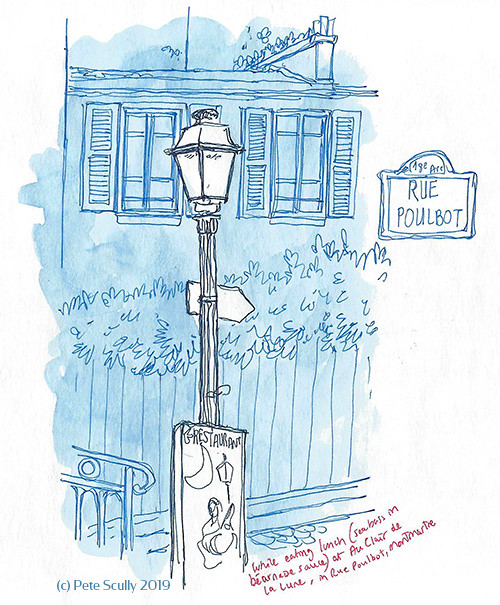 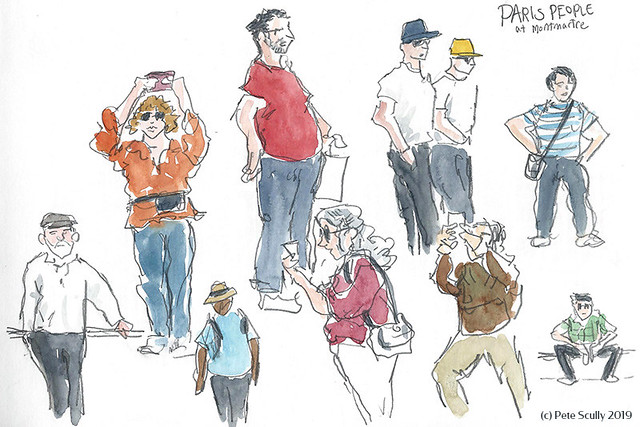 And finally I had to wander the streets around Sacre Coeur. I’m a big fan of Sacre Coeur, although I must admit, I have never been inside. I never gave myself time. I had time to sketch though, and I was pretty pleased with what I drew. The sky had character, and the view up to those white domes is one of the most iconic in the world. The view across Paris is jaw-dropping, but you can see the fire-damaged Notre Dame, missing the famous central spire. I didn’t go down to see what has happened to those ancient stones in that awful fire, but I gave her a nod of respect from afar. 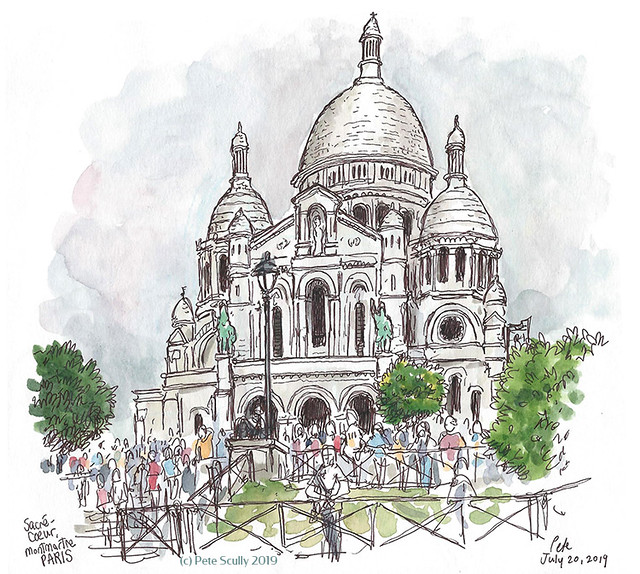 And that was all the time I had. There was a train to catch, the high-speed Thalys, taking me to Brussels, a city I had a lot more history in, a springboard for a few days jaunting about Belgium, that country of rain, chocolate, frites, rain, moules, beer, and rain.

What I didn’t know was that it wasn’t going to rain, but it was going to get hot –  very, very hot.