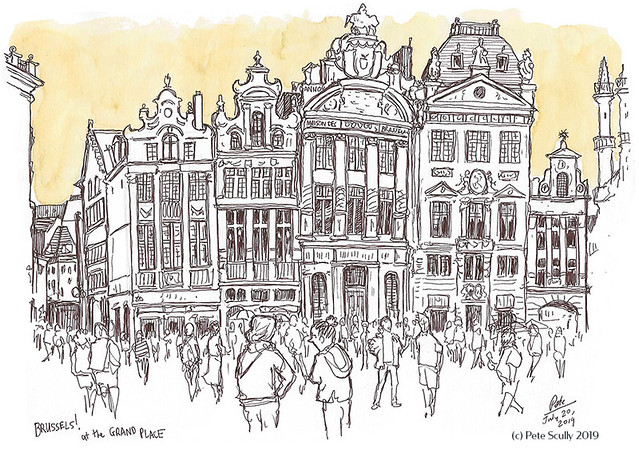 It has been a dream of mine to sit and sketch the whole Grand Place in long panoramic form, to spend about three hours sat drawing all the details, but I think it may be a detailed panorama too far. It is so ornate, so mind-bogglingly overwhelming, I may need to carve out time on another trip. the main reason though is that I keep just wanting to wander off and eat frites, drink beer, explore. This is Brussels, where exactly twenty years ago I would come and walk about exploring on the weekends when I wasn’t in Charleroi. This wasn’t my first trip back since then – maybe my third? – but certainly my first time back in Brussels in over a decade. Brussels is still Brussels, maybe a few more beer-crawl weekenders dressed in matching silly costumes, but the busy wide Boulevard Anspach that cuts through the heart of the city is now pedestrianized, which was a big shock to the system. It took me a few minutes to remember where all the winding roads lead, it’s easy to get lost in Brussels, but finding my way to the tall spires of the Grand Place is easy, and from there, Brussels is my oyster, or perhaps my mussel. 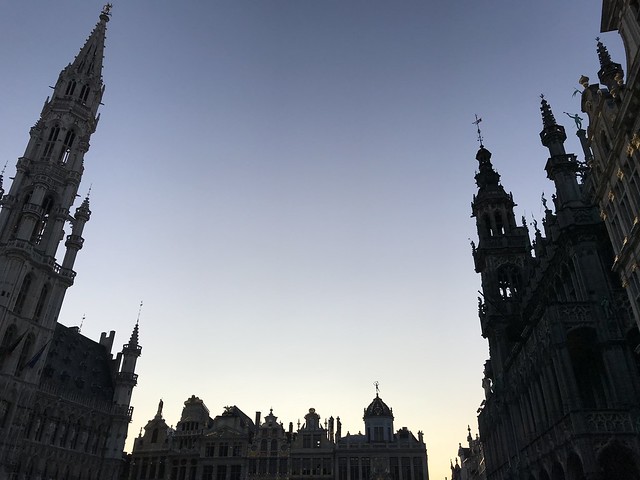 It was evening by the time my Thalys rolled into town, and rather than jump on the metro I foolishly decided to walk from Midi to downtown, a walk I used to know well. This time there was a huge funfair in the way, and I was thrown off by how the exits look different now; I have never really liked Bruxelles Midi station much (known in Flemish as Brussel Zuid), and I’d get to spend even more time there later in the trip, but I was so excited to be back in Brussels I didn’t care. My hotel was not far from Grand Place, and I had enough evening light left to do the sketch at the start of this post, which despite all the details was done really quickly. I then popped into the old fast-fooderie Quick, which wasn’t as good as I remember, and sauntered up the Rue Montagne aux Herbes Potageres to one of my favourite cafes in the world – A La Mort Subite. 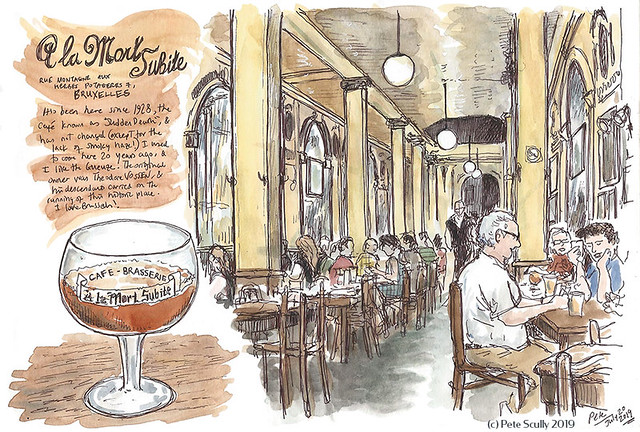 “Sudden Death”, that’s what it means. You may have heard of the beer, especially their slightly sweet gueuze or their very cherry kriek.I was so excited to find my old favourite seat, right by the door and the window, was open for me to sit and sketch when I got there. I used to sit in that seat when I would come here 20 years ago, Saturday afternoon, frosty or wet outside. I remember coming here to meet another English teacher in Belgium, Barry, and playing chess on a little wooden set I bought at Grasshopper, a toy shop nearby, which I still have. I remember coming here in 2008 with my mate Roshan and sitting in the same spot, remembering times when I had come back before and remembered other times. Some people drink to forget, I drink to remember. I had the gueuze of course, followed by a Ciney, and sketched the old interior. When I first came here, people still smoked inside bars and so there was a foggy air which yellowed the walls. These days the air is so much nicer. The cafe was opened in 1928  by Theophile Vossen, and 91 years later the Vossen family still run this cafe. I remember when it was only 71 years old. I am so happy to finally come back and sketch this old place again. 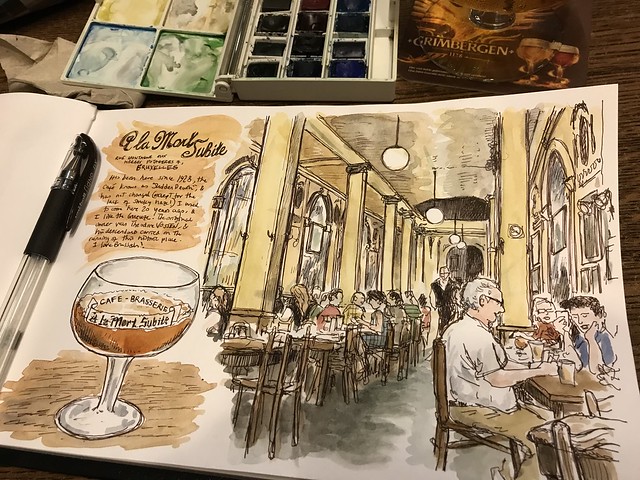 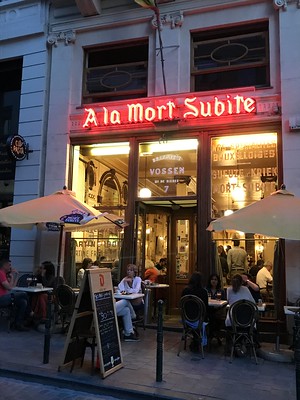 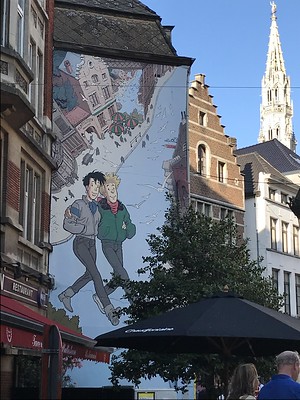 I walked about the streets on the way back to the hotel, tracking the changes that two decades had brought. I came across another place which was significantly less old than A La Mort Subite but where I used to go quite a lot back in 1999, the Irish bar Celtica. I popped in to see if that had changed over the years, and passing the security staff throwing out an extremely drunken sod on the way in, indeed it had not. Live music was being played by Father Jack from Father Ted, and it was full of people young and old, locals and others, it really wasn’t any different. It brought back more memories – this place, as with many others, tended to never close during the night, so you could go there on a Saturday night and leave in the early daylight hours, it would still be packed. Celtica was a useful place to hang out and wait for the first Sunday morning train back to Charleroi on a night out in the capital. I remember arriving in Brussels once or twice by Eurolines coach, at the Nord station, and getting in too late for the train home, so I would come here, sometimes with all my bags (one time I was bringing my guitar), chat to people (I remember meeting staff from NATO once, I asked them if they could let me know where was being bombed the summer after because I was making travel plans; it was 1999), drink very slowly, listen to an old soak bellowing out Whiskey In The Jar on the little stage. I didn’t stay long this time, I was getting jet-lagged (I had arrived on a first-class flight from LA that morning in Paris; 1999 me would probably not believe that, 2019 me barely does), so I walked back to my comfy hotel bed, and I was up early and refreshed for a nice morning run around empty streets the next day before leaving to go to Ghent and then Liege, a whistle-stop tour of my favourite small country.