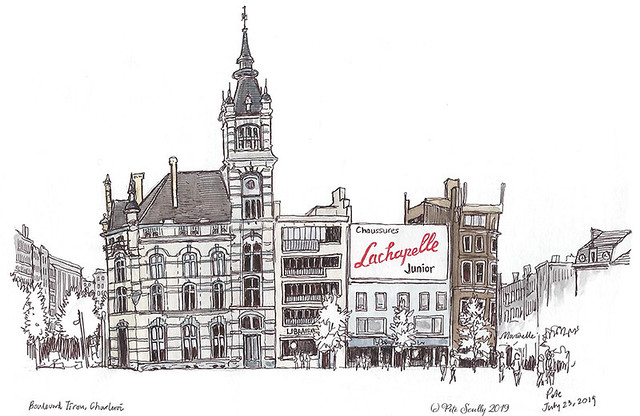 Checking into the Ibis hotel in Charleroi, the desk clerk looked at my California ID and widened his eyes. “You’ve come from California…to Charleroi?” he asked in French. He was genuinely surprised. Charleroi is not exactly a tourist destination. People come to Belgium to visit Bruges, or Antwerp, they don’t come to visit Charleroi. People from Belgium don’t even come to visit Charleroi. In fact most of the day before catching my train to Charleroi had been spent in Liege, where my companions would say to each other, “Hey do you know where he is going later? Charleroi!” “Vraiment? Ho ho ho!” they chuckled. My French-speaking Belgian friends told me they even had difficulty understanding anything in the Charleroi accent, which probably explains why my own French is hard to understand, because I learned it there (also I’m not very good at it. That said, people in Charleroi did complement me on my good French this time, so they understood me fine). Someone else told me, “Charleroi is the worst city in Belgium,” with a finality that said these truths were self-evident. I had spent a year there between 1999 and 2000 and I knew this was how Charleroi was often seen by some other Belgians, but I think I had forgotten, or assumed that was a thing of the past; maybe not. I was coming to spend a couple of nights here, to explore and draw, to see what has changed in two decades.

The shiny statue of Spirou outside the station was new. Oh, I should point out that Charleroi, as the ‘BD’ capital of Belgium (BD = ‘bande dessinee’, comic books), has many statues of its great characters all over town, like real-life local heroes. Charleroi is all about the comics. Worst city in Belgium? More like best city in Belgium. After checking in, there was still a bit of time before the sun went down to explore. The city has really changed – the whole are around the ville-basse has been completely renovated. Whole buildings pulled down, shiny new ones gone up. The small cinema on the Place Emile Buisset, ‘Cinema Paradiso’, where I remember watching the Blair Witch Project on a quiet Sunday night back in 1999, is gone, replaced with newer buildings, including a large BD comics shop. I walked past the old seedy part of town, still a little seedy but the ‘madames dans les vitrines’ are gone. Ladies in windows were quite common twenty years ago, but I didn’t see any this time. The big old casino was there but closed, and there used to be a shabby looking building on a corner that I recall was a very scary looking nightclub, I never went into – now gone. There’s still an air of seediness here, and while much has been scrubbed up, many places are just boarded up and empty. There are a few of the old cafes, with the same aging people just sat around, the places that never seemed to close. Just not as many as before.

And then there is the new mall, and the massively upgraded plaza at Boulevard Tirou. I did sketch the shiny new open space looking out towards the beautiful tower of the Librairie Moliere (though I sketched it on the next day), which is at the top of this post. When I lived here there was another building in front of this, which had a few shops in it, and was a kind of market place. The rest of the square was a car park. It really is much nicer now. I knew it would be different – last year I was looking at Charleroi on Google Maps, thinking ahead to my visit, but some of the pictures were showing the new look, while a few others had not yet been updated. So here are a couple of screenshots I took:

Well done Charleroi, well done. The massive shiny new mall, which I didn’t go into on that first evening (it closes promptly at 7pm), has really helped make this formerly tired part of town into somewhere far more attractive. But this isn’t the part of town I used to live, I lived way uphill in the ville-haute. I wanted to go there, I wanted to go home. The walk up there depressed me. Rue de la Montagne, which was full of shops twenty years ago, is now full of empty closed down shops. Obviously the mall has moved the shopping away from here, but it was saddening – I liked walking down this street years ago, going into Blokker, and the little music shop, and the sports shop where of course I met the one and only Kevin Keegan, who was England manager at the time. I’ll never forget, I just walked in to take a look at the football shirts, and there was King Kev, doing keepy-uppies while a camera crew looked on. “Wow you’re Kevin Keegan!” I said, and we had a little chat. This was in the run up to Euro 2000. He was nice, and signed my diary. He asked me about Charleroi, I might have given an honest assessment, but told him that the people are warm, coal miners who like their football team in black and white stripes. A month or so later in England my neighbours told me they had seen me on TV talking to Keegan, which was a surprise. I thought of that, as I walked up this sad street. My old bank was closed, the old laundromat too,  the place where I would get my tuna paninis was gone, the night-shop where I would get my 1am fix of Fanta Citron was also gone. I went all the way up to La Vigie, the enormous tower I lived in, at Square Hiernaux. Little had changed up there, but the area felt more worn down than even when I was there. It might have been the time of evening, but the Place Charles II, which felt very much like the beating heart of town in 1999, was looking rough, with grass starting to poke through some of the tiles where the fountains used to spray. A drunk woman approached me, telling me that the grass was good Walloon grass that must be protected. I wasn’t going to pull any up. I wandered into the neon mess of Place du Manege, which was slightly less neon but still a bit of a mess. And I have no idea what this three-legged frite lady was supposed to be, but Dopey the Dwarf was well impressed. Something about this just says ‘Charleroi’ to me.

Chez Raoul, the old friterie and kebab shop I used to eat at so often that the Turkish staff there took a photo with me when I left, is now no longer a friterie but a shisha cafe. Some old places were still there, such as El Gringo, as uninviting as ever, but I was looking for my favourite bar in the whole world, La Cuve A Biere. Apart from the fact there was hardly anyone there, I am pleased to report that it hasn’t changed one bit in twenty years. Years ago I would go there when it was cold outside, as it was my local, and my glasses would steam up. I would take them off to wipe them clean, and by the time I got to the bar and put them back on, my beer was already waiting for me. I loved that place. I would go there most nights, to sit and write, or read, or chat with locals, or watch football. I wasn’t sketching bars back then, and I have always wanted to come back to draw here. Unfortunately, that will need to wait for another trip, because they closed early. I was the only one in there. However I did order my favourite Belgian beer, the epic Charles Quint, served in a special ceramic mug and introduced to me in that very bar by a huge sailor from Antwerp twenty years before, and they still serve it with a little bowl of cheese. The best. 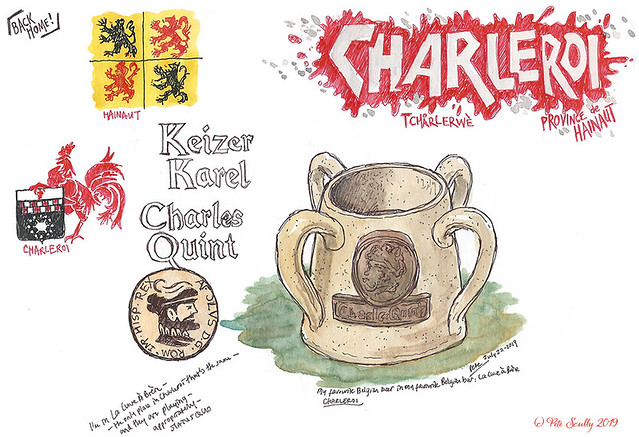 While I didn’t get to draw the interior this time (perhaps I should come back on a cold Saturday evening in winter time), I did come back next day to draw the outside from the corner opposite: 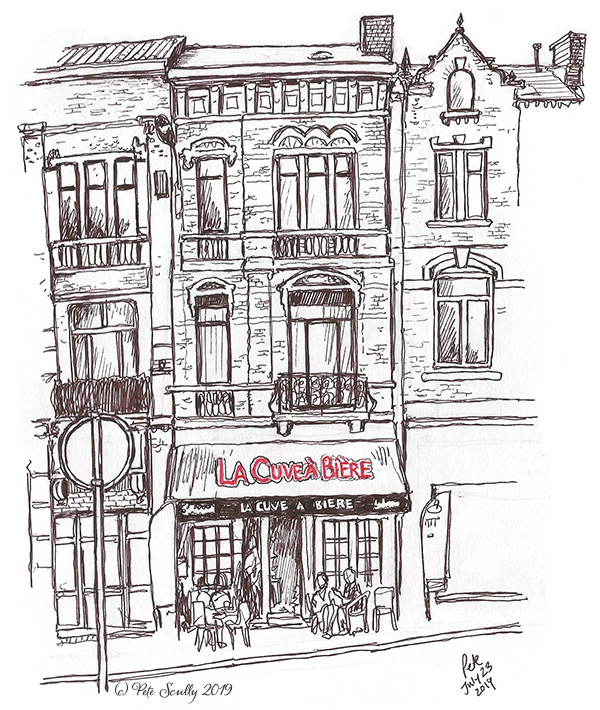 I left, and walked through this less salubrious part of town in the same shoulders-up suspicious-of-every-shadow way I did way back when. It felt more dangerous now, with people lurking in doorways and outside seedy looking tavernes, but that might be the doubling of my age, and my Californian years making me feel less invincible than when I had arrived from Burnt Oak at the end of the 90s. I walked past the corner where the phone-box used to be, which was once my only way to call England, the spot where I learned the news my nephew Leo was born; he is now taller than me. I walked past a square which I remember as a car park but is now some sort of city-centre beach. I walked down a street where I remember tripping over a huge rat one night; it was dark, the streetlights weren’t working, but the rat didn’t care about me and just plodded slowly off. Beyond where the bare outlines of factories that circle Charleroi, and I remembered the smell of sulphur as they would pump fumes into the night sky, but I guess they have closed down now. There was one place left on this evening of rediscovery. I was hungry, and there is only one place to go when it is midnight when you are hungry (or at 3am, as was the case when I was 23), and that is Robert La Frite. Robert is a little hut a little away from most of the action (action?!) but it’s worth it, these are the best frites around. There is always a line, and even on a Monday night after 12am the place was very busy, and not with the usual late night drinker types, people were out with their kids, pickin’ up their frites. Even writing about this I get hungry for them. I did not eat healthily when I was in Belgium, living off frites, battered turkey kebabs, beer and chocolate, but as I said when I was 23 I was invincible. You don’t go to Belgium for healthy food, you go there for great food. And like most Belgians, I like my frites drowned in sauce. My personal favourite is Sauce Andalouse, a little spicy, utterly delicious.

And then back to the hotel. I was looking forward to my big day of sketching and exploration, little did I know the heatwave was about to hit big time. I had come from California to Charleroi to escape the heat, but ended up in one of the hottest weeks Europe had seen in many years…

One thought on ““you’ve come from california…to charleroi?””