Right, part two of the Premier League kit round up, and without further ado, let’s get going… 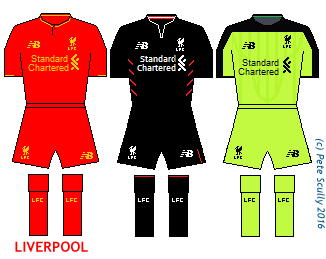 When I was a kid Liverpool were pretty much the best team in the world. Not to me of course, I supported the even greater Spurs, but that Liverpool team of Rush, Dalglish, Hansen, then Beardsley, Barnes, Aldridge, the Grobelaar years basically, they were spellbindingly good. They are less so these days, no league titles since 1990 (yeah, more than Spurs) but with Klopp at the helm, maybe they can claw it back into the top four again. They opened with a 4-3 win at Arsenal which sounds good, but 4-3 games don’t mean championship form. Their kit is pretty slick and basic, gold trim, nothing fancy. The away kit has a few little flashes here and there, but the third kit is an odd lime green of the sort that these days, we look at and say, whatever. If it isn’t a broccoli kit or a ham kit or a human interior anatomy kit I’m not even interested. Prediction? Fifth or sixth I suppose. 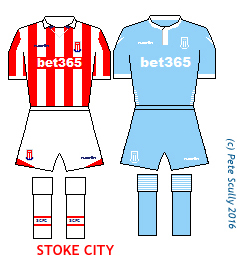 “But could he do it on a rainy Tuesday night in Stoke?” Is the oft-mentioned cliche when speaking of fancy foreign football fops frolicking about the field. Hardly anyone ever says it about the man who washes cars and waters gardens mid-week in the evenings in Stoke. Stoke were the team of Stanley Matthews (them and Blackpool), one of the greatest ever footballers ever to come out of England. But enough reminiscing about the wizard of dribble; stoke’s kits are made by Macron this year and are smart, quite nice, bit boring perhaps that is ok. How will Stoke do this year? Well if they can do it on rainy Tuesday nights in other places than Stoke they will stay up. Next… 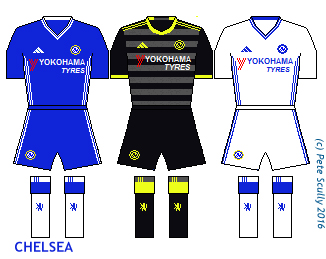 Well well well, Chelsea, fancy seeing you down here rubbing shoulders with the common folk, the Stokes and the Watfords. Weren’t you reigning champions a year ago? Mourinho got sacked, your rich guy players farted around, and then you celebrated a 2-2 draw with Spurs like you had won the league again. Well with a top new manager in Conte they might find their form again, but I can’t see them getting back to top spot so quickly. The kits are nice though, I’ll say that. Even the second one. Prediction? Fourth. I dunno. 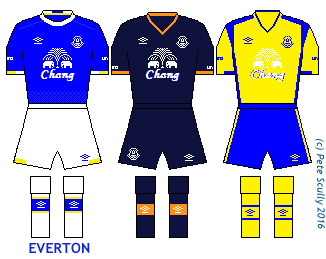 Ronald Koeman is now the manager of the Toffeemen. I loved him when he scored that rocket for Barcelona in the 1992 European Cup final against Sampdoria (I liked both those teams). I hated him when he helped knock England out of the World Cup qualifiers in 1993. I hope he does well at Everton. They will finish mid-table again. I don’t know, 8th. The kits are nice, home kit is simple, Umbro doing a decent job, though the sponsor having a picture of two elephants standing under a fountain, what is that supposed to be exactly? Maybe it’s fireworks? Two elephants playing with fireworks. Or is it spaghetti, and explosion of spaghetti? I don’t know. The second kit is nice, dark. I like the third kit, yellow. Hard to muster up much enthusiasm for these though when you have two elephants standing under a massive exploding spaghetti fountain. 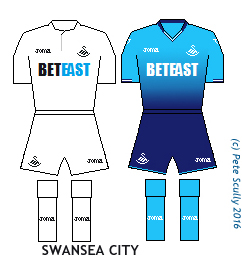 Swansea have done away with flashy Adidas detailing and switched to the classy Joma for 16-17, going for a pure clean white look. The sponsor has a dash of blue which then turns into the away kit, a gradient affair that has an overall calming effect on anyone who sees it, like a peaceful lake or a waterfall. this is scientifically proven to reduce instances of hooliganism in football grounds, so effectively they are bringing a message of peace over from the southern Welsh coast. they will need a third kit. how about an angry fiery red? Fun fact. Swans, did you know they are all owned by the Queen, swans? Where will Swansea finish this year? I don’t know. 11th maybe. 200th. I don’t know. They’ll be fine, they’ll stay up. 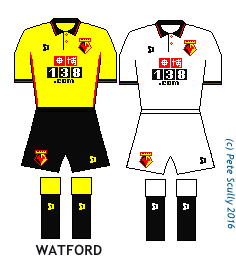 How are Watford still in the Premier League? Well midtable last time so I suppose they weren’t too bad. I just thought they would go down. Oh right, Villa, Norwich and Newcastle were completely pants. This year the Hornets have ditched Puma for ‘Dryworld’. Dryworld? Who the bloody hell are they? The kits are fairly ho-hum, none of the buzzing horizontal stripes from last year, and why does the away kit have black socks in an all white kit when the home kit has black socks? Answer me that Dryworld, whoever the hell you are. Where will Watford finish? I think this year they go down. Sorry Watford fans. You’re still better than Luton. 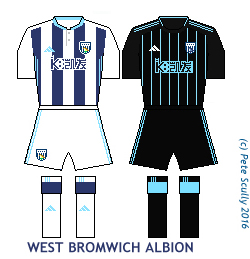 “West Brom” or “WBA”? Nobody calls them “WBA” any more. Well I don’t think so anyway. For all I know they do it all the time, I don’t know, I don’t live in England. West Brom, the great survivors. How do they stay up every year when it looks like they should just go down? I think it’s Horcruxes. I think that is their secret. I think Saido Berhaino found out and that is why they won’t let him leave. I do like their kit this year, one of the nicest. The light blue trim makes a nice addition and goes well with the Baggies blue. The away shirt is black with pinstripes. It looks nice. West Brom will stay up again. They will not win the league like Leicester did. Unless they use the Imperiatus curse of course.

Ok that was the middle, stay tuned for the bottom six.