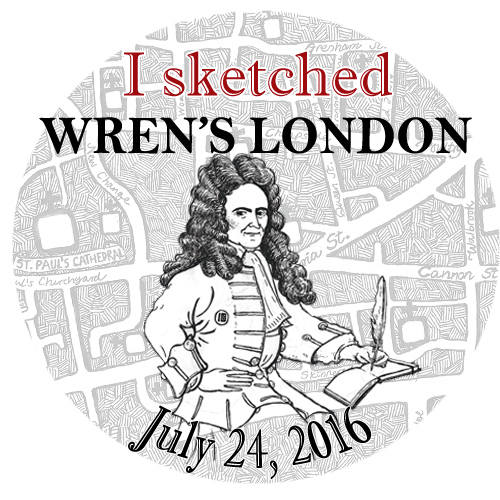 On Sunday July 24, a lot of us gathered outside St.Paul’s, and then dispersed and sketched Christopher Wren’s London. It’s the second time I have run a Wren-themed sketchcrawl, and the fourth themed ‘crawl I have hosted in London since 2012. I’m already thinking of themes for next year! As in the past, I created special handouts which included a hand-drawn map showing all of the Wren churches (and other buildings) within the City boundaries. There are a couple of Wren’s City churches not showing, only because I didn’t stretch the map far enough north, and of course it shows none that are outside the Square Mile; perhaps we’ll sketch all of those next time! Here is the map:

We started at 10:30am outside St. Paul’s, and I gave a little historical introduction (see this photo by James Hobbs!) talking about London leading up to 1666, starting with the beheading of Charles I, which many English people believed had brought a curse upon them, manifesting in the year of the beast, 1666. That was the year of the Great Fire of London; I won’t tell the whole story here, you had to be there. We were joined by a good number of people from around the world who were in England for the Symposium, including my Portland sketcher friend Kalina Wilson (Geminica). I met a lot of great new people that day too, as well as old friends. It was very international – in addition to the UK and the US, we had sketchers from Singapore, Hong Kong, Italy, France, Pakistan, Luxembourg, China, This was day two of London’s Urban Sketching pre-Symposium, and it was a little cooler, and a lot calmer than the previous day in Trafalgar Square. I do like the City on a weekend. 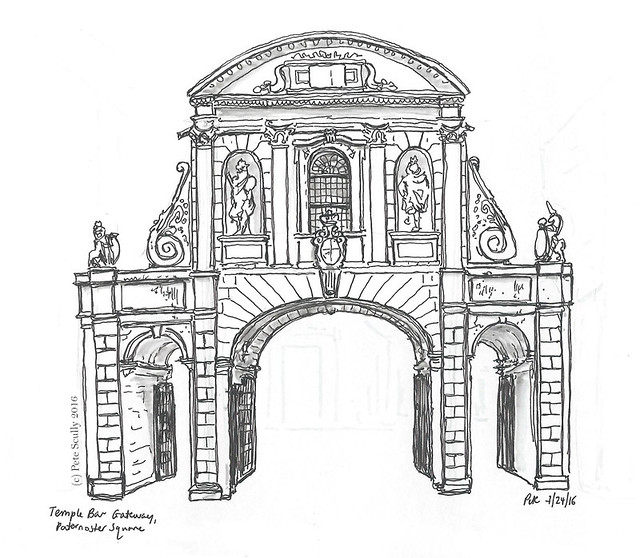 In 2014, I sketched seven Wren buildings in one day, and my ambition was to sketch more. However, you sketch what you can sketch, and I’m pleased to say I at least matched my previous haul. I did use more pencil while sketching than usual, something I am doing more. First off though I sketched the Temple Bar gateway in pen. This was originally down at Fleet Street at the entrance to the City but removed many decades ago, only to sit languishing in Theobolds Park near Cheshunt. It was restored and placed next to St. Paul’s just over a decade ago, forming the entrance to Paternoster Square. It was from that still-shining-new plaza that I sketched St. Paul’s itself. I have always struggled with the great domed cathedral from this angle but that’s ok, you have to draw St. Paul’s. 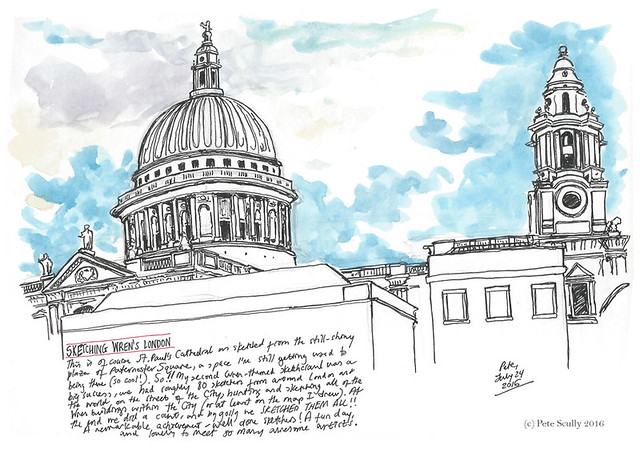 Next up, a couple of neighbours to St. Paul’s. First of all, St. Augustine’s Watling Street, largely destroyed in the Blitz. I sketched this in pencil from the gardens of St. Paul’s churchyard while talking to my old friend from high school, Joan Uloth (check out her Instagram) and Beliza Mendes from Luxembourg. I really want to sketch Luxembourg, I met more Luxembourg sketchers in Manchester. 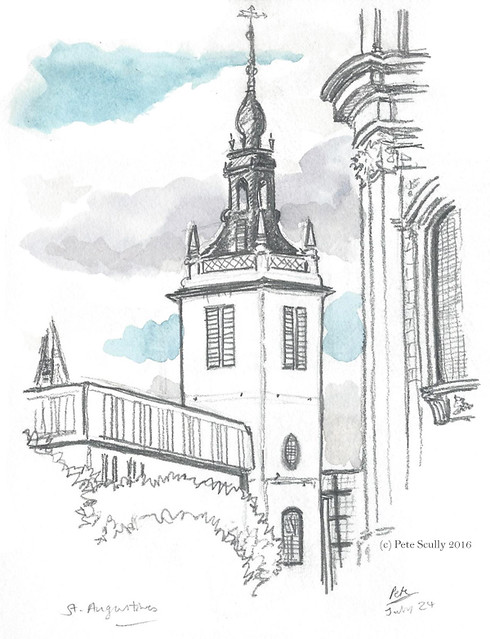 Then I sketched St. Nicholas Cole Abbey, which is visible across the street (now that the building that was in the way has been demolished, that is). 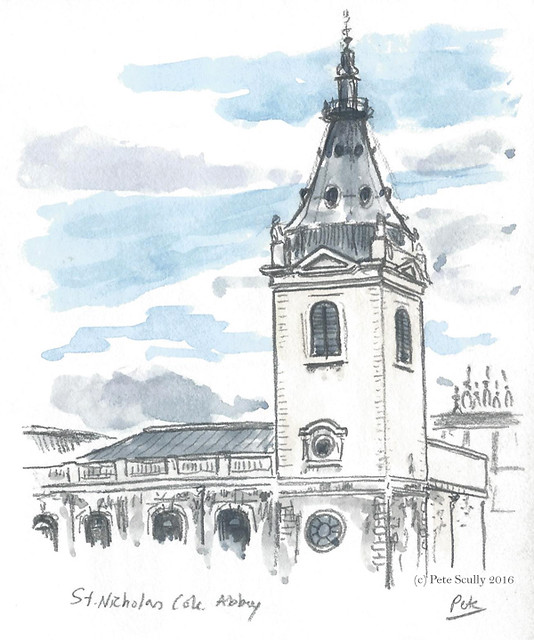 This one was sketched across a busy street, St. Benet’s Paul’s Wharf, the church where they hold the sermons in Welsh. 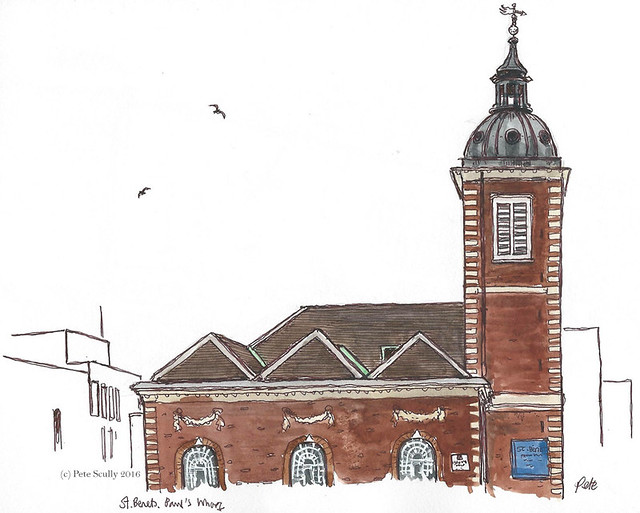 Ok this next one was sketched from an angle and with the very loud and quite chaotic bells ringing. St. James Garlickhythe (haunted by “Jimmy Garlick” who sounds like an old washed up musician from the early 70s). I did the old paint splatter thing because the great Tia Boon Sim from Singapore was on the sketchcrawl and I’ve always been inspired by her paint-splatter styles. It seemed appropriate given the noise of the bells! 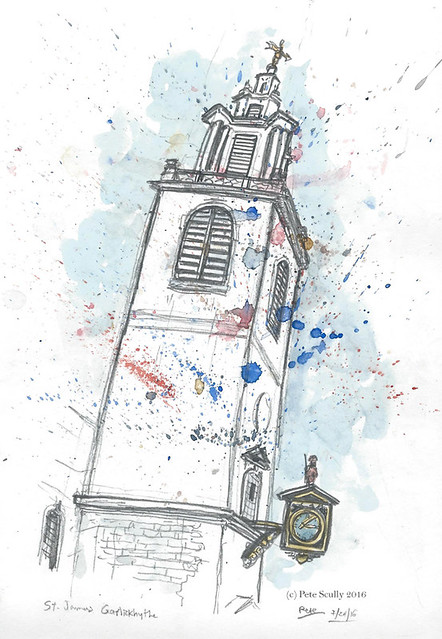 My final sketch was of the neighbour to St. James, which is St. Michael Paternoster Royal. What I loved about this crawl was that wherever I went there would always be at least one or two other sketchers there busy plugging away. This by the way is the church where legendary (but historically very real) Mayor Dick Whittington (he of the cat and the pantomime) was buried. Nobody knows where his grave is now though, but while Wren’s tomb says “Look Around You” I presume Whittington’s tomb says “Look Behind You”. 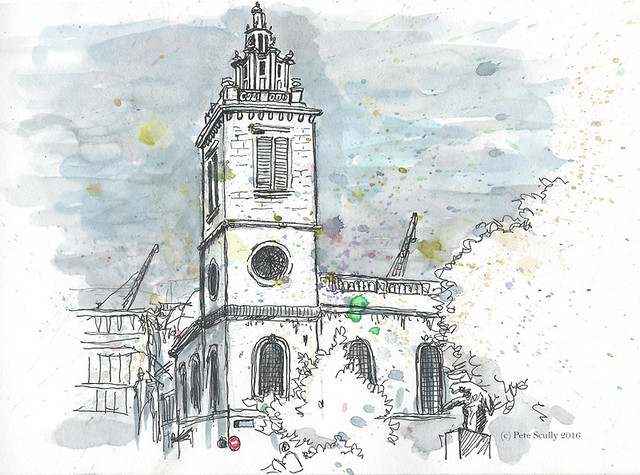 And then we met up at The Monument, to look at each other’s sketchbooks. Of all the people that made it to the finish (and quite a few did not; I checked the number of maps given out and I think we had around 80 participants total), we got together and I read out the names of each Wren building, asking sketchers to raise hands if they had sketched it.

You’ll never guess – we sketched ALL OF THEM. Every single one! Great job, London sketchers!!!

Here are a few photos from the end. You can see more at Urban Sketchers London (JAmes Hobbs has posted a nice set “In Wren’s Footsteps“) and on this Flickr set “Sketching Wren’s London“.

Afterwards several of us went to a pub near Borough Market for a post-sketchcrawl-pint. I sketched two sketchers, Rachel and Jimmy… 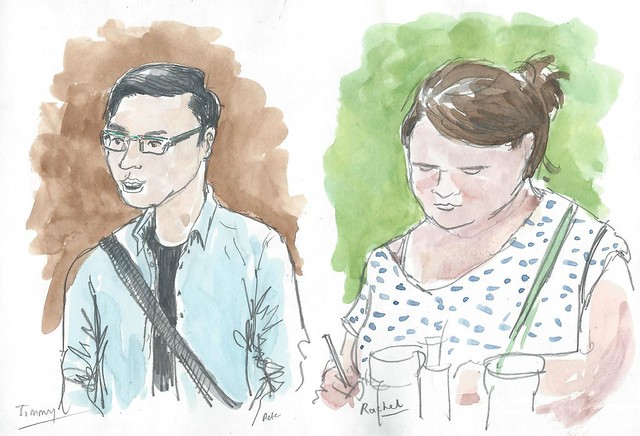 And here is the final group photo at the base of Wren’s Monument to the Great Fire! Can’t wait to sketch with Urban Sketchers London again in the near future. So nice to meet so many new sketching friends.

Oh, and everyone got a sticker!