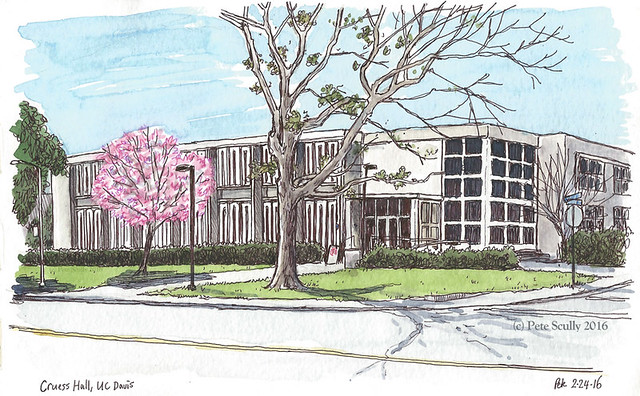 This is Cruess Hall, UC Davis. It’s the home of the UC Davis Design Department. I’ve given a couple of guest talks in classes here before to design students about keeping sketchbooks. I wanted to sketch it while the blossom was so pink; even now, a week or so later, it has already desaturated. By that I mean it is still pink, but less so, it has lost some of its saturation. That reminds me of a joke, “What do you call a grey parrot? Polyunsaturated.” Actually that isn’t an old joke, I literally just made that one up a few moments ago. It does remind me of another joke, which goes “What is a polygon? A dead parrot.” Now that one is old, I read it in a joke book when I was 7 or 8 years old. I remember it now, I remember it was one of those “5001 jokes for kids” books. That book has had more influence over my life than any book ever, and yet that joke is the only one I remember now. I remember laughing so much when I read it, I was in hysterics. I couldn’t even tell the joke, it made me laugh so much. I stopped trying in the end, because I’m sure nobody else would have the same reaction as me, so the joke became my own, if I ever needed cheering up I was just ask myself, “what’s a polygon?” and laugh away for hours. Now I know that there is another very famous comedic episode about a ceased-to-be parrot, but I maintain to this day that the Python sketch is only the second funniest parrot-based piece of humour in existence (maybe the third now, if ‘Polyunsaturated’ ever takes off). Now I don’t want to give the impression that we Brits have some obsession with parrots expired or otherwise, we don’t go to school and take the pledge of allegiance to the dead-parrot-sketch (though we probably should). That said, a couple of years ago I dressed as a pirate for Halloween and went trick-or-treating with a parrot on my shoulder (well my son was trick-or-treating, not me, I just had to go with him). One person made a dead-parrot-sketch reference to me, and I pretended not to get it. So they explained it to me, they actually explained the dead-parrot-sketch to me, like, in full detail. As they said in Casablanca, “we’ll always have parrots.” (And that joke was taken from Red Dwarf).

So, this is Cruess Hall. It is also the home of the UC Davis Design Museum. Hey guess what, I will be having an exhibition of my sketchbooks there this Fall, tentatively scheduled from September to November. More details as they become settled, and I’m scheduled for a talk as well, but it will be fun. And hopefully 100% parrot free (except if anyone mentions polygons).

10 thoughts on “i love parrots in the springtime”