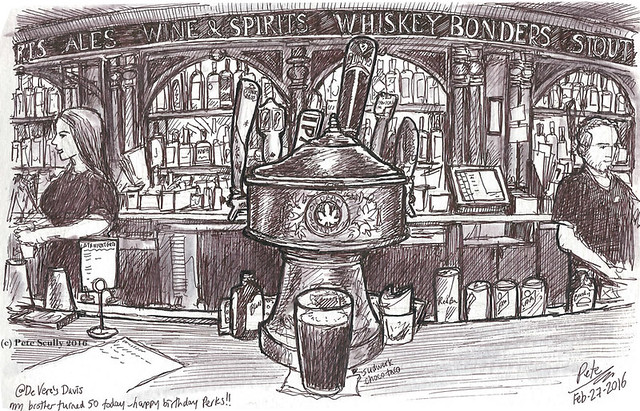 “Sudwerk Choco-Taco” is an actual beer that I actually had. It’s quite dark, darker than I usually like, but it was really nice, I would have it again. I like trying the different craft beers that we have out here, and in fact I’ve started recording the ones I have tried by using that ‘Untappd’ app on my iPod. Admittedly there are times when it can be hard to remember, so I make a point of writing them down, or in this case, drawing a picture of it. And of course, why draw the glass when you can draw the rest of the bar as well? This is another bar sketch of De Vere’s (I do one from time to time, last time was January 2015). I’ve been very busy lately, and so one Saturday night I went and watched Deadpool. By the way, Deadpool is awesome. Don’t take your kids!!!! It will make you laugh. After watching Deadpool, I popped by the Avid Reader to buy Star Wars Top Trumps cards, and then into De Vere’s to read Deadpool comics and do some bar-sketching. The bar-sketching thing sometimes comes down to me needing to sit somewhere and draw a complicated but structured scene. I used a brown-black uni-ball signo um-151 (“say my name!” I hear this pen yelling to me, “say my whole name!”) and also a light grey Tombow marker to mix it up a bit. There’s also some Pigma Graphic pen in there for the thick lines. I had a couple of other beers, a Smithwicks red, which was very nice, and the Aggie Dry Hop lager by Sudwerk, which is alright.

I was also celebrating, from 5000 miles away, my older brother’s birthday; he turned 50 on that day. This is a year for milestone birthdays. Wish I could have been there celebrating with him – happy birthday Perks!

I have some more bar sketches yet to post, ones from New York City. In the meantime if you’d like to see some more, this Flickr set “Pubs, Cafes etc” has loads of mine, from pubs around the world.