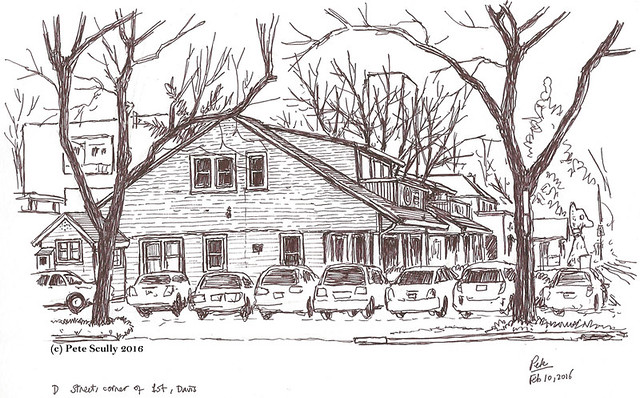 That’s a lot of cars. There are like, eight cars at least.This is the corner of 1st and D Streets (or the corner of “Free Speech” and “Design”) which is where you will find the fraternity/sorority houses of Theta Xi. Which probably explains all the cars, you know, “the taxi”. Look I’m 40 ok, I can make these jokes all day long. I was just getting away with it at 39 but at 40 I literally have a license for them. So Theta Xi is not the trainee-cab-drivers fraternity, though to be honest they have really missed out on a trick there. Like Kappa Chi Nu, the fraternity for future baristas at Starbucks, or Rho Rho Rho for the future professional canoeing instructors. That last one was a version of a similar joke told by Terry Pratchett, who is on my mind today because this day, March 12, is one year since he passed away. Damn, I loved Terry Pratchett. I grew up reading his books, absorbing his sideways worldview, I even used to draw characters from his books over all of my school notes, well Death mostly, ‘Mort’ being one of my favourite of his books. I even read the book in French (it is called ‘Mortimer’, and the title character ‘Morty’, since the name ‘Mort’ was taken by Death himself). I did have the German version too somewhere, ‘Gevatter Tod’, and I still have the graphic novel. At one point I tried making a comic adaptation in French myself but only got so far before shrugging my shoulders and giving up. I enjoyed the small-screen adaptations, the animated ones were a bit poorly made but the Sky TV shows were well chosen (Color of Magic maybe less so). I went to see one stage adaptation of Carpe Jugulum, which was actually staged before the book came out so that the um-actually crowd could not point out all minor deviations from the original (there were none anyway). It was at the beloved Riverside Studios in Hammersmith and Mr. Pratchett himself was there with his big black hat, along with a crowd of Granny Weatherwaxes, Deaths, Rincewinds and Cut-me-own-throat-Dibblers. I didn’t dress up, I didn’t do that sort of thing (though if I had, I’d have definitely been Vetinari). I remember one other thing from that night, I stood next to Stephen Fry in the toilets. He actually makes the Lord Melchett noise (“meeeeehhhhh”) while doing his business. Well no he doesn’t, but I imagined that he did. I definitely didn’t make it myself, at least thinking back I really hope I didn’t.

So, one year on, you are still much missed Mr Pratchett. I wish I hadn’t left all of my old Discworld books in England, because I don’t actually know where they are now.