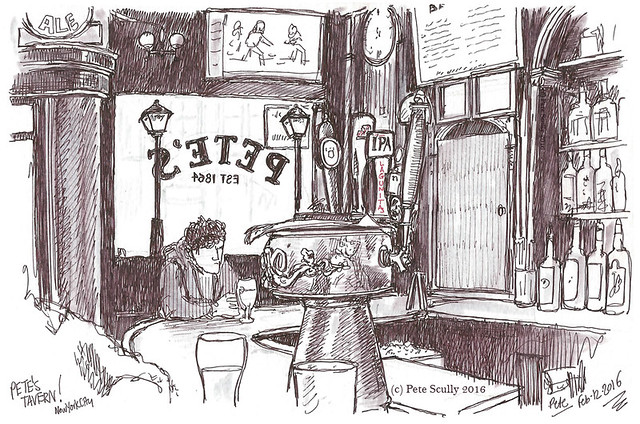 Thank you New York City, thank you. They named a bar after me! Pete’s Tavern, on East 18th Street. Ok fine, it’s not named after ‘me’, but without a doubt, you know this was the first bar I was going to hit in New York. Pete’s was established in 1984, sorry I mean 1864 (it is hard to read the writing backwards on the window) and is the oldest continually operating bar in New York City. I visited another oldest bar in New York City a couple of days later and I daresay there are more, but I loved it here. I actually came once before, in 2008, but I didn’t have time to sketch it then. This was my 40th birthday trip though and dammit I was sketching Pete’s. Now before i go on I must point out my favourite bar sketcher / pub artist in the world is Stephen Gardner, who has inspired me to sit in pubs with a sketchbook for several years now. He lives in New York and has done some amazing paintings and sketches of Pete’s Tavern over the years – check them out in this Facebook album. The. Master. Sadly he was out of town that weekend (as were a lot of people, long weekend and all) but I still sketched Pete’s while enjoying a few celebratory beers with my chums from London. Quite a few in fact, a fair few. A good old few. Fun times. 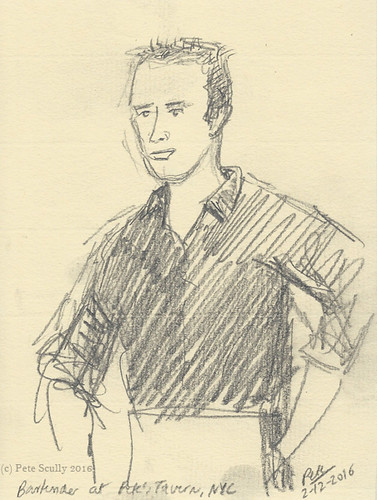 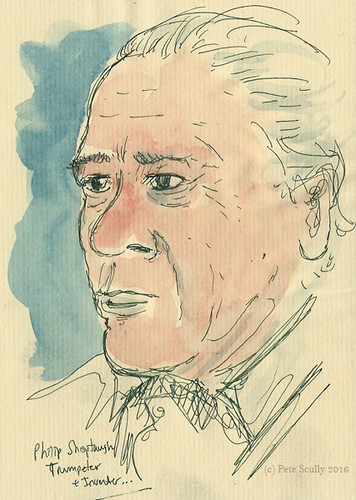 And we chatted with locals and other bar patrons. The bartender was celebrating his birthday too, though he is considerably younger than me (29 I think he said) and was a lovely bloke from Ireland. I sketched him quickly in pencil. I also sketched another nice fellow I was chatting with, a trumpeter in the San Francisco Symphony Orchestra called Philip, he was in town from Oakland (he was telling me his grandparents lived in Woodland, nearby Davis!), and his other job is actually an inventor of toys and games, especially mazes and labyrinths! Which was pretty much my dream job as a kid. And as an adult.

Yeah, Pete’s was fun. We came back on the last day before I flew back for a farewell pint, and on that day the snow piled down outside the windows. I may need to come back and sketch here again.