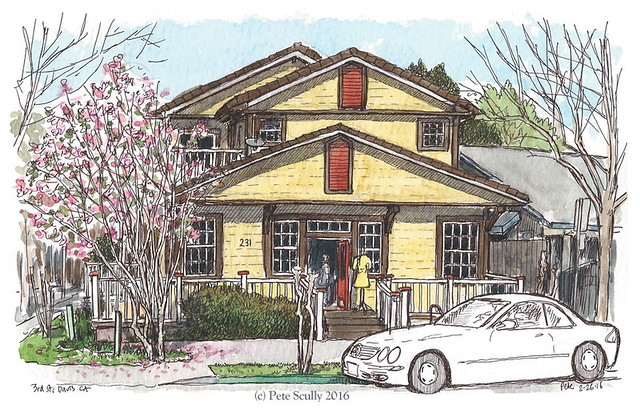 I don’t like posting sketches out of chronological order, but I was done with this one from yesterday lunchtime with the pink blossom blossoming and I wanted to show it to you now. Not out of an urgency to show spring in all its glory while it is still here, but to show you that we actually have spring in Davis in February because frankly, it’ll never stop being weird. Really though, I sketched this because the last time I drew this building (and I’ve drawn it a few times) it was painted white, with a greenish trim. Now it has a new paint job, is no longer the Davis Copy Shop, and I am guessing from the thing outside the door (what are they actually called?) that it is now some sort of clothes shop. This corner has changed; the two telegraph poles are now gone, as is the wire hanging overhead that was a repository for random pairs of shoes (legend has it that a group of geriatric shoe-makers lived her but I think that’s a load of old cobblers) (I’M 40 EVERYONE). I noticed that the shoes are now being thrown into nearby trees because you know, that makes sense. Ok so because I’m showing you the building as it looks now, you will also get the way it used to look. Cue sketch-history… 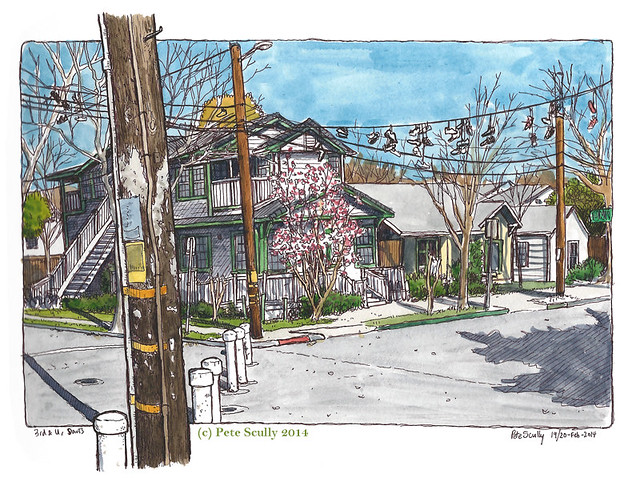 Two years ago in February 2014, the blossom is there, the shoes are there, telegraph poles, white paint with green trim. 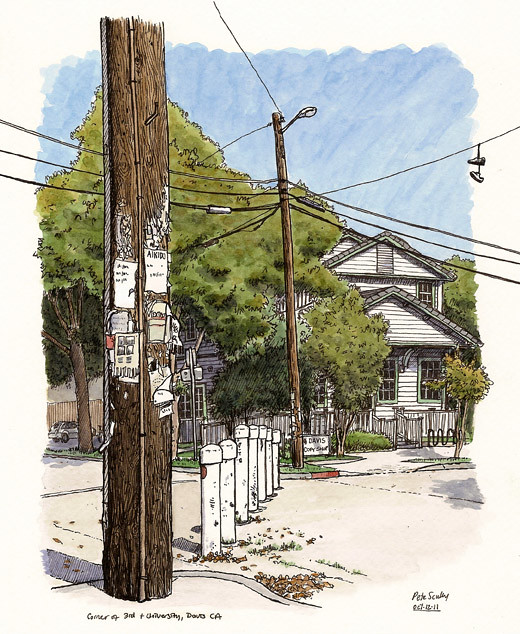 October 2011 (when it still felt like summer). No blossom. 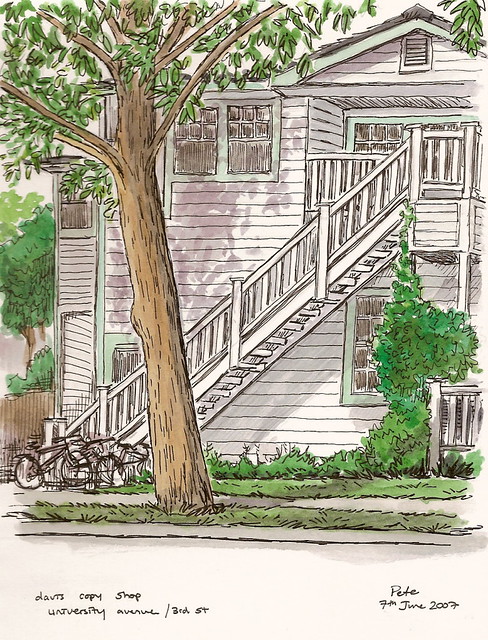 The first time I sketched this building, from the side, back in June 2007. Man I’ve been in Davis a long time… 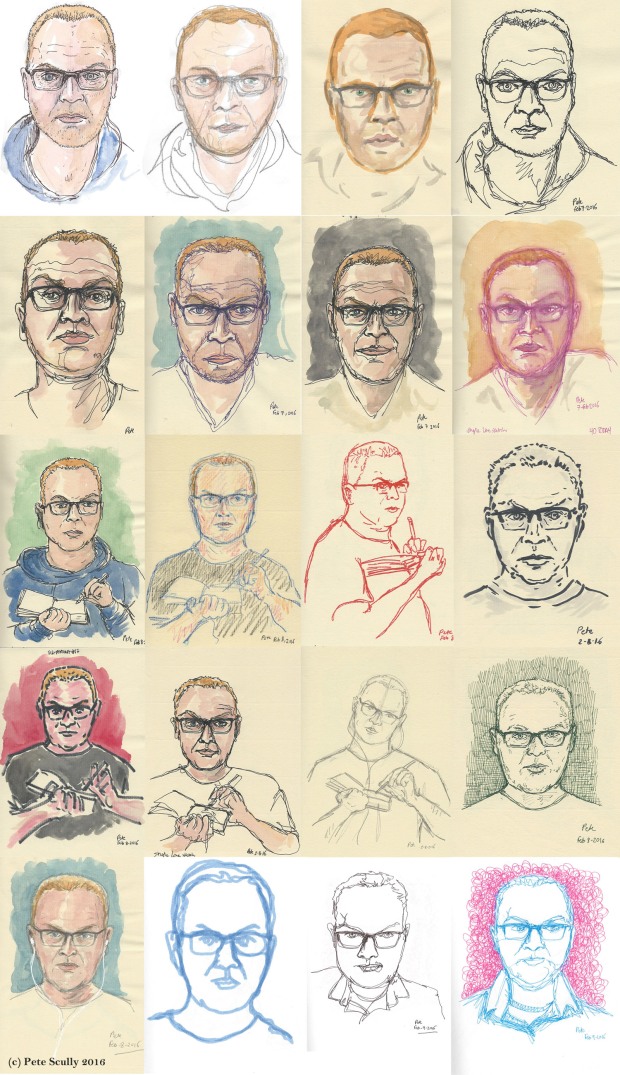 Hello there. What’s the meaning of this? I’ve been away from the blog for a few weeks, and in the meantime I have been doing a lot of writing, a lot of sketching, a lot of making evil eyes at my failing computer, oh and a little bit of aging. I turned 40 earlier this month (that’s “forty” as they would clarify on the football vidiprinter). So to celebrate, or whatever the word is, I decided that I would draw forty 5-minute-selfies. That’s forty “five-minute-selfies” not 45 minute selfies, as in 45 selfies that are really really small. Though I would do that. Perhaps when I turn 45. Forty by the way is not the new thirty. Unless there are ten years of my life that I can’t remember, it’s definitely still forty. It’s been a good forty years. I have spent just over ten of them in Davis. A couple were spent in French-speaking countries, and three on leafy Hornsey Lane. The rest were all in Burnt Oak, on the Edgware branch of the Northern Line. So, forty. I ate duck, had a cake very much like my favourite doughnut, and even watched some Super Bowl making every single possible variation of Superb Owl / Brilliant Pigeon / Amazing Falcon joke possible. By the way, I don’t care if I repeat jokes, ever. Now I am officially forty I can do this with some enjoyment. So next year, I think before the Superb Owl I will draw a whole series of different birds with varying qualifying adjectives of superbness. This is my ambition for age 41. So, forty. I went to New York; that was a surprise, I wasn’t expecting that. I will blog about that, because there are sketches of course, though not that many because it was the coldest ever. Like, honestly record cold conditions. And still I sketched, because I’m well ‘ard innit. So, forty selfies. Because I am working on a project involving five-minute people sketches (I’m drawing five tiny sketches of people) (actually I might do that) I figured that for turning forty (did I mention that?) I would draw, well you can see. So! Various different styles, all done very quickly, usually looking in the bathroom mirror (except for the odd obvious one looking at my iPad). And they are all of varying degrees of accuracy from “not much like me” to “pretty much like me”. By the way, the wrong thing to say when looking through an artist’s sketchbook full of quick rapid self-portraits, particularly an artist who primarily draws fire-hydrants, is “that doesn’t look like you, that doesn’t look like you, that doesn’t look like you, that doesn’t look like you…”.  Cheers! But I did keep it up. Self-portraits are weird – they quite often don’t look like you, because most people don’t see you in the same way you do when you look in the mirror. they see you from those different angles you cannot see, and the few times they have the mirror-view it is even then at a different angle from the one you see. When you sketch yourself, you aren’t sketching yourself in action, smiling, chatting, eating, relaxing, but always in staring mode. It’s odd. But I kept it up. Some are single-line sketches, some are in coloured pencil, some are with watercolour wash, some are with thick marker pens. I really like #29, #5 (unlike me physically but looks like me in a weird way), #9, #40, and a few others but here’s the thing. They all count. Even #11. They’re a bit painful to look at, and a bit scary to show. But they all count. When mixed together they pretty much all make up me. I think I learnt a lot from this, a lot about self-observation, a lot about what I can keep in or keep out.

So forty. Life begins at forty. It doesn’t, it begins like way before then, but we’re here now, so cheers folks. My brother, now he turns fifty this weekend. Happy birthday Perks!

More campus construction…this is the International Center, on the north end of campus, and it is almost ready. I have sketched it once before (in this post), but I have been cycling past this spot for years. By the way, click on the image to see it embiggened slightly. This was sketched in the watercolour Moleskine (#14 of those sketchbooks I have used). I like this view, as the perspective points us all the way to Russell. It was breezy, but the weather is getting pretty mild now. The last few days of my thirties are winding down. 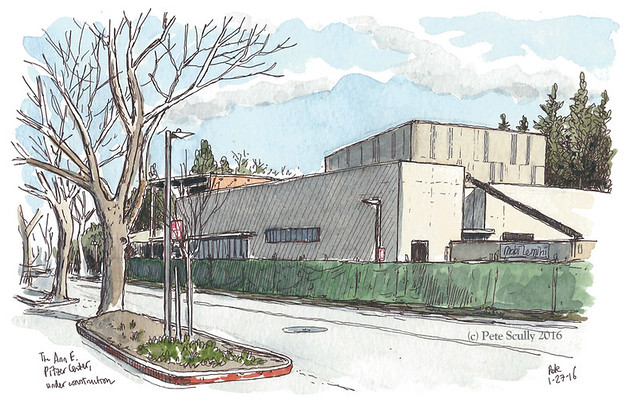 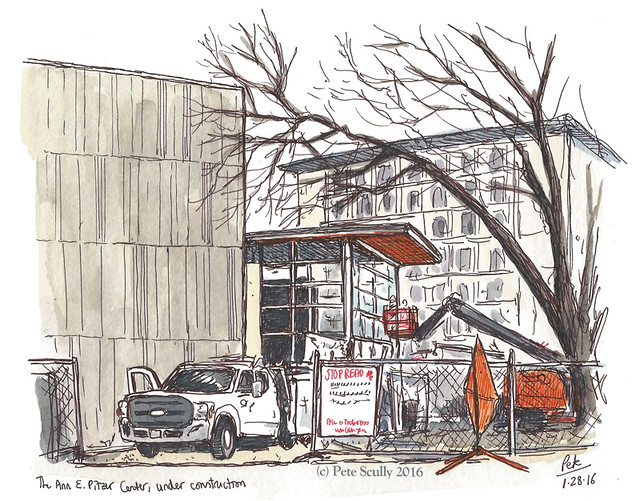 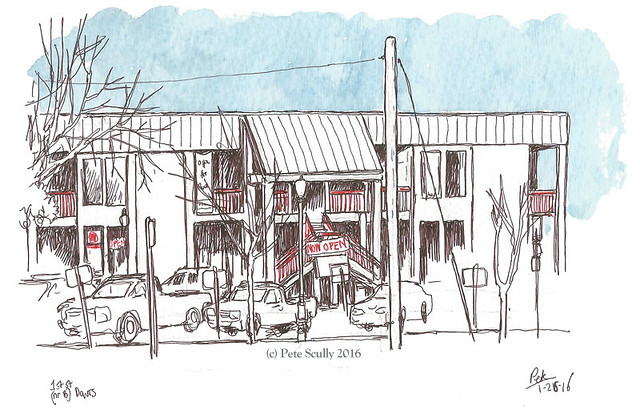 This is on the busy corner of 1st and B Streets, Davis, and I sketched as quickly as I could to give myself time to eat junk food and read comics. 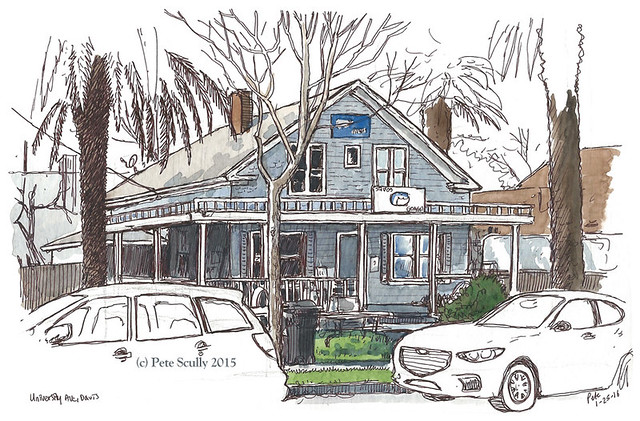 So I wasn’t sketching enough in 2016 (and I still am not, for my liking…been occupied) but I resolved to sketch every lunchtime this week. I made it four out of five which is very much back on track. This house is on University Avenue, just off of campus, and I just had to stop and sketch it. I don’t know if it’s related to sports clubs on campus but there is a big wooden sign referencing UC Davis rugby above the windows. This is a very typical style of house for the older streets of Davis. This is roughly on the other side of the block from the sketch of A Street I posted earlier this week.