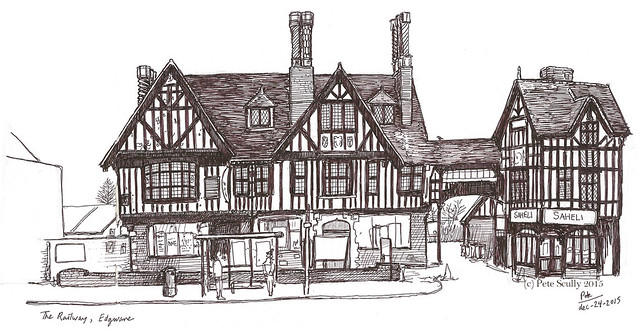 This is – or was – the Railway in Edgware, north London. For those of you unfamiliar with where Edgware is, look at the tube map, and look up at the top, it’s there at the end of the Northern Line. No, not that end, that’s High Barnet, the other end. There we are, just past Burnt Oak. I was born in Edgware Hospital (which is more Burnt Oak), and went to Edgware School, both my sisters have lived in Edgware at some point (one in an actual haunted flat), and it’s where we go when we go shopping in real shops, or at least used to. Edgware was that place which was a bit more upmarket than Burnt Oak, I always looked up to it. Again, that was the tube map, you had to look up to see it. I used to walk to school, down Deansbrook, through the alley into Fairfield, through the other back alley into Station Road, right next to this building here, the Railway. It looked like something from the Middle Ages (it was built in 1936 in neo-Tudor style, I was clearly a history idiot) (I wasn’t by the way, I was actually really good at history) (and I never ever thought this was medieval, and would have probably laughed at anyone who said it looked like it) (I wasn’t very good at history A-level though, it was all ‘the nazis’ and ‘the 1848 revolution’ and that sort of thing, I struggled with the reading, actually I know for a fact my Edgware School history teachers thought I was a ‘history idiot’ and they pointed it out) (in the end I got a Masters degree from King’s in Medieval English and you can’t do that if you’re a history idiot). So, this is a neo-Tudor building. “Neo-Tudor?” Sounds like a Stuart-era political thug. I read this description of this building somewhere but I think it’s more mock-Tudor. (History idiot) So…this is a Mock Tudor building, and was once a great pub called the Railway Tavern. No wait, it was the Railway Hotel, not the Railway Tavern (that was up Hale Lane I think? History idiot). Let’s start again.

The Railway Hotel was built in 1936 and is not, I repeat not a Listed Building. My source of this information comes from random local people telling me that back home, and they are never wrong about such things. The side part of it apparently is Listed, but the main part isn’t. I don’t know if it was ever an actual Hotel, and the Railway it refers to is really just the Tube line – back in the 30s Edgware was this glamourous place referred to as ‘Metro-land’, the new world opened up by the expansion of the London Underground. Big buildings such as this were built in the Mock-Tudor style in these burgeoning and now-connected suburbs almost as if to emphasize the ‘rural’ appeal of these now less than rural areas. Edgware itself goes back centuries (Middle Ages! Yes!) and is on the historic and vital Roman Road of Watling Street (actually called Edgware Road from here to central London; you’ve seen Edgware Road on the tube map, it is miles away). There are some genuinely historic buildings here, one around the corner being an old tavern that the famed highwayman Dick Turpin is rumoured to have stayed at. Right across the street from the Railway is St.Margaret’s Church, whose tower dates from the 15th century, with the building dating from the 18th century. And while it’s not particularly historic, George Michael’s dad used to own a restaurant a few doors down from here called Mr. Jack’s. The Railway Tavern may not be so old, but it is beloved locally. I remember the pub being a nice, warm place, friendlier than many other more raucous pubs nearby, with a lovely carvery restaurant upstairs. I remember going to that restaurant for my friend Terry’s 18th birthday, all those years ago. Some nice memories here.

I don’t remember when it actually closed. Was it before I left for America or after? I remember writing a blog post in 2006 on my first trip back from the States lamenting the passing of two of my favourite spots in Edgware, Music Stop the guitar shop and Loppylugs the record shop. I was sad that Edgware was changing so much, and it struck a chord, because somehow people from all over the world – well, from Edgware but living all over the world – were commenting with their memories of Edgware, of the school, of the old cinema and the record shops, that general old nostalgia thing we all do when we get online. You’ve seen it, the old nostalgia thing, you know what I’m talking about, “Like if you had one of these space hoppers”, “retweet if you remember what a flake in an ice cream is”, “share if you remember Daz Ultra” that sort of thing. The Railway must have been still open, or I would have mentioned that as well.  It has been closed for some time now, with no chance of reopening. These days pubs close, and that is that. So many old pubs are falling by the wayside, not profitable in these modern times, once great centres of community (ah remember that, it was great when everyone was drunk, Retweet if you Like). Remember the Pub, the old Rub-a-Dub-Dub? All gawn now mate, all gawn and never comin’ back.

Who knows what will happen to the Railway. I’m sure someone does; I was old it would be knocked down to make way for a big block of flats. These statements are usually correct, but I’ve learned to proceed carefully (as they are often book-ended with statements like “too expensive for the locals, they’re going to give them free to all the asylum seekers,” a phrase I have actually heard said). The truth is that land is owned by someone, usually someone less concerned with building communities and more concerned with building profits. There was last year a pub in Kilburn, the Carlton Tavern, that was illegally demolished a week before it was due to be a listed building (knocked down with all the tenants’ possessions inside and against the orders of the council), because the landowners CLTX, a company based in Tel Aviv, wanted it out of the way. Well, didn’t Westminster Council only go and order CLTX to rebuild the Carlton Tavern brick by brick within the next 18 months! A victory for the old pubs, perhaps, but we’ll see if it happens. I intend to sketch the site some day, maybe on the next trip. I wonder if a hundred years ago the Edgware locals will probably have lamented the loss of all their lovely green space, demolished so that houses can be built, along with these ugly mock-Tudor pub buildings (“Mock-Tudor?” they would say, “Medieval more like!”). The world keeps on turning…

6 thoughts on “the end of the railway”