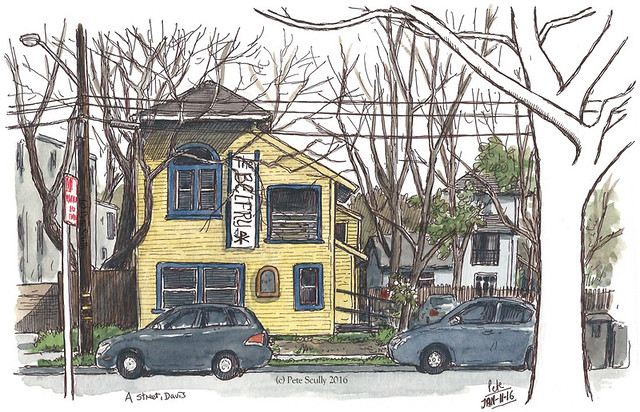 This was the first sketch of 2016. Seems like ages ago – I’ve just not done as much, two sketches since new year. Come on Pete, no excuse! This is unlike me. Partly, I’ve been uninspired – what do you sketch in the town where you’ve sketched everything – also it’s been colder, rainier, which is no excuse really because I like it like that. I’ve been busy, but I’m always busy in January. I was happy to get out this one lunchtime though, and sketch this building on A Street. That’s “A” Street, not “a street”, oh I’ve done that whole thing before. Still it would be nice if it was actually called “a street”, and then “bee street”, “sea street”, followed by “the street” “he street” and “f*@! street”, and then “gee! street”. After that Davis downtown kinda ends so that game gets a bit boring. Still it’s always fun when people ask me the way to “a street” and I say, “sure, which street do you want” and so on. That never happens. It’s also fun when I ask people “which street is this” and they say “A” and I say “I said, which street is this” and they say “A” and I’m like, “WHICH STREET IS THIS” etc. That never happens either. Ok, the sketch. The Belfry. I’m not sure they have an actual bell in there, maybe a doorbell, or it may be in the rear building, which actually does look more like a belfry, I suppose. Actually it is the meeting place for the Christian Lutheran Episcopal Fellowship, no hang on it’s the Lutheran Christian Episcopal Fellowship, or is it the Lutheran Episcopal Christian Fellowship, yes I think that is the one. It’s a hard name to remember, but it’s important to get these things right, in case there is another group with one of those other very similar but totally different names (“splitters!”). They missed a trick not being called the Christian Lutheran Episcopal Fellowship though, because the acronym would have been “Clef”, giving them a possibly great musical symbol to use as a logo. Instead the Belfry has a very angular, almost runic symbol. They’re also the meeting place for the Christian Orthodox Fellowship, no I mean the Orthodox Christian Fellowship, and the Unitarian Universalist Campus Ministry Group (ok, I give up). It is fun though to come up with humourous pretend names for religious groups to come up with funny acronyms, but I won’t share any here (because I haven’t thought of any yet).  So anyway, the Belfry is a religious place, so the bells are likely more spiritual in nature than actual bells (in fact you might say it is “bell-free”). Shame, who doesn’t like a good church bell ringing.

Anyway in case you are interested in whereabouts this is on A Street, here is a handy diagram showing some of my other A Street sketches. Click on it to see more detail. Looks like there are a few gaps I need to fill. Now I know what I can sketch this week!