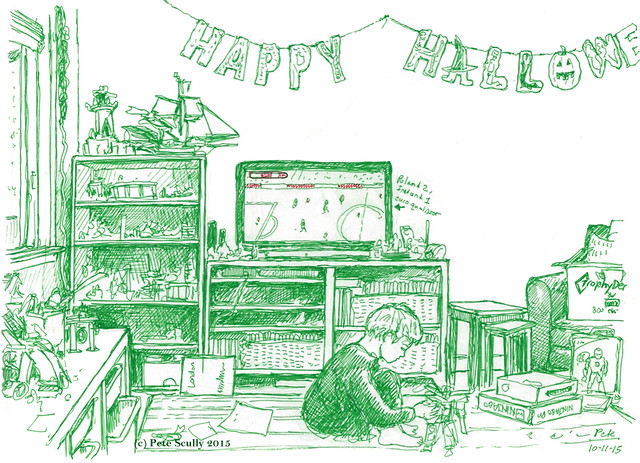 Did you see it? Did you see Ireland beating Germany? I missed it! But it did happen. I’m talking about the football now. I’ve been proudly parading my various Ireland shirts from the past twenty-one years, but it’s not just the Republic. Northern Ireland may not have beaten the world champions, but they did win their group and will be going to Euro 2016 in France! I’ve not seen them play in a tournament since Mexico 86, the first World Cup that really did mean the world to me (not for Northern Ireland, but for Panini stickers, Gary Lineker and Diego Maradona. I can still hum the “Aztec Gold” TV theme tune used by ITV, at least I think it was ITV). I was ten. I don’t have a Northern Ireland shirt, despite my family connections (my grandad was from Belfast, my other grandparents all came from the Republic) but I might get one now. Wales also made it to the Euros, and I’m super happy about that, though I’ve never been to Wales and have no Welsh family, I do like Gareth Bale, and their manager. England made it too by winning all their games, whatever. But the Republic of Ireland, despite beating Germany and going a point behind them in the qualifying table, were not quite there yet. They had to go to Poland, and either win or get (specifically) a 2-2 draw. Not easy against Poland and their striker Lewandowski, who has scored about four hundred goals in the past couple of weeks alone. (American readers: I am joking, it was more like two hundred). It was on TV. It was Sunday. I wasn’t going anywhere. While my son played on the floor, I watched the game and sketched, naturally in green. Remember, we needed a 2-2 draw. Unfortunately, Ireland lost 2-1. So near, and yet so far. And so Ireland go into the play-offs to see who will get the final few spots at Euro 2016. There is still hope yet! However, poor old Scotland didn’t make it this time, so the almost-there prospect of a tournament with England, both Irelands, Wales and Scotland all in it was just a distant dream (what, there already is one? Oh right, in Rugby…)

2 thoughts on “green is the colour”