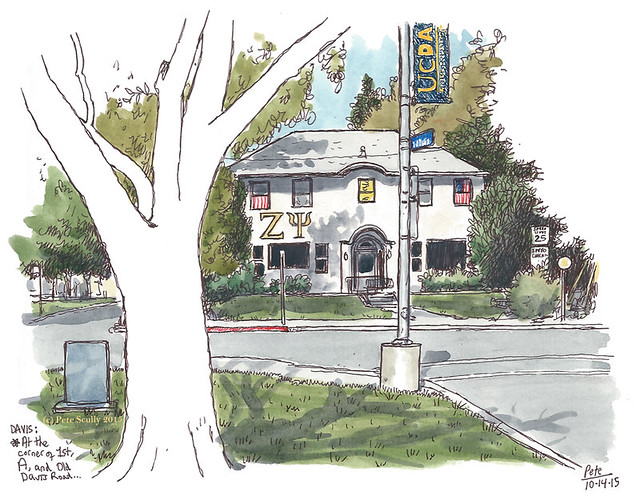 The last time I sketched this Frat House it was a different Frat that was in there. I’m not a massive fan of the whole Frat thing, but then I’m a pushing-40 British sketcher so I don’t know, I’m not the demographic. This is that time of year though isn’t it, when the Fraternities do all their Frat Boy stuff, and the Sororities do all their Sor Girl stuff (it isn’t actually called that, is it. See? I’m clueless). I’m actually surprised that the helicopter parents of these students haven’t set up special societies of their own, to keep an eye on them, Mat Houses or Pat Houses, as it were. That is a terrible idea of course, which makes it surprising that they don’t exist (and they probably do). You see all the boards over campus each year for ‘Rush’, why they are in such a hurry I don’t know. Young people, eh. Actually I was in a hurry when I sketched this, as the lunchtime ticked away and I needed to go and eat something unhealthy. Anyway, this is at the very start of campus, the intersection of Old Davis Road, 1st Street and A Street.