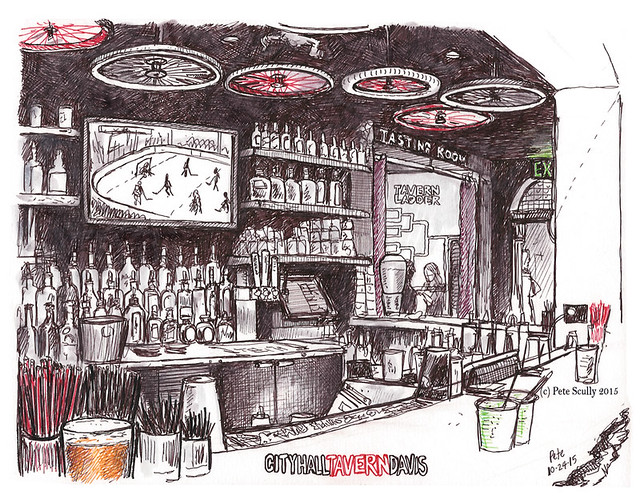 It was time for another bar sketch. After a Saturday of AYSO soccer, pirates versus knights battles, Disney Infinity super-hero smash-downs and the occasional lightsabre duel, I headed out in the evening to do some drawing, read some comics and have a few beers. I love being a grown-up. Since I have a new book out (available right now!) in which I talk extensively about drawing bars in low light, I felt I should add to the sketchbook a little more, so I popped into the City Hall Tavern, which I last sketched two years ago, to again attempt their bar area with the bicycle wheels on the ceiling. Ice Hockey was on the TV (they just call it ‘Hockey’ here; similarly they say ‘cubes’ instead of ‘ice cubes’, ‘cream’ instead of ‘ice cream’, and ‘stares’ instead of ‘icy stares’ whenever I make this joke). They get so aggressive and fighty in Ice Hockey. For a game in which you are essentially just skating around trying to hit a small disc that won’t stop moving, players seem to get unusually angry, angrier than in most sports. Perhaps it’s because they dress head to toe in armour and carry huge sticks, it brings out the medieval warrior in people. Maybe the sport needs to change its image a little, and rename itself ‘Nice Hockey’. Ok, from now on I am calling it ‘Nice Hockey’ in the hope that it catches on. And those stares I get when I do will be called ‘Nice Stares’.  So, back to the sketch. I sat on the opposite side of the bar to when I last sketched this bar, for a slightly different angle. I follow City Hall Tavern on Twitter, and I notice that they are using one of my sketches of their bar as their header image (I think I said ok to that), but they have removed whatever was on the screen and replaced it with an actual shot from a real basketball game. Hmm, no, not really a fan of that. Replace it with a shot of Harry Kane scoring for Tottenham, maybe, or of Jose Mourinho huffing as Chelsea lose again, perhaps. Anyway, I tried a couple of different beers, one was a Gose Wheat beer (tasted like Strongbow), the other was a Sudwerk Aggie Cruiser, which was nice too. Lots of people were coming in drinking cocktails as part of some local bar crawl event that was happening. By the time I was done with my sketch, all the City Hall bar patrons were standing and chatting and dancing, and so I popped down to De Vere’s for a comfy seat and one more wheat beer to read a couple of comics (“the Unbeatable Squirrel Girl” if you’re interested, and it’s great) before walking home.

Here are my previous City Hall Tavern sketches (inside only; I’ve sketched the outside building since way before it was a bar): 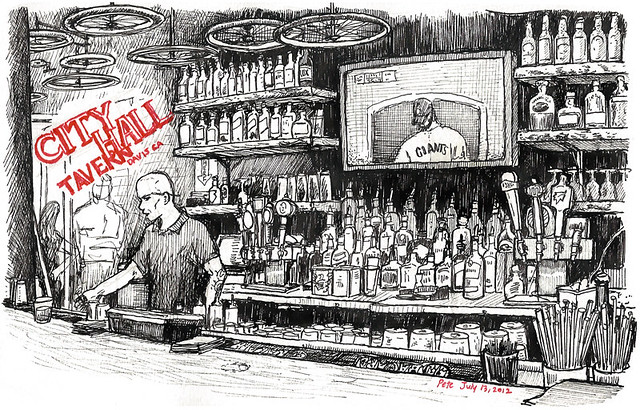 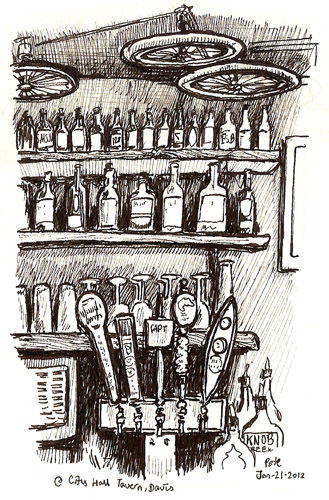