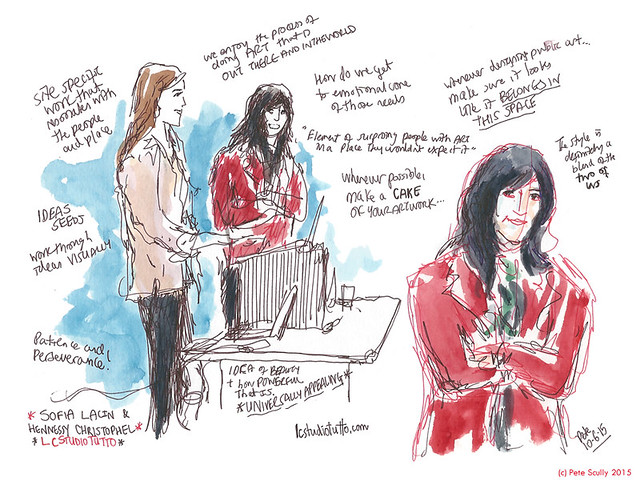 Last week I was invited to attend an undergraduate Design class at UC Davis, DES001, by Professor James Housefield. I was there to sketch the special presentation by two guest speakers, Sofia Lacin and Hennessy Christophel, who form a design team called LC Studio Tutto. It was in a large lecture hall (Kleiber; I’ve sketched the outside before), quite a lot of people in there. I sat on the side at the front, it was a struggle to get a good view of the speakers so I moved on to the floor! They were very interesting, and talked about their local projects, including “Same Sun”, the colourful one on the massive water-tank that you may have seen as you enter Davis westbound from Sacramento. This one. Pretty cool! Very interesting to hear about their design process. Of course I had to sketch quickly and try to add a few nuggets of what they said. A lot of it resonated with me, from what I learned and experienced back in the days of Interactive Theatre at uni.  Here’s a tip when doing this sort of sketch, it is always important when doing that to get the relevant information, if you write down the wrong things it can affect the context and undermine what public speakers really said. That said, the line that stood out most for me was “Whenever possible, make a cake of your artwork”. Now, this was accompanied by a very beautiful picture of a cake of their artwork, but, well, I couldn’t agree more. All I could think of afterwards was fire-hydrant cakes. It made me very hungry! 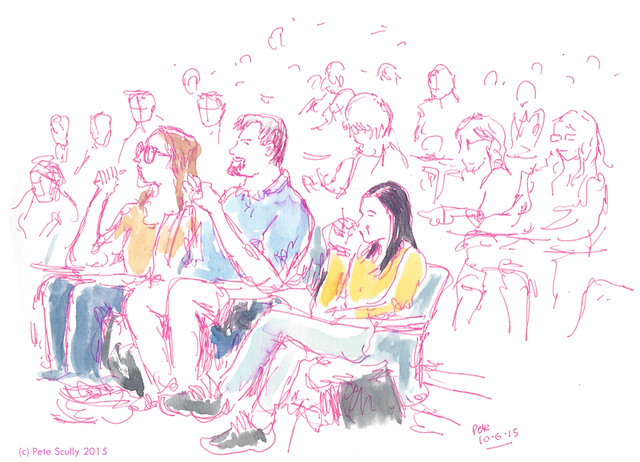 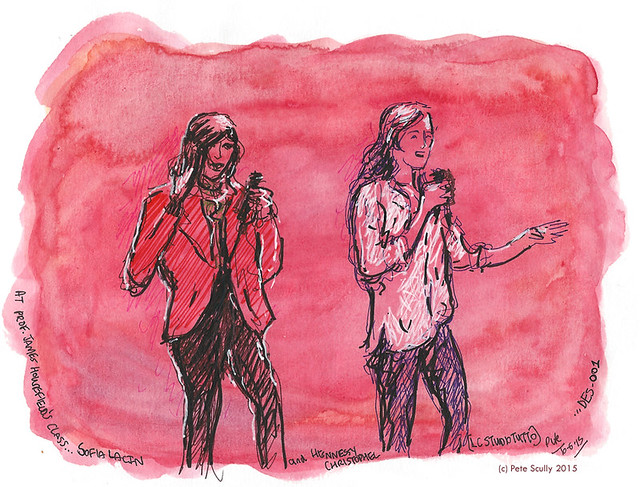 Sometimes when you are going to sketch people, it’s fun to pre-prepare a block of colour so that you can draw over it. I’ve done it before, it is fun. Unfortunately this time I chose red, and although one of the speakers Sofia was wearing red, the overall effect didn’t really work quite as well as I’d hoped, and the likenesses weren’t all that close. That’s ok. Perhaps I needed more words all around the figures like I did when pirate-sketching that one time. I didn’t have much time on me though, because it was wrapping up, and was my turn to speak. I got a few minutes to say some things about sketching in general, and show my sketchbook to the audience projected onto a big screen. 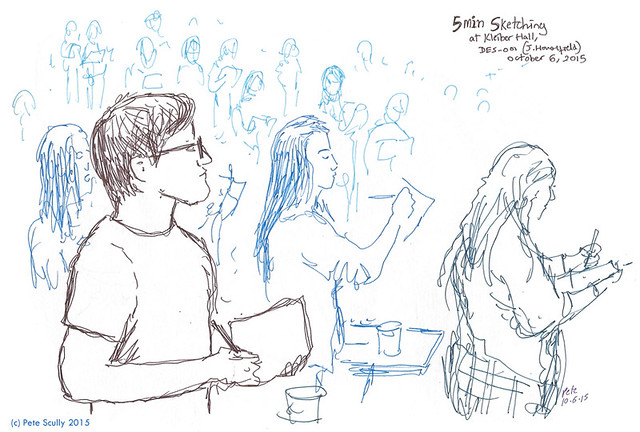 One interesting thing in this class, Prof. Housefield has his students all stand and sketch for five minutes at the start of class, while music plays over the PA. They all sketched an image of Magritte’s pipe, but I sketched them. Just five minutes though! Overall it was a lot of fun, and I had some very nice conversations afterwards. I didn’t mention, but a couple of weekends ago my sketches were featured on the UC Davis Instagram account all weekend as an “artist’s takeover”.  Which meant that I myself had to start an Instagram account. I’m @pwscully, if you are interested. (@petescully, which is my Twitter and everything else handle, was already taken, so I went with my “novelist name” – thanks, kid Pete of the 80s – and now in 2015 of course I don’t use for the book I have actually authored). I haven’t got the hang of the old Instagram yet either, and approach it grumpily as another thing which doesn’t quite make sense. But I’m veering off topic.

So many thanks to James Housefield (I’ve sketched him too) for inviting me and many thanks to Sofia and Hennessy for their inspiring talk. I hope you can check out their work.