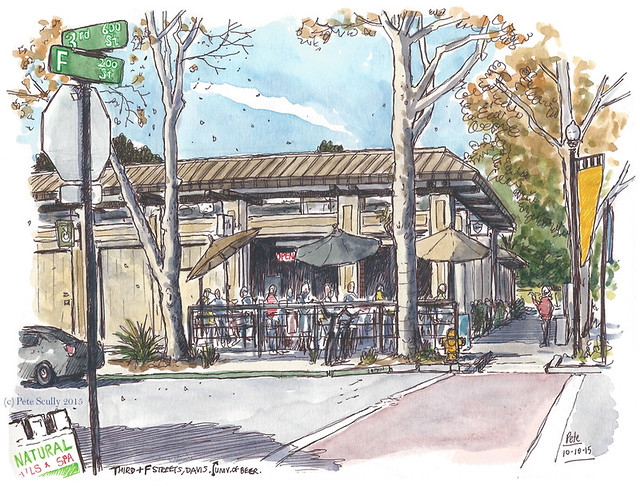 Saturday afternoon meant sketching. I spent the morning coaching my son’s soccer team (did I mention I am coaching my son’s soccer team? We are called the Blue Torpedoes this Fall, and AYSO is a lot of fun) (I designed the badge again) (by the way when I say ‘soccer’ you know I really mean ‘football’ right, I’m only saying that because that’s what they say) (ten years in America won’t break me) (although I did in my weekly handout point out to the team that ‘soccer’ is in fact an English term derived from ‘Association Football’, it’s also a sport from England so you know, listen up, I know what I’m talking about), and then in the afternoon I opted against going to the UC Davis ‘Brewfest’ because ‘tired’ and ‘expensive’. The Aggie’s homecoming football game was on Saturday (obviously you know when I say ‘football’ I mean ‘American football’) (actually so people understand me, over here I always call it ‘American football’, or ‘gridiron’, or ‘helmet-ball’ or ‘space-rugby’), anyway my family all went to see it but I opted out because ‘sketching’. It was lovely weather. I cycled downtown with the intent of drawing something beautiful. I have a book out you know, so I’d better get sketching. I didn’t sketch enough in September (because ‘busy’ and ‘lazy’), and I didn’t want anyone buying the book and then looking up my site and it all being Lego that I drew two months ago. So I have been busy sketching the past week or so, and will be posting those soon. Well, I couldn’t decide upon ‘beautiful’ but this corner downtown of 3rd and F Streets had the sunlight hitting it in just the right way, with those two trees looking a lot barer and autumnal than other ones. Leaves were tumbling gently; fall is in the air (you know when I say ‘fall’ I mean ‘autumn’). This is the University of Beer, which I have sketched before on the inside a few times, and it was busy on a Saturday afternoon. I even saw someone wearing a USA 94 football shirt (alright, soccer jersey), the one with the wavy red stripes (think “Alexei Lalas’s beard”), which made my football-shirt-geek self jump up and down with excitement. Though I do have the USA 94 Ireland shirt (the one Ray Houghton wore when he scored the winner against Italy), I was actually wearing the 1995 Ireland Umbro shirt  (the one Father Dougal used to wear to bed on ‘Father Ted’). The mid-90s, ladies and gentlemen, a high point for me. I should have sketched him, or rather his shirt. I did pop in for a pint post-sketch though, and decided to give my pencil a quick run-out with a five minute sketch of the afternoon drinkers cooling off from the heat. Yes, Autumn is coming, but it’s still in the 90s. 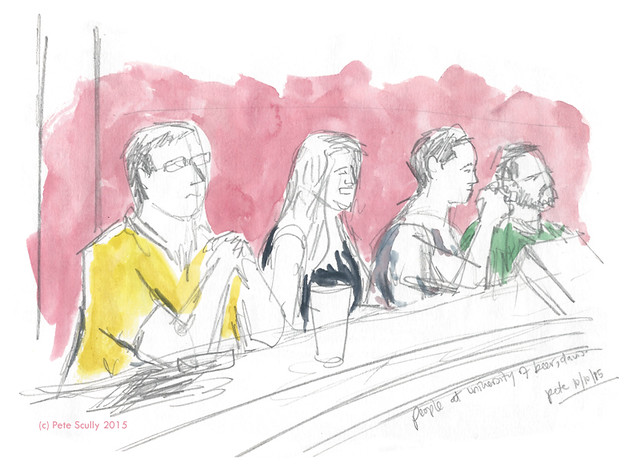 One thought on “autumn calling”