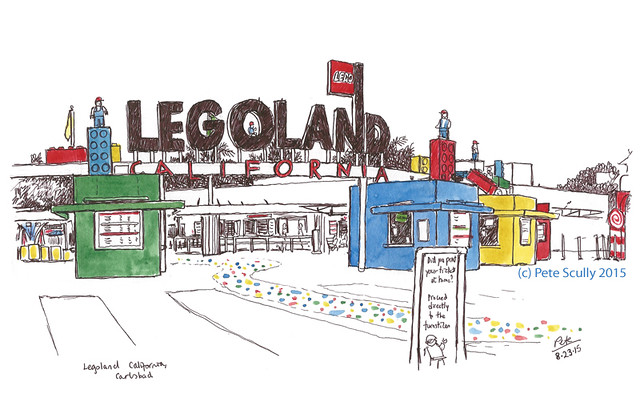 If you’ve been following any of my posts lately you may have seen that we like a bit of Lego, chez Scully. Last weekend we wet to Legoland, where everything actually is awesome. It was our second trip to Legoland California (and we went to Legoland Windsor last year too), and you might think that, well Pete loves sketching, he loves Lego, he loves sketching Lego, perfect yes? Well this was the only sketch I did, I was having too much Lego fun! It’s a great place for a seven year old (I’m not seven by the way, I’m pushing forty). We stayed a night at the Legoland Hotel, in a knight-themed room, and spent a lot of money in the Big Shop. What was nice about this trip was we spent the afternoons either at the hotel pool or at the really fun Chima water-park. Legoland is small enough that you can fit a lot in all in the morning, and it wasn’t particularly crowded, which was a surprise for the summertime. Last year at Windsor we waited almost an hour and a half just to get in! Here in Carlsbad there were very few long lines for rides (unlike at Disneyland), and we could just go back to the hotel for a rest if we wanted. The Star Wars section is better this year, with a huge Death Star and a bit where my son and I built little spaceships. Yes, everything was awesome. We will be back. 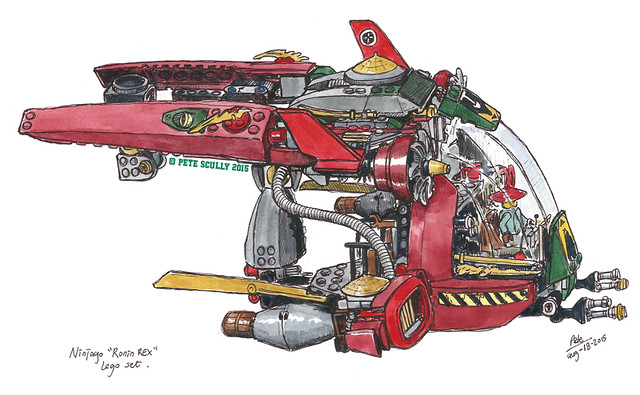 I hope you like Lego, because you’re just going to keep seeing more of it on this sketchblog. Denmark’s Greatest Invention. Occasional bane of my bare feet on the carpet. I’ve been busy Lego-sketching, especially mini-figures, so many mini-figures. You’ll get to see those once I’ve coloured them in. That won’t take too long. In the past week I have also been to Legoland, where you might imagine I did a lot of sketching. You might imagine it would be the perfect sketch-paradise for someone like me. Well in fact I only managed one sketch because Legoland is so much fun! More on that another time. This was done before the trip, and is one of my son’s newer Lego sets, the Ninjago Season 5 ‘Ronin REX’. You have no idea the anxious wait for the season 5 Ninjago stuff to come out (my son’s anxious wait, not mine, but yes mine too). It was agonizing, and all the more so because when I had been in England in June I had seen all of these and didn’t buy any to bring home, figuring they would probably be out in the US already (same reason I am still new-Tottenham-shirt-less). Two months he waited, saving his money (I say his money, I gave it to him). In the meantime the show came out, and then finally the toys were in the shops. He really wanted this particular set, which has one of those Airjitzu things actually built into it, and he even entered a competition to win it, just in case (I told him that if he does win, we’ll keep the second one in its box and sell it in a few years time for three times the original price). This is the flying vehicle of the Han-Solo-esque scoundrel character Ronin, introduced in season 5, and I must say that the shape of the ship (and the colour scheme of Ronin) really reminds me of Slave 1, Boba Fett’s ship. I drew this in the book of my son’s things, which is becoming ever more Lego-heavy. As it should!