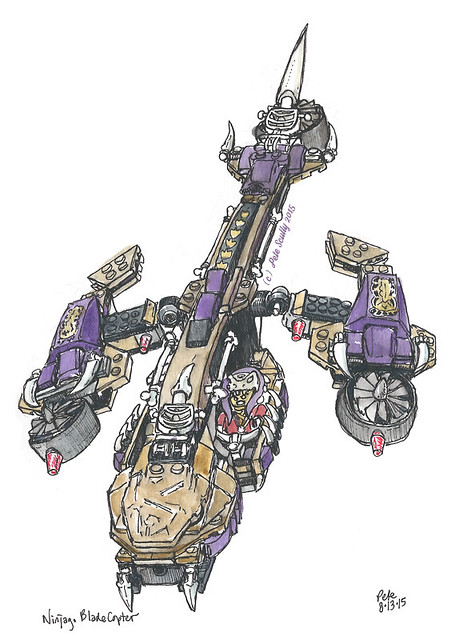 More Lego, drawn in the book of my son’s stuff. This is the Ninjago Blade-Copter (the what, i hear you ask?), a recent addition from the season before the most recent season of Ninjago. You have to live in this world. So, in season 4 of Ninjago, the ninjas travel to an island to take part in a martial arts tournament organized by the mysterious Chen (who normally runs a noodle shop), where the other participants are all masters of their own various elements (such as the element of ‘sound’). The tournament however turns out to be a cover for a more nefarious scheme (stealing the elemental powers of each ninja). It’s a solid season with lots of characters and makes a lot of fun references. As I drew this last night, ironically, probably the biggest influence of all came on the TV: Bruce Lee’s classic Enter the Dragon. I am a big fan of this movie, and can probably quote all the words if I have to. And do the facial expressions of the hapless guards. If you ever see, I will prove it. Just don’t ask me to do any of the kung fu moves, I’m a tad  out of shape. In Enter the Dragon, Bruce Lee fights in a tournament on an island organized by the mysterious ‘Han’, but the tournament turns out to be a cover for a more nefarious scheme (recruiting fighters to his drug and crime empire). There are a few more parallels (one of the Lego sets is called ‘Enter the Serpent’; the scene where Chen punishes everyone because certain people have been sneaking around the palace at night; the scene where Chen tries recruiting Jay while showing him his collection of weaponry from the past, just like when Han tries recruiting Mr Roper), and in a previous season the ninjas learn the style of ‘fighting without fighting’, a direct reference to Bruce Lee’s chat with the bully Parsons on the boat. Look, you have to live in this world, ok. Master Chen is a pretty silly and whimsical villain though, but Mr Han is a classic supervillain of the highest order. He has a classic supervillain face; he lives in a palace surrounded by utterly useless guards; he is missing a hand (he keeps the skeletal remains in a glass case) but has a series of dangerous attachments such as the one with four-knives (for added “snikt”). Truly, as Mr Williams says, he comes right out of a comic book.

I drew this using a black Pentel pen, which I swear didn’t used to run much with a wash, but actually runs all over the place. Back to Microns for black lines I think. I use the non-running brown uni-ball signo um-151 pen mostly these days (the black variety runs bad). It’s on the Stillman and Birn Alpha paper.