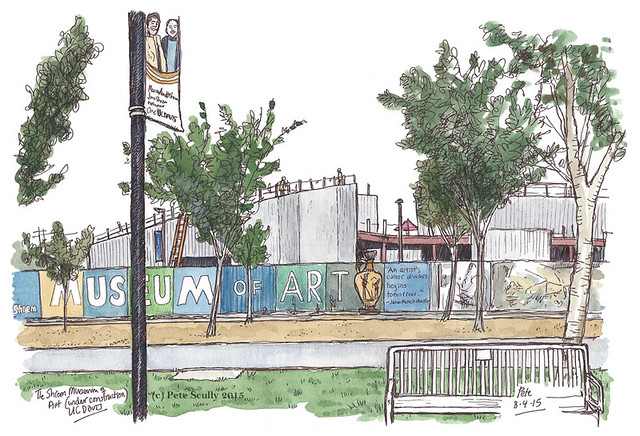 The Shrem Museum of Art (under construction) now has some walls, covering the skeletal framework that has been going up these past few months. This building is bigger than the Pitzer Center (the new Music Recital Hall whose construction I am also sketching, see previous posts) but it also had a head start – but the race is on! Which will be finished first? It’s exciting. It’s exciting because it means more ART and MUSIC. More Sciences are great, UC Davis is cutting edge in so many fields but we are also great at art. I’m not talking about me and my little drawings of things, but the bigger art world of Davis and UC Davis, which is substantial and world-renowned, encompassing not only fine art and music but also the dramatic arts. I sketched the scene above on an overcast day earlier this week, meaning I didn’t have to find some shade and could sketch the front without getting too hot in the sun. The lamp-post in the foreground carries the image of Maria Manetti Shrem and Jan Shrem, the donors for whom this museum is named. Wait hang on, an OVERCAST DAY IN DAVIS IN AUGUST? I never thought it would happen again (and unlike last week, it was overcast with clouds and not smoke from all the wildfires, though that was probably mixed in). Yes, actual clouds. For those of you who live in Davis and aren’t sure what clouds are, them being so rare here, they are made up of moisture and float in the sky. Moisture, for those of us in Davis who aren’t sure what that is, it’s made of water. Again, for those not sure what water is, it’s what happens when – look I can’t keep this up. It’s a long-winded way of saying this unending drought we are having in California seems to have no end in sight, so to see actual clouds is encouraging. Last night it even rained a few heavy glops, though it all seemed to evaporate upon impact. We’ll take what we can get in this state. 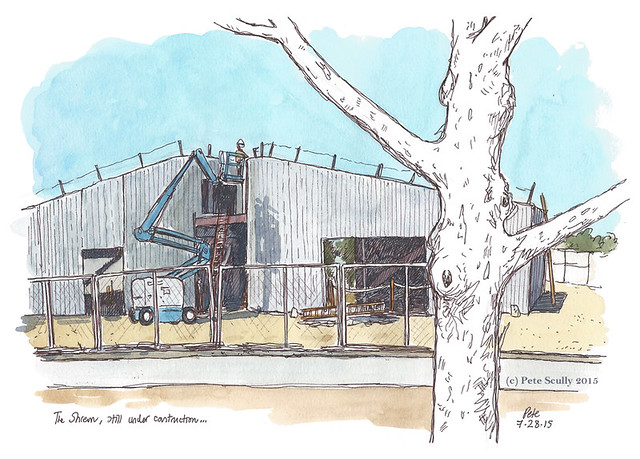 I did sketch the side of the Shrem museum last week on a far hotter and sunnier day. I found the shade of a tree and listened to the X-Men podcast “Rachel and Miles X-Plain the X-Men”. I have mentioned it before. It’s a really great podcast going through the history of the X-line of Marvel Comics, the “ins, outs and retcons of your favourite superhero soap opera.” Since I started listening to the show certain phrases they like to use have become stuck in my head, such as “Angry Claremontian Narrator” (the voice used by Chris Claremont when narrating comic panels, often berating the characters), “Ah’m Nigh Invulnerable When Blastin'”, a phrase uttered by Cannonball (Sam Guthrie), “The Eternal Moppets of the Marvel Universe”, a reference to two mutants who never seem to age beyond childhood, and “Charles Xavier is a Dick”. If you’re not listening to it, even if you are not an X-Men fan, even if you don’t listen to podcasts or human voices or read anything, I still highly recommend it. Here’s their website. Anyway back to the sketch: so yeah, the Shrem Museum of Art, under construction still.

Previously on ‘Constructing the Shrem’: