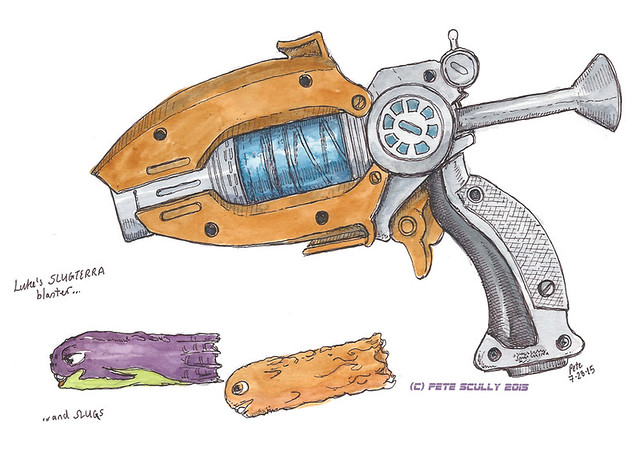 This is another of my son’s toys. It is called a Slug-Terra Blaster, or something like that. It is what they use in the TV show “Slug-Terra”, which he really likes. It’s actually not a bad cartoon, but the premise of it is that they are in some sort of underground world where slugs are not only intrinsic to the society somehow but are used as weapons. Well, they fight on behalf of their owners, a bit like Pokemon I suppose, I don’t know. All the slugs have different abilities, some get really close to their owners, and then they get blasted out of these things, and then it’s all zap, pow and ka-blam. Oh there are evil slugs too. Now these slugs are all different colours and have names, but this isn’t a society of slugs, the people are all either humans (I think), trolls (maybe), or weird mole-folk (I really have no idea). One of those has a comedy Mediterranean accent. Or are the evil slugs zombies? Or wraiths? I don’t actually pay much attention. So you can imagine my son’s excitement when we spotted these at Toys R Us (I always wonder how that store got its name, did they got through a lot of other stupid combinations before settling on that one, “Toys Am We” “Us Is Toys”, “Toys Er America”, “Help”) (I used to call it “Toys Ya Us” because that backwards R looks like a Russian “Ya” (я). This was during the Cold War as well so I’m surprised people didn’t think it was some sort of Russian spy agency, I mean it all fits in the name…Cold War conspiracy theory at slightly higher prices than other stores, I like it!). So, this doesn’t works like a toy gun with a trigger (we’re not really into the toy gun thing, all the Nerf rubbish. Fingers and saying “pew! pew! pew! is fine though). Instead, it has a spring mechanism inside, you pull back the handle, let go and the little slug comes out. He has another blue one which looks cooler than this but I didn’t draw it, so you’ll have to imagine how cool it is (or watch the show! If you watch the show maybe you can help explain it to me).

One thought on “you terrestrial gastropod molluscs and your guns”