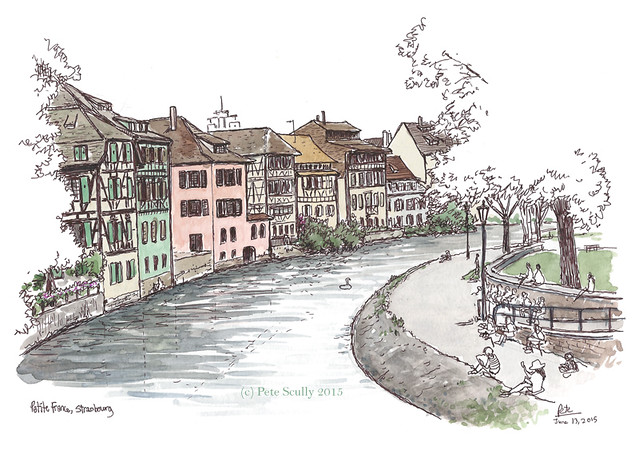 The first time I came to Strasbourg was twenty years ago, and I arrived on a coach some time after midnight. It was part of an exchange program between sixth-form colleges in England and the Lycee Jean Monnet in Strasbourg, and from that trip in 1995 I fell in love with the city. I was learning both French and German at the time, so naturally Strasbourg was perfect. I went back a few times since, but the most recent was over ten years ago, and so when the opportunity (let’s call it the excuse) came up to visit Strasbourg again, to meet up with the French Urban Sketchers at the 3rd National ‘Rencontre’, I couldn’t resist. It was the twentieth anniversary of that pretty formative trip and Strasbourg was fading from my memory, so I simply had to come back and draw it, and draw it A LOT. Just as twenty years ago, I arrived after midnight, on a TGV from the south of France. I arrived to discover that the whole train station was now covered in a massive futuristic glass bubble. I walked to my hotel right by the cathedral, using the massive, towering steeple as a compass.

I met a group of French urban sketchers the next morning down at Petite France, where I stood on a bridge near the Ponts Couverts and sketched the scene above, the river Ill winding sleepily past timber-framed houses. You can see the sketchers gathered on the banks. I recognized a few from their sketches online; I’m a big fan of the French Urban Sketchers group, having met several of them in Barcelona, and I eagerly follow them on all the usual online places (the main site is france.urbansketchers.org). It was a cloudy morning, and the occasional raindrop splashed down, but there were no more storms, and eventually the sun came out. The weather here in Alsace was perfect for being out sketching. 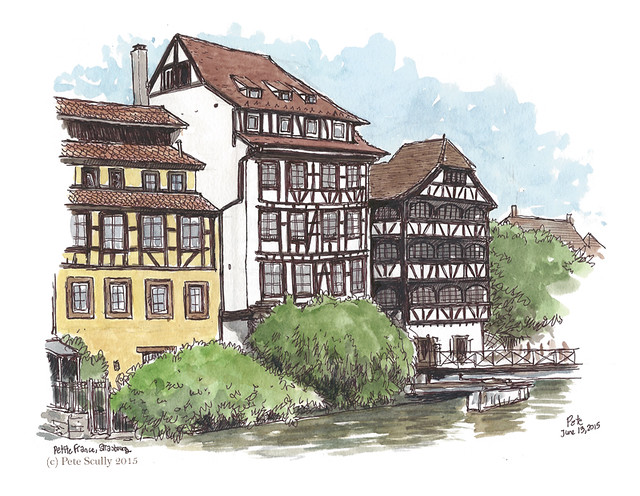 Petite France is an area of Strasbourg famous for its narrow cobbled streets and old timber-framed buildings, where the river splits off into canals criss-crossed by footbridges and the occasional lock. It is very peaceful, or would be if it weren’t for the groups of Segway tourists whirring along the cobbles. There was a lot to sketch down here, and I would come back every day. Petite France is not, as the name suggests, a model-village based on the whole of France, nor is it made of Lego, nor are the people really small like Lilliputians. It gets its name from a disease, specifically Syphilis, which was known as the ‘French Disease’. Actually (according to a tour guide on a Segway) it was also known as the ‘Italian Disease’, because French troops brought it back from Naples at the end of the fifteenth century. Actually it was probably first brought into Europe from the Americas, but nobody knows for sure. Anyway, those affected soldiers were often brought here to this part of Strasbourg to be treated (or at least kept out of the way), giving the area the name “Little France” after those afflicted with the French Disease. The city was part of the Holy Roman Empire at the time, not France – Strasbourg, or Strassburg, was for much of its history decidedly German, and its native language Alsacian is a form of Low Alemannic German.

Here I am in a France shirt (size Large, not Petite) sketching by the river Ill. Ironically people used to come here because they were ill. Anyway, all potential jokes and puns now exhausted, I decided to move along. 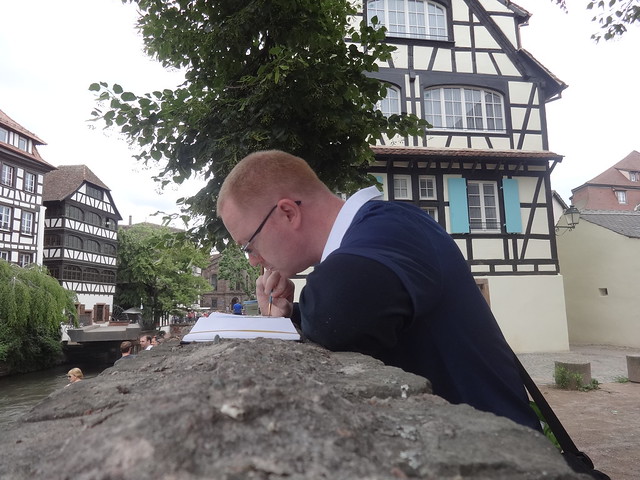 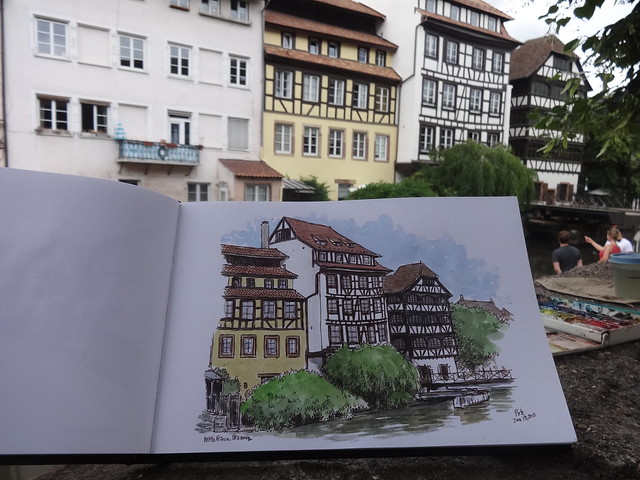 I stopped for lunch at a little place on Rue des Moulins, around the corner from the spot above, called ‘Le Baeckoffe d’Alsace’. I sketched the scene below while waiting for my food, and sipped a nice cold glass of ‘Fischer’ blonde beer (or Pecheur, depending on the glass), which was a real treat of a beer. Alsace knows its biere blonde. It also knows its food – I had the Cuisse de Poulet au Riesling (chicken leg in a Riesling-based sauce) with Spaetzle “Maison” (Spaetzle is a German side dish which my wife’s grandma used to make). This was superb, especially the Spaetzle, which was seasoned deliciously, and I could have eaten it all day long. 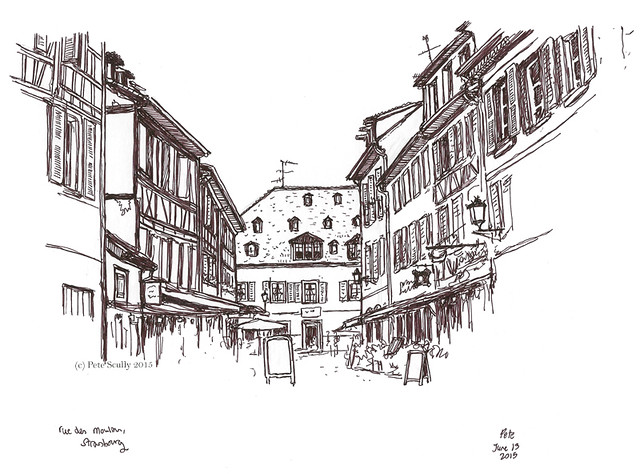