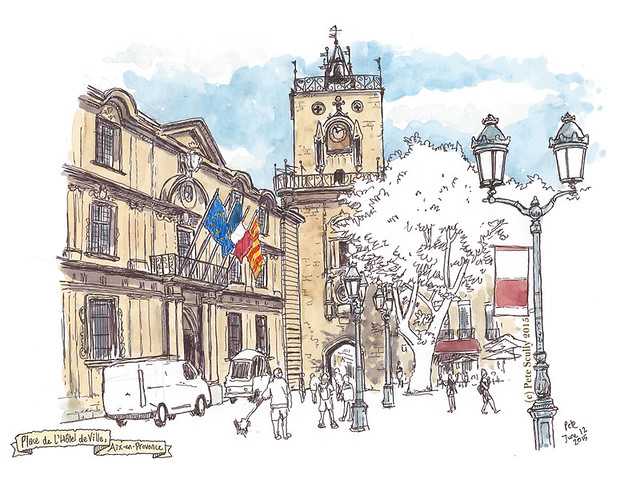 Day two in Aix, and I awoke to the sound of thunder and rain. A big storm was washing over France, and while the rain stopped the moment I stepped out of my hotel (thanks, rain!), the air was soupy. My head was a bit soupy too after going to O’Sullivan’s the night before, but after a pain-au-chocolat and an escargot (the pastry, not the actual snail) I felt right as, well, rain. I had avoided sketching the clock tower outside the Mairie in the Place de l’Hotel de Ville the day before, mostly because I ran out of time just saying that sentence, but I wanted it to be the first thing I sketched in the morning. It’s the iconic view of Aix, it may even be required for all visiting artists to sketch or paint it at some point. This spot is just around the corner from where my then-future-wife lived when we started dating, so there were lots of happy memories walking up there. The three flags outside the government building incidentally are the French flag (in the middle), the flag of Provence (red and yellow), and the flag of the European Union on the left, which at the time of writing still existed. I’m jesting of course, but all this talk about the Eurozone falling apart brings back more Aix memories. I was living in Aix at the time of the changeover, when we all gave up our Francs and Deutschmarks and Lira to take up the exciting new Euro. It was exciting too; while my bank account had been formally in both Euros and Francs for a while (as it had been when I lived in Belgium a couple of years before), now we could get to use the real thing. The first thing I noticed, prices tended to get rounded up. We all knew the rate between the Franc and the Euro but with new coins, well, makes sense monsieur. Secondly, no fake money. I probably came across a counterfeit Franc at least once a week before January 1st, 2002, but in the first months of the Euro everything was real, or at least nobody knew how to spot the fakes yet. Thirdly, on trips to other Eurozone countries, no more exchanging currency. It was a happy, innocent time. On this trip however, I was having a great time with the Euro being so weak against the Dollar. I came back to the US thinking, man I should have spent more. But my time was short, my bag was small, and so I spent time on sketching. 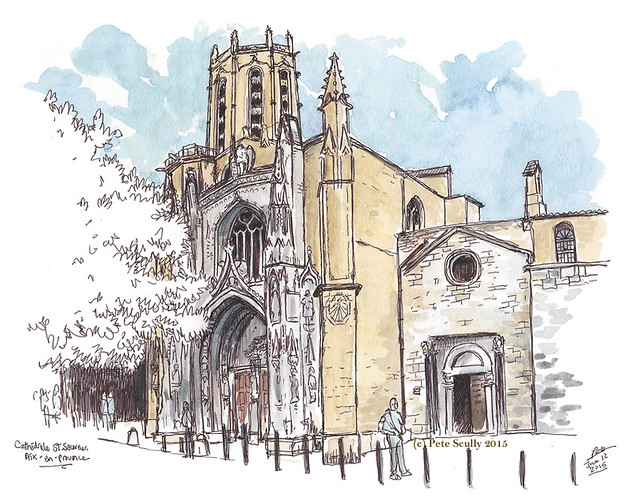 This is the Cathédrale Saint-Sauveur d’Aix-en-Provence. I love to sketch a cathedral, but I hadn’t planned on sketching this one because, my ratioanl went, I had drawn it already, about thirteen years ago. Never mind that I draw things again all the time and quite a lot has changed about my drawing in the past decade or so, I just didn’t fancy it. And then I got there and I’m like, well if you must. I love this building. It is gorgeous inside, dating from the twelfth century, but there were prior churches and maybe even a Roman temple on this site long before. It’s up the hill from the old town of Aix, nearby to where my wife was studying when I met her. There are a lot of visiting American students in Aix, especially around here. I did go to a party not far from here once, at an American frat boy’s apartment, though I had no idea what a frat boy was at the time. There was a lot of drinking, but I studied in England so that was hardly unusual (I thought them relatively sober in fact). For some reason I remember having a conversation with someone about how Robert de Niro is a terrible actor, and the guy who hosted had a map on his wall where every visitor could put a pin in the place where they were from. Fuzzy memories. 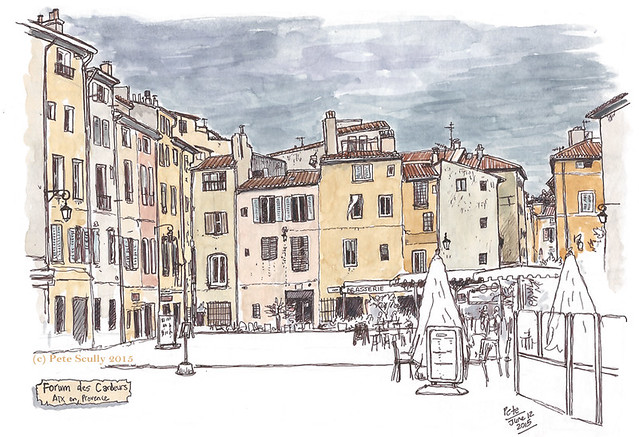 Do you see that sky? Do you see how dark it is? That’s what happened, all of a sudden, as the storm clouds rolled back in. No rain, just heavy, ominous skies. I decided to skip eating lunch at the Forum des Cardeurs, a long sloping square full of restaurants and old rooftops where I used to eat quite regularly. Sketching before eating I’m afraid; well, Prima Pasta, whose seafood pasta dishes I always enjoyed, have big covers over all the outdoor seating now to make it feel more ‘indoors’, so no nice views to sketch while waiting to eat. I made do with a Quick later on instead (that’s the French fast food place, and nice it is too). Those clouds did look ominous though. While I sketched, two guys in their car got blocked in the square by another car which had decided, in typical southern French fashion (yes, you know what I’m talking about) just park directly in front of the only exit to the square, as if, huh no biggie. These two guys honked their horns patiently, quick toot at first, then a longer one, then a seriously-come-on one, then repeatedly, until when nobody came they just got out, exasperated, and looked at the offending car over and over. No car owner came. Shoulders were shrugged, ladies and gentlemen, shoulders were shrugged. They didn’t think to call anyone to remove the car. Now if this was England, there would have been a lot of swearing, letters would have been written to the Daily Mail, LBC would have been phoned in, the license plate would have been named and shamed and if the owner ever turned up it would have been curtain-twitching at twenty paces. Well the driver did eventually saunter by, a very earnest “oh, désolé“, another shrug, and the two stranded blokes just casually waved it off to say, no problem, you’re here now. And that was it, all very laid back. That little scene pretty much summed up a lot of how I remember people here in Aix. Time just happens, and that’s that. My barber in Aix, who famously never gave me what I wanted but always came up with a better variation on my very unimaginative hairstyle, used to spend half the time cutting my hair and half the time chatting away to people passing by in the street. Time is different here. 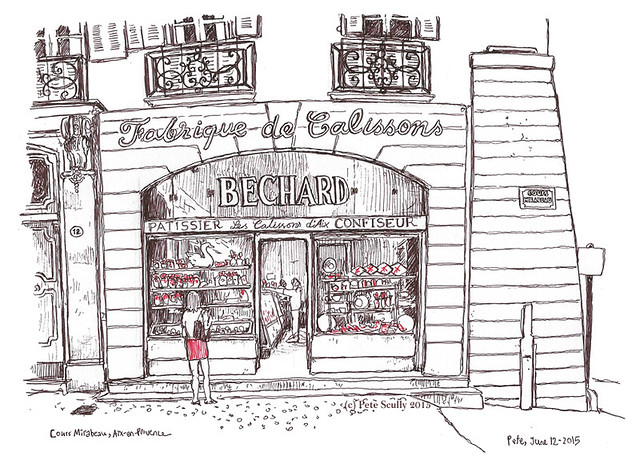 That said, time was getting on. I had time enough for one more sketch before getting my bus to the TGV station. I went to the Cours Mirabeau and sketched Bechard, the Calisson makers. Bechard is a lovely sweetshop which specializes in Calissons d’Aix, small almond-shaped sweets made from almonds and dried fruits, similar to marzipan but a bit nicer. This is the traditional Aix candy and yes, I brought some home.

And then it was goodbye to Aix! Well, au revoir. An all-too-brief trip, but a nice reunion. I don’t know anybody here any more, but I still know the city, and that is enough. Aix-en-Provence was the city that changed the direction of my life, set me on the path I am now on, both personally and artistically. It’s so far away now, but still there, for when I need it. I got on my bus to the TGV, and within seconds the heavens opened with an enormous downpour – perfect timing you might say! It could have been a bit more perfect though – my bus got stuck in absolute standstill traffic on the autoroute, caused by the thunderous storm. Panic set in. Sacre bleu, I thought, I’m going to miss my train to Strasbourg. Traffic wasn’t even crawling, it was just stopped. But thankfully I made it, and the train itself was delayed – more fortuitous traveling. I settled onto the packed TGV, and zoomed north through the impenetrable grey.

Actually no, next up is a map of Aix plus a little post comparing Aix sketches from twelve or thirteen years ago and now…

5 thoughts on “not something distant and unfound”