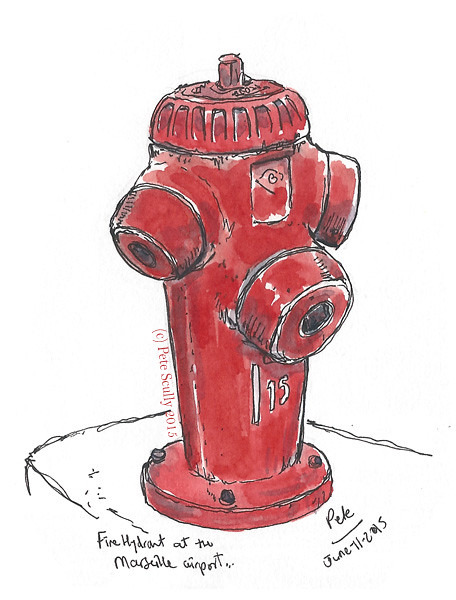 I hadn’t expected to see fire hydrants in Provence, but I left the airport and, there they were. I obviously wasn’t as interested in drawing them when I lived there before. Maybe I thought that was weird. Directing a play in which wolves fought with lightsabres against people holding day-old baguettes, absolutely fine; sketching fire hydrants, get away you loony. I’m sure that is the first thought people have when they see me sketching a hydrant. “Les bouches à incendie“, that is what they are called here. Or ‘bouche d’incendie’. Anyway, I sketched the one above while waiting for my navette (that is the shuttle bus between airport and town) at the Marseille-Provence airport. The one below was started while waiting for my first poulet-frites in ten years, and finished later. 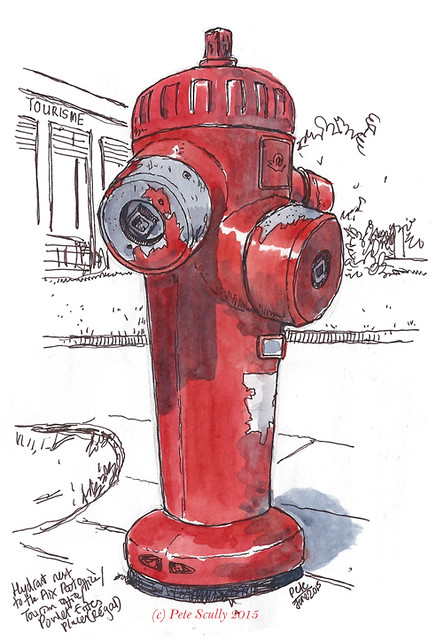 “Poulet-frites”, I hear you say? This was my favourite meal when I lived in Aix. There were a few places I would get them, the best being the little place outside the Super U, but I also liked “Le Regal” as well. Well a decade later Le Regal had moved across the street to a spot outside the post office, significanty upgraded its friterie stand, but still they produce lovely poulet-frites. Poulet-frites is basically a small baguette filled with chicken and the sauce of choice (I love le mayo), then topped off with loads of fresh frites (French Fries to you). Poulet-frites, I love you very much. There is my poulet-frites on the right. 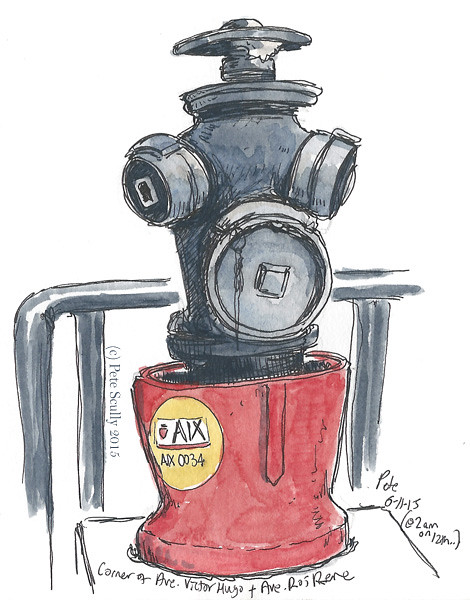 Lastly, this one, a semi-naked fire hydrant on the corner of Avenue Victor Hugo (the famous writer / cartoon crimefighting duo) and Boulevard Roi René (the last king of Provence / cafe owner and helper of the Resistance in WWII). Do you remember when I sketched fire hydrants at 2am in Los Angeles? Well I sketched this one at 2am as well. I was having a stroll through the still-balmy streets on my way back to the hotel after a night sketching an old pub I used to know, and this one caught my eye. When I was done sketching, I popped into a late-night convenience store to get a nice cold Fanta Citron to drink. A drunk man in the shop smiled at me and said, “eh, tu es gourmand!” I had been looking at the Mars Bars and though he might have been sarcastic. He then patted my tummy, and said again, “tu es gourmand, monsieur!” Cheeky get, I thought, sure my belly’s getting a bit portly but as I explained to him (because I felt the need to explain), “no no, it’s ok, I live in America.” I said that (in French) as if it somehow justified my paunch, like living in America with all of its fast-food and chocolate-based holidays will somehow contribute to weight gain (in my case it does, along with the desk job and general lack of exercise, but I also lived on poulet-frites and Pepsi-Max when I lived in France so touché). Not that I haven’t been vain about my stomach size in the past; once at the doctor’s office, the nurse asked me to stand on the scales to be weighed and I held in my tummy to make it appear as if I’d lost weight. That didn’t work. But I thought, no, if I’m a gourmand then so be it, I’m going to have that Mars Bar, to hell with you, drunken French stranger and your early-hours waist-size-judging fixation. Then I remembered, it’s ok, Mars Bars are slightly smaller in France than in England, so I have nothing to worry about.

Incidentally, I learned the French name for fire hydrants because I came across the French version of Gabi Campanario’s book “The Art of Urban Sketching” while in a bookshop in Strasbourg. Below, I talk in French about why I love sketching them so much (click to see plus grand, and I guarantee you, my French is nowhere near that good…)

Next up: sketching a totally French bar called “O’Sullivan’s”!