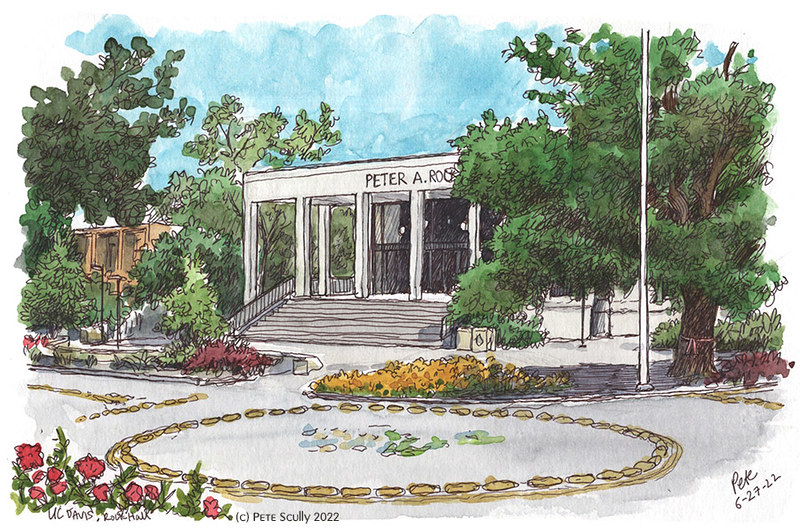 Still catching up with the summer sketching, here are some UC Davis sketches from in between the two Europe trips. I have actually done more drawing this year than last, although I am forever miles behind on scanning and posting. These first couple were done in June – June! A million years ago – and the first one is Peter A. Rock Hall, formerly Chem 194. As I write in the latter half of September, that roundabout is likely a wild mess of cyclists going round and round until they have the courage to veer off without causing a spaghetti bolognese of bike chains. 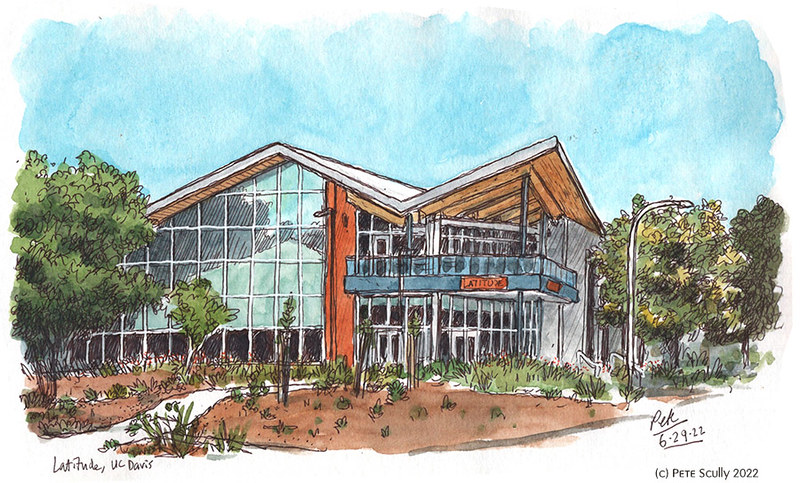 This is Latitude, a food place for students on campus. I like the roof, it looks like statistics, maybe of a pandemic, maybe an opinion poll, maybe the results in a Tottenham season (start well, go up, lose to Burnley or someone, start to dip, sack the manager, get a new manager, win against Man City or someone, start to rise, don’t win anything; as every Spurs fan knows, the real trophies are the managers we sacked along the way). 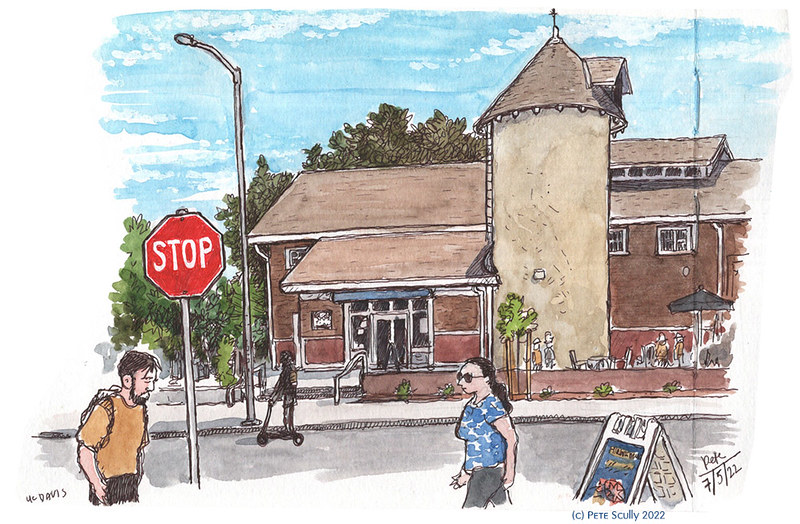 Above is The Silo, you’ve seen me draw this before. When I need to draw something with a pointy hat, we don’t have any wizards or wizard-school castles near here, so I draw the Silo. It used to be covered in greenery, but that has been shaved off to reveal a dull concrete torso. Someone sped past on one of those motorized stand-up scooter things. We never got actual hoverboards here in the future, did we. No, we got those electric scooters, that cut silently up the sidewalks and streets. I would fall on my Aristotle if I rode one of those about. I wasn’t even good on a skateboard. I had a skateboard for a bit when I was a teenager. It probably needed better wheels, better bearings, probably a better board, definitely a better person on top of the board. I just couldn’t make the thing go. I’d see other people, they seemed to just stand on their skateboard, tilt their head slightly and they’d be flying off, moving it telepathically. Never mind all the tricks, like the one where you jump off it and it spins around off a railing, and you land on it again like it was no big deal. If I ever did that, I would expect the win Sports Personality of the Year or something. I really wanted to be a skateboarder too; one day me and my friend Kevin, who also had a skateboard interest and a similar set of skills to me, met up in Harrow or Wealdstone or somewhere and skated a bit at some skate park, falling over, sending my board flying into a group of people before deciding, right, we’ve done that and are shit at it, so let’s go to the actual main skateboarding site in London, that area with all the graffiti on the South Bank in London, near Waterloo Bridge. We went that same day, got the tube down, and when we got there and saw all the kids doing tricks and flips, we basically stopped being skateboarders any more, and went back to just talking about football. Less Tony Hawk, more Tony Hawks (or is it the other way round). 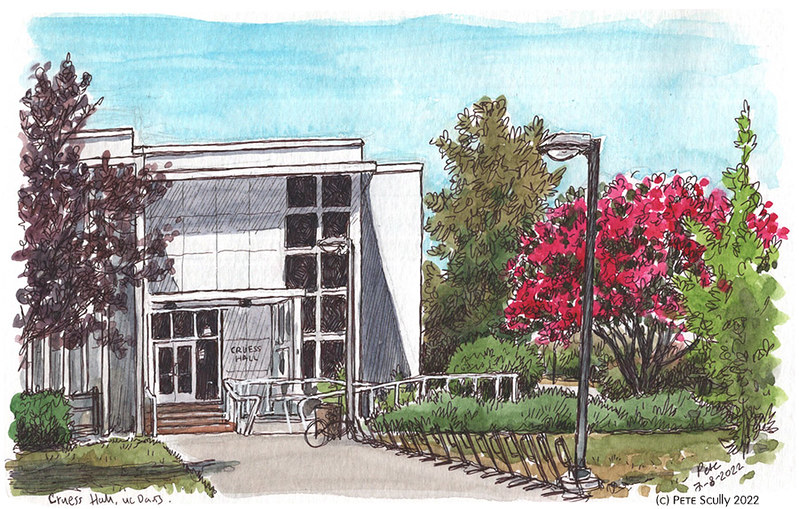 Finally, this is Cruess Hall, which had those bright pink blooms on the trees outside in early July. Cruess is where the Design Department live, and that’s where I had my 2016 show at the UC Davis Design Museum, ‘Conversations With The City’, a ten-year retrospective of my sketchbooks. That was six years ago this Fall. I have drawn quite a bit since then. If I just look at the past six years, on campus and outside, I’ve probably drawn more than in the previous ten years. I think I was quite happy with my drawings around the years 2014-2016 though, that was a good period of sketching for me. I’m still sketching, trying to get better, hopefully a better sketcher than I was a skateboarder.