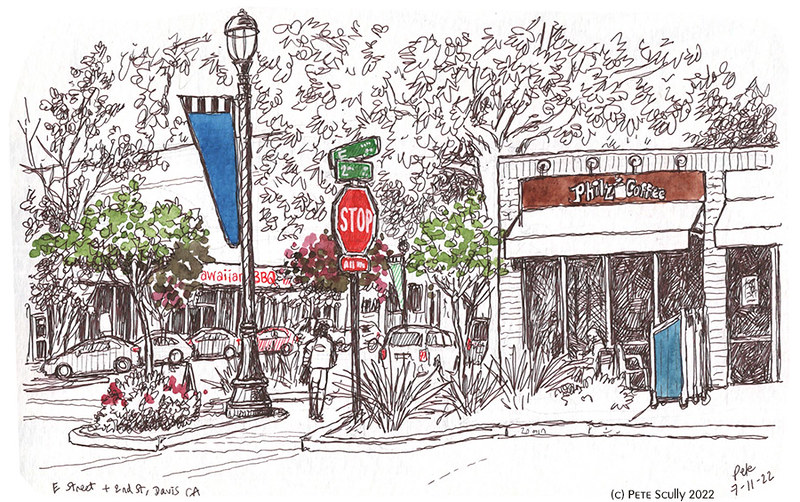 A couple of corners in downtown Davis from the first half of July. The top is on the corner of 2nd and E, the bottom on the corner of 5th and C. That Philz Coffee shop used to be DeLuna Jewelers; just around the corner (unseen) is the football shirt shop Soccer and Lifestyle, the first shop I ever set foot in here in Davis, back in (checks notes) 2005. I drew this after eating a ‘super burrito’ at El Patio opposite Philz. Yes, I’ve been here since 2005. Long-time readers will know that, but the further away 2005 becomes the more bizarre that sounds. 2005 was the pre-smart-phone era. The time of Blair and Bush! Spurs had Kappa shirts. Prince William had lovely hair. As I write, in September, it is nearly 17 years since that move, and I have watched (sketched) a lot of changes in Davis. Those triangular flags with the black and white stripes on top, they come in a number of colours but they have been pretty constant, that always tells me it’s Davis. Below is the side view of the Hattie Weber museum of Davis. I remember years ago when my son was about four going in there for their Easter egg hunt, and while quickly scanning and finding all the easter eggs hidden around the place he said “Daddy you drawed that!”, having spotted one of my drawings of that building on the wall, I think it was a print I’d sold at an ArtAbout event. We always liked that building, on our Saturday mornings out taking the bus downtown we would always stop off there to ring the big schoolbell outside. Crossing 5th Street there in July you could see the crosswalk painted for Pride, in bright rainbow colors. This was drawn on the way home from work during lunchtime, a quiet summer day. As I write, Fall quarter is beginning and the people are all back. 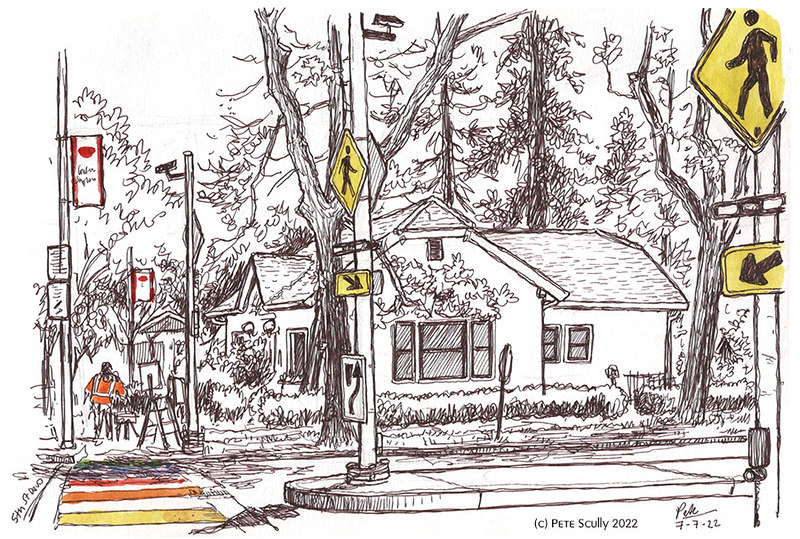