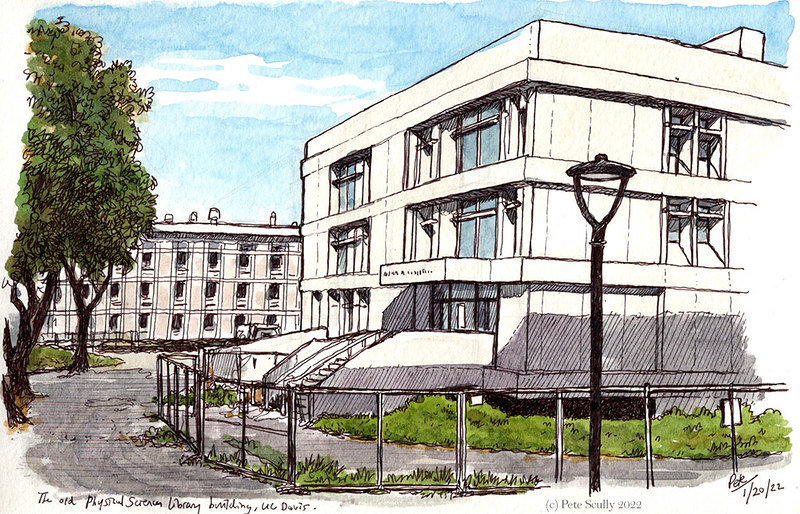 This was drawn while campus was still quiet, before people returned from the month-long remote period in January. That said, here on campus in early February, a lot of people are still working remotely, and there aren’t many coming into our department in-person just yet. This is the old Physical Sciences Library building, which has been undergoing a remodeling for the past few years. Beyond it is the Chemistry building, itself still undergoing a massive reshape. I drew this from the shade of the Physics building. When I was at school, science consisted of three parts – physics, chemistry, biology. You took all three, and then at GCSE level you did ‘integrated science’, which was divided among the three. As a rule, I enjoyed physics but was crap at it, I didn’t like biology but was good at it, and I was so-so about chemistry and was so-so at it. Maybe a bit more on the crap side. I was scared of Bunsen Burners (I mean who isn’t, really?). I like Van Der Graaf generators, mostly for the name (and the band). Biology though, I found it dull, and it was always a surprise to get some of the better grades in the class. My biology teachers were nice. I liked my physics teacher (Mr Vilis) a lot, even though he was always grumpy (he would go ballistic if anyone opened the window), and never gave me good grades or seemed to know I existed, but I still liked him, he could be funny. I really enjoyed reading about physics at home, but it was a difficult subject at school. Chemistry was sometimes interesting, especially when a test tube full of poisonous purple gas would break and everyone had to leave the room. Learning all the molecules and formulas was hard. I remember we learned ‘KMnO4’, Potassium Permanganate, and I thought that was the best possible band name ever, but I never used it. Now I think it sounds like a radio station in the US. Even if I had been better at school science classes, I would probably never have made it as a scientist because I would just make silly jokes from all the science words. And I am still afraid of Bunsen Burners.