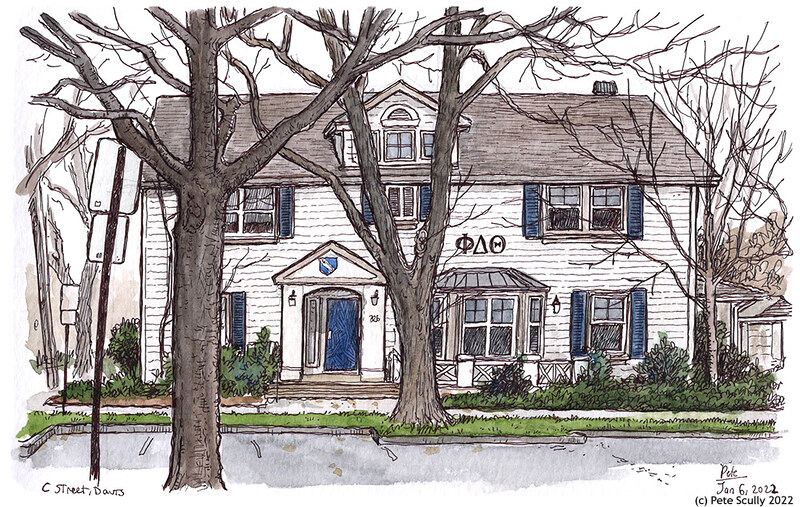 A big building across the street with a tree in the foreground? Oh go on then. C Street to be precise, right by 4th St, across from the park – I’ve drawn this spot before. I’ve said that before too, “I’ve drawn this spot before”, many times. I drew this on January 6th, on the one year anniversary of January 6th. The day the decorations come down. This is a frat house, Phi Delta Theta. A big old fancy house that isn’t that old; there was a similar looking building here before, but it was knocked down several years ago and then they built this one. I remember that I hadn’t sketched the previous one (surprisingly) and regretted it – people would tell me stories about their student days going to parties in the old one. Well, not many stories. I remember my own student party days. Well, I say ‘remember’, I mean I know they happened. They were a long time ago. Some fun times, going all over London because someone at uni was having a party, there were plenty of long journeys home on the night bus. Well, I lived in north west London out at the end of the Northern Line, but I went to university in east London, and people tended to spread out further eastwards from there. I vaguely remember one party at someone’s house in the Docklands, and afterwards getting totally lost on the Isle of Dogs trying to find my way back to the Mile End Road. No smart phones or Ubers back then, I just used the massive skyscraper of Canary Wharf as my compass – if I was moving away from it, it was probably the right direction. I just followed my nose. I obviously made it home ok. Another random party I remember, I was invited by a good friend to come to a house party in Leytonstone or somewhere, bloody miles away. I had been at my mate’s birthday in Burnt Oak (at his nan’s house) all evening, but I’d said I’d go to this party so it was pretty late by the time I got there, after an hour on the rube and a long walk through streets I did not know at all, not at night anyway (though I remember passing the cemetery where my Scully grandparents are buried; they died before I was born) – I was a bit nervous I might get put in the cemetery myself, some of the lads hanging around. I eventually made it to the party (how on earth did I find the place? Oh right I looked at the address on a map and just remembered the way, 90s style), and my friends there were all massively drunk already, it was definitely a party that was winding down. I think I stayed for about half an hour and had one drink before it was time to go, the long trek back across London. Another time, I went to a new years eve party in Gants Hill, which is like out in Scandinavia or somewhere, it’s that far away, and I didn’t even know the guy who invited me all that well, we’d just met in the student union a few times, as you do in the first year at college. I do remember that one of his friends gave me a lift down to the tube station at least, which was nice, because I’d definitely have gotten lost out there. I spent a lot of time travelling across the city at night in those days, usually on the way to or from somewhere. Formative years. Some things I don’t miss about being younger and being in the big city, but then again, I think I do miss it, sitting on a bus at night with the headphones on, not exactly sure what part of London I’m in. I don’t miss the wandering about at night being lost much, but I always find my way home in the end.