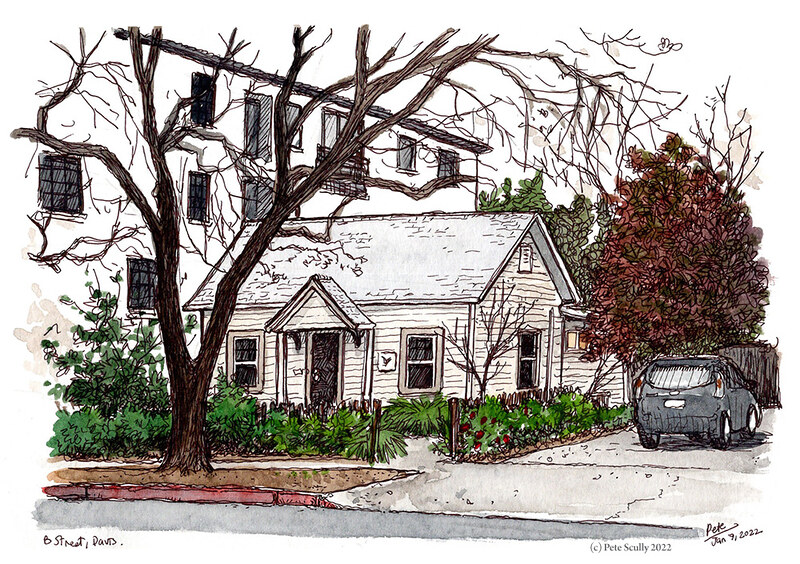 Another ‘building from across the street’ sketch, this time on B Street, a little house I’ve wanted to draw for ages. A bungalow, really, that’s what we always called one-story houses. There’s a big building next to it that they put up a few years ago that makes it look much smaller. I like all the old houses you see in this part of town between campus and downtown. I stood outside ‘Pizzas and Pints’ (I’ve still never eaten there) and drew this. Sometimes I draw bare trees and savour every branch, sometimes I just want the general shape and leave the other branches to the imagination. I like those dark trees that are just scribbles with some reddish purple paint over the top, like Mr. Messy. Mr. Messy was one of the Mr. Men. The Mr. Men were of course a huge influence over my early life. Roger Hargreaves was my art hero when I was four. I drew so many Mr. Men characters. At school, kids would ask me to draw characters for them to keep, I would sometimes spend all lunchtime drawing pictures of Mr. Rush or Mr. Strong for kids at school who probably saw themselves in those little geometry-based figures. I was probably Mr. Daydream. Or Mr. Lazy. Or Mr. Jelly. Yes, I was probably a mixture of all of those, with a splash of Mr. Silly, and a touch of Mr. Grumpy. I had a great idea, you know all those DNA ancestry services you get, well instead of submitting a blood sample and being told you are 14% Viking and 8.5% Visigoth, with my service you get told you are 19% Little Miss Bossy, 17% Mr. Chatterbox, 8% Little Miss Tidy, and 56% Mr. Topsy-Turvy. Make of that ancestry what you will. Instead of people going around proudly declaring that 4% of their ancestors were Scottish Robbers and wearing tartan trousers and domino masks at parties, they will start wearing a little green cowboy hat and eating eggs by the sackful. You’ll have to guess which Mr. Man I’m referring to there.