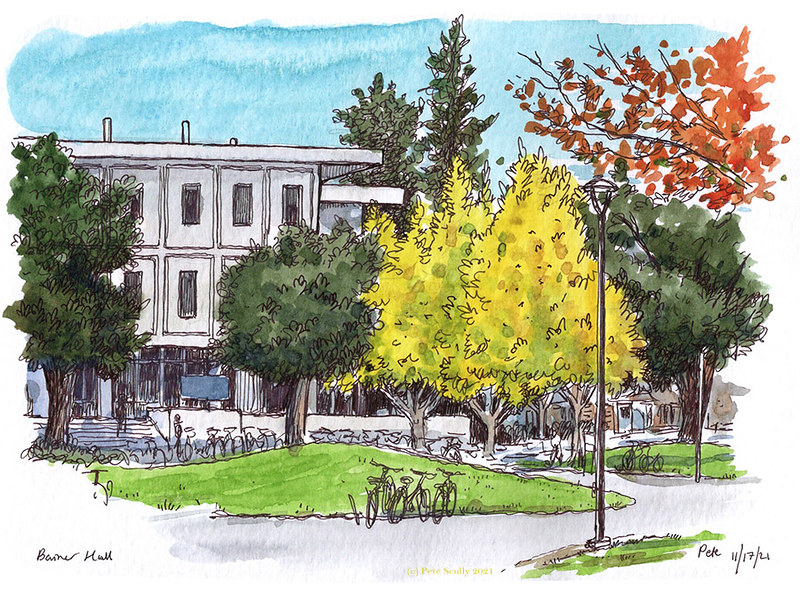 One last sketch from Fall that I forgot to post, this is a view of Bainer Hall, UC Davis, with those yellow-leaved trees in the foreground, another lunchtime sketch. You have to draw the world as it goes along. Those leaves are gone now. There are people in this sketch, three of them in fact, you just have to look for them. This is the place for Engineering on campus. I never thought of Engineering as a thing to do in my life, I didn’t realize the massive scope of what it could be, probably. To me, engineering was being stuck under a rusty old car with a wrench wearing overalls covered in oil, taking a break occasionally to read the Sun and swear about the football, and I figured, no I wouldn’t be any good at that, except the last bit of which I am really good at. I think Engineering may be a bit more than that, and it’s one of those areas where you have to be really really clever and know lots of very technical science, but also probably get your hands a bit dirty. Honestly I have no idea, like with most things. I draw little pictures of streets and things, slightly less complicated. I wonder if I’d have been a good engineer though? I wasn’t all that good in CDT class at school. CDT was ‘Craft Design Technology’, what Americans would call ‘Shop’. With all the big mechanical tools, gadgets, circuits, plastic moulding machines, and I remember being enthusiastic about it, except it was in a school setting where the politics of the classroom meant very little got actually learned. Lining up outside the class was the worst bit I think, there were always a couple of would-be bully lads trying to show off. It’s a shame, I remember I liked my CDT teacher, though for some reason I can’t remember his name, but really I wasn’t all that good at CDT, unless drawing was involved. I remember we learned about Ohms and Capacitors. Thinking back, I wish I’d been good at that class, I just wasn’t. Though I remember one occasion, a competition where we all had to design, make and then race cars out of a couple of bits of cardboard, some elastic bands, a couple of pencils and some plastic kinder egg shells. At least, that’s what I used. And my one actually won! I think my drawings of the design helped, but my actual little vehicle – like a paper airplane with elasticated wheels – won the race as well. One of very few things I actually won at school. I basically retired as an engineer after that, my career in the Formula 1 paddock was never going to burgeon.