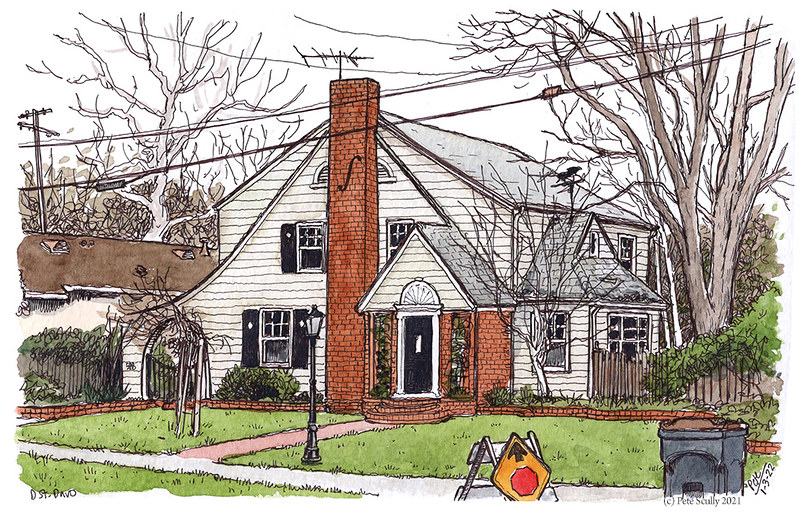 First drawing of 2022, a usual north Davis scene, a big old house I’ve admired for years while cycling past, one of many historic buildings. It’s on D Street; I wrote it down as D street, and then for some reason I thought it was on C Street and kept saying as such, joking that I’m out of key by one note, maybe I had a capo on my sketchbook, etc. I thought that was a pretty good joke as well, but it turns out it really is on D Street, so I will have to draw something else and get the street wrong so I can use that gag again. I did write 2021 in the corner and changed it to 2022, but then put 2021 into the wordmark. Start of a new year, I’m all over the gaff.

It’s nice to fall into a trusty subject for me though, drawing houses. One of my favourite local books is John Lofland’s “Old North Davis: Guide to Walking a Traditional Neighborhood”, which details each house street by street in the Old North Davis neighbourhood, generally between 5th and 8th, B and F.  I looked up the building in that book – it’s called the “Warner Home” after its original inhabitants, William and Fern Warner, and was built in 1929 as a gift for their wedding; that’s a very nice wedding gift, nicer than a toaster. The style of the house is ‘Colonial Revival’. I particularly like the differently angled slants of the roof, like two houses have somehow merged into the same spot. I love the lamp-post, and the arched gateway into the yard. That chimneystack is so prominent at the front like it holds it all together like an orchestra’s conductor, with the antenna on the roof (something you don’t see as often these days) looking like the baton. This is a very musical looking building – the metal ‘S’ shape on the chimneystack looks like the shape you’d see on a cello. I can hear my voice sounding like the guy from Through The Keyhole, Lloyd Grossman: “the arched gateway, the lamp-post, the cello symbol on the chimneystack – who lives in a house like this? David, it’s over to you.” I used to love that show, always makes me think of the guests they used to have, people like Willie Rushton,  Kenneth Williams, Clare Rayner, the usual late 80s/early 90s crowd.

I met Clare Rayner once, she was giving out the prizes at our school’s annual Prizegiving ceremony. I won the German Prize , and she presented me with the book I requested as a prize, which was ‘Teach Yourself Italian’. I won the German Prize twice at school (or it may have been three times; I think it was because I was the only person in the school who got excited about the subject), I recall one year I got the Terry Pratchett book ‘Lords and Ladies’ as my prize, still one of my favourite of his books. I still have that copy, with the little thing stuck in the front saying I won the German Prize. It sounds like it should be a prize for something more distinguished rather than something my school gave me when I was 15, maybe I should start describing myself as a ‘multiple German-Prize winning artist’, in a kind of ‘Arnold Rimmer’ way. I don’t win many prizes. I don’t enter any competitions.

One thought on “on song in the new year”