2020 : The Sequel. The Empire Strikes Back of years. Actually, it’s the Godfather Part II of years. And now we ae in 2022, which will hopefully be more Return of the Jedi than Godfather Part III. Hmmm, all of these make it sound like 2020 was somehow the Star Wars or Godfather of years, and it totally wasn’t. It was the Batman v Superman: Dawn of Justice of years. Which means that 2021 was the Justice League of years. Maybe 2022 will be the Rocky III of years?

2021 was a long bloody year, some big ups and big downs. We lost some family and friends, but also my new niece was born. We travelled more than 2020, but all in the US – Hawaii (twice), Utah, Yosemite, San Diego, Laguna Beach, among others. Really got into those National Parks. There was a lot of soccer, both watching and coaching, too much maybe, it feels like there hasn’t been a break, with the big drama of England at the Euros, and Spurs having four different coaches. I’ve been more excited by Formula 1, having seen one of the best seasons I’ve ever seen, although the bloody ridiculous ending still gobsmacks me. The world of news, well we started with that awful event at the Capitol, but now that other fella is out of office it’s been really nice not waking up every day to “what the bloody hell has he said now?” But the big Covid keeps moving about and mutating into new Greek letters faster even than Apple brings out iPhones. But 2021 did give us Get Back, the amazing Peter Jackson epic of the Beatles, which I think has changed my life. And I have done a lot of drawing. There they all are above. More sketching than I did in 2020, thankfully, but still way short of 2019 (the year of the big summer sketching trip to Amsterdam, Belgium, France, and three times to London). Funny enough though, I did pretty much the same amount of sketching in 2021 as I did in 2018, when I went to the Urban Sketching Symposium in Porto. Here is the annual side-by-side comparisons of sketching output going back to 2013. 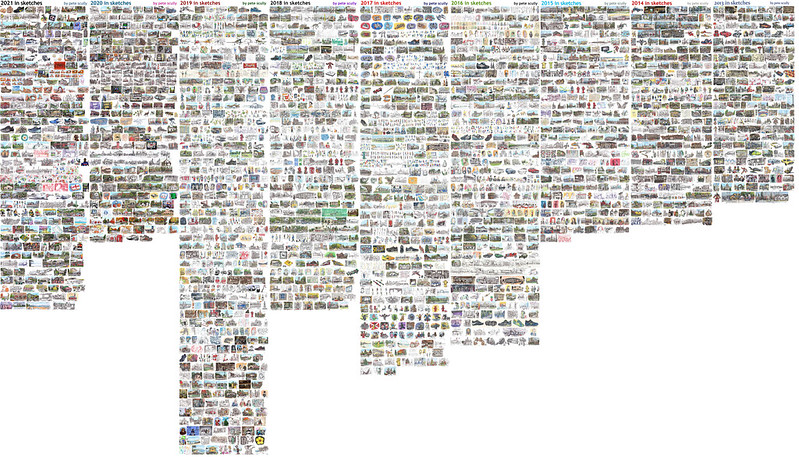 Here’s to 2022, which so far I’ve done my best not to feel like has actually started yet, and a year that already it seems you cannot really plan for. Keep on sketching.