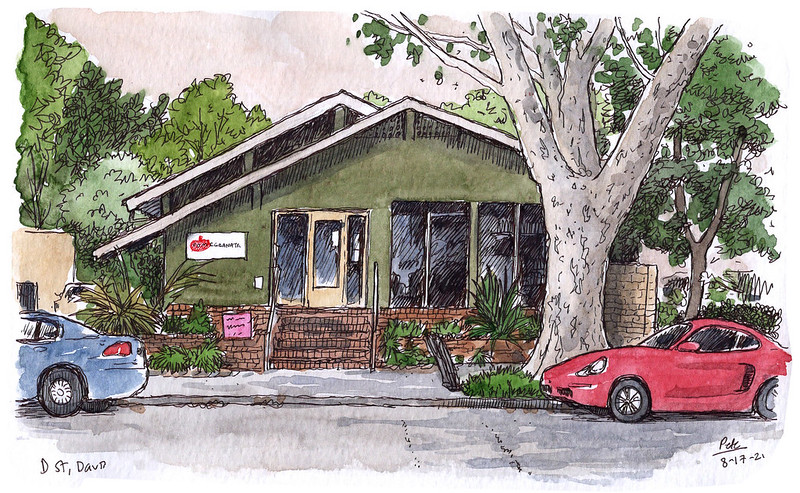 The sky was bad in this one. We’ve had smoke events again this year, not anything quite like last year thankfully, but enough to cancel one of our soccer games and also a tournament up in the Tahoe area. They have had terrible fires up there. Thankfully the air here in Davis right now is pretty good, let’s hope it stays that way. This is on D Street, I think this place is called Pomegranate. By the look of it they look like stylists, or something, I don’t know. Have I drawn this building before in a previous iteration? Probably. I’m starting to forget what I’ve drawn, hard to believe though that is. I go to my Flickr album “Davis CA” and see there are 1,281 items there, and it seems like, wow that’s a lot but I thought there’d be more. That includes UC Davis; in that separate folder there are 599 items. Again, thought there’d be more, given how much time I’ve spent drawing there over the past decade and a half. What am I saying, I’m not drawing enough? I probably am not. But I am busy, and I don’t always have time to get a drawing that I want. Davis isn’t actually that big. I say to myself, if I lived in a bigger city, in London or San Francisco or New York, I’d draw even more. Truth is, I probably wouldn’t. I’d spend so much time on the bus, or the subway or tube, and I’d get bored drawing all the taller buildings. Then again, when I want to go to a different area with a completely different look or feel, it is easier in a big city. But you make the big small, don’t you; in London I loved how massive it was but it also felt like I could fit it in the palm of my hand. Mentally you fit it all into a small box, and you sometimes don’t go too far outside of the village if you know what I mean. There are parts of London I have never been to. I’ve never been to Richmond; watching Ted Lasso reminded me of that. (Kind of bit bored with that show to be honest. We don’t swear like that in London! We swear a lot, but in a different way than that, more in a ‘filler’ kind of way; you have to hear it to know. Not just blaring it out at anyone. Also we say “wanker” but it sounds more like “wangkah”) (That reminds me, when I was pretty new to Davis a woman at the checkout in the grocery store asked if I was from England, I said yes London, and then she asked me to say “bloody”. “You what?” I replied. “Ohmygod I love it when British people say “bloody” can you say “bloody”?” I was like , eh? “Nah bollocks, buggeroff I ain’t f*ckin’ sayin’ bloody, flippin’ avin’ a larf? Bleedin’ cheek, f*ckin’.” I think that made her day.) (I do say “bloody” a lot though.) Anyway enough of the swearing. So yes, just like you make the big small, at the same time you make the small bit. You look more closely at the small place at all the details, tracking all the changes over the years, and that’s why the sketchbook (and the sketchblog, come to that) is a great tool for recording that. But did I draw this before? I had a look, it looks like I drew it in the background of the building next door (see here) but that’s not really the same thing. No, I haven’t drawn it before, I’d remember. I always remember, I think.