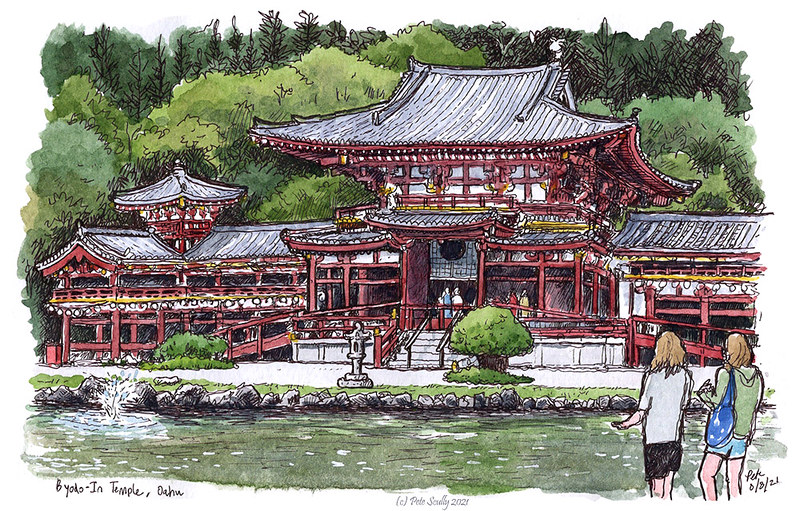 A couple more from our trip to Oahu. On this one morning we drove across the island to the Byodo-In Temple, in the Valley of the Temples Memorial Park. It is a buddhist temple that is a replica of the centuries-old one in Kyoto, Japan. It was a peaceful place, despite the tourists, with the only sound being the heavy ‘bonnnggg’ of the big Peace Bell that people can ring. We walked about a little, and then I got to do a sketch of the building and all its details. I coloured it in later. We had to go to the beach again. This was another of the locations we recognized from the show Lost, when it stood in for a place in South Korea where Sun and Jin were married. It’s very pretty there.

The next day we drove up the Windward side of the island again, stopping at the botanical gardens first (didn’t sketch there, just walked about a bit) before more beach time (didn’t sketch there, just splashed about a bit) before driving up to the Polynesian Cultural Center, to eat some lunch at the Hokilau Market Place. There were some great food and drinks there. I fancied some garlic shrimp, so I got some of that from the food truck on the left, and opted for the spicy version, which was very very spicy. Like, I was in a bit of pain for a couple of days, maybe it was too spicy. I washed it down with some interesting and refreshing soda from ‘Soda Bomb’, on the right of the panorama above. One of the girls who served me noticed my UC Davis facemask, and told me her grandpa lived in Davis. We sat there for a while and I drew what I could, outlines and some details, but we wanted to get some more important beach time in so I did the rest later. I love that big mural on the side, “Hawaii is my Happy Place”. Totally is. Anyway we decided that rather than spend some time on the beach we would sit in the car in miles of traffic instead, that was fun. We had wanted to get off at Waimea and hang out at the beach there, but so did a lot of other people, and they just wanted it more, I guess. We had been to the Waimea Valley last time we were here, swam beneath the waterfall, but this time we just looked at the ocean from the car. Eventually though we did stop at one beach that we heard was popular with sea turtles, and parked along the busy road to go and see for ourselves. Wow, there were so many, and not just lying about, they were swimming over the waves, every big wave that crashed in you could see their huge silhouettes, and the giants would come into shore and lay on the flat wet rocks. Sea turtles here are called ‘honu’, and we have seen them before, but not quite like this, it was some amazing honu action. There were people at the beach helping protect them by giving out information about them, and stopping curious travellers from getting too close to them or bothering them, which I was glad to see. When we waved ‘aloha’ to the honu, we got back in the car and drove back to Waikiki. We only spent a short while in Oahu and loved it, and can’t wait to go back some day.

3 thoughts on “temples and food trucks”