Last Sunday morning, on the first day of August, we held our first Let’s Draw Davis sketchcrawl of the year. It has been a while; I paused organizing them due to the pandemic and I’ve been busy on weekends this year, but one of my fellow Davis sketchers Marlene Lee suggested holding one at Central Park that day during the craft Fair that was going on. It was a good idea. There were lots of vendors selling interesting art items, and there was a band called ‘New Harmony Jazz Band’ playing old numbers. It was nice to see other sketchers again, I’ve been hiding away for a long time and seeing others out and about doing their stuff is always good to see. Plus one guy (Alex) was wearing a Wolverhampton Wanderers shirt! I was delighted, I love football shirts but I’d never seen someone in Davis wear a Wolves shirt before. I’m showing you the sketches I did in reverse, so I can put my final drawing – this big panorama of the Craft Fair in the Farmer’s Market area – first. There were quite a few people around but it wasn’t crowded. Many people were masked up but most weren’t. Many of the sketchers were (including me for about half the time, usually when I might be interacting with people). It makes me feel more like a ninja, plus the mask I was wearing has my drawings on it (you can get masks with my drawings on here! https://society6.com/petescully/masks). I drew the scene above in about 1.5 hours, including about two thirds of the colour, but I coloured in the background when I got home. It was already getting hot, and I stopped for a shaved ice (which needed a few more flavours). Below is the band, they played nice music to sketch to. I drew that, and my other people sketches, with the Zebra brush pen that I was using a couple of years ago. It’s nice to use something like that again, it makes for rapid sketching. 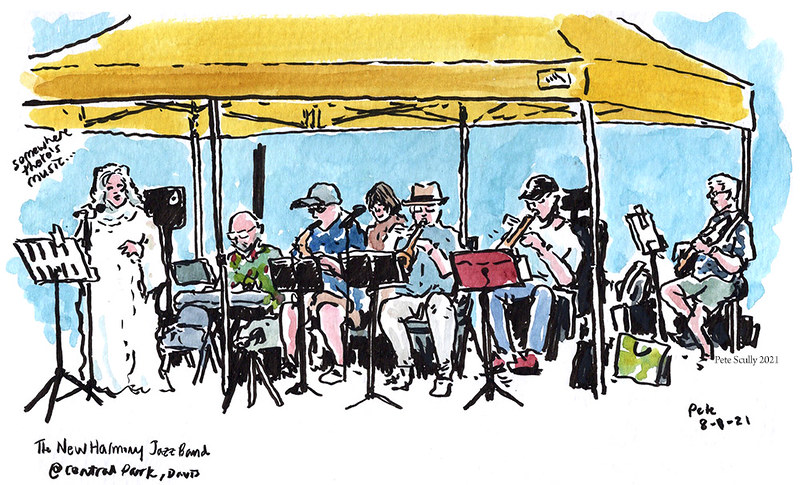 And below are most of the sketchers, as you see I drew Alex in his Wolves shirt twice. If I had drawn more detailed sketches I would have done all of the shirt detailing on the front of that particular shirt. I myself was wearing my France football shirt that day, a favourite of mine, but mostly in honor of Esteban Ocon, who had won his first Grand Prix that morning at the Hungaroring in Budapest, a crazy race that saw a lot of carnage at the first corner. Ocon was also the first French driver to win a Grand Prix in a French car (Alpine, formerly Renault) since Alain Prost in the Renault in 1983. To see the podium with just one anthem played and for it to be the Marseillaise, well I’d never seen that before so I wore my French shirt in Ocon’s honor. I am about as obsessed with Formula 1 as I am with football shirts, as you can tell! I get up very early to watch it.

Below are Ann Privateer and William Lum, also drawn in the Zebra pen…

…and here are Ann Filmer and Marlene Lee, sketching in the shade. We’re hoping to have the Davis sketchcrawls go monthly again; I just got my soccer coaching schedule (so many Saturdays to the end of the year, and beyond) so others will organize but since campus is all coming back in-person this Fall it will be good for people to get outside and draw with each other again.

The Let’s Draw Davis FB Page (where events will be posted) is here: https://www.facebook.com/LetsDrawDavis

There’s also a Let’s Draw Davis FB group, where people who attended can post their sketches and photos afterwards: https://www.facebook.com/groups/LetsDrawDavis/