After waiting on Market Street for a long time for a bus that was never going to come – it seems some services were reduced or cut during the pandemic, but the bus stop obviously didn’t like to say – I jumped on an N-Judah Muni metro up to Duboce, on the way to my next destination that day, Alamo Square. I realized that I had not been to Alamo Square in about a decade, when my mum had visited from England and we went to see the ‘Painted Ladies’, that row of Victorian houses sloping down the eastern side of the park, with the backdrop of San Francisco behind them. I had not actually been there to draw in even longer – July 2008, if you can believe it. The drawing I did that day is below. I remember that I came down for an overnight sketching trip while my wife had gone up to Oregon, and covered a lot of ground, wandering and taking the bus and really connecting the city together in ways I’d not done before. 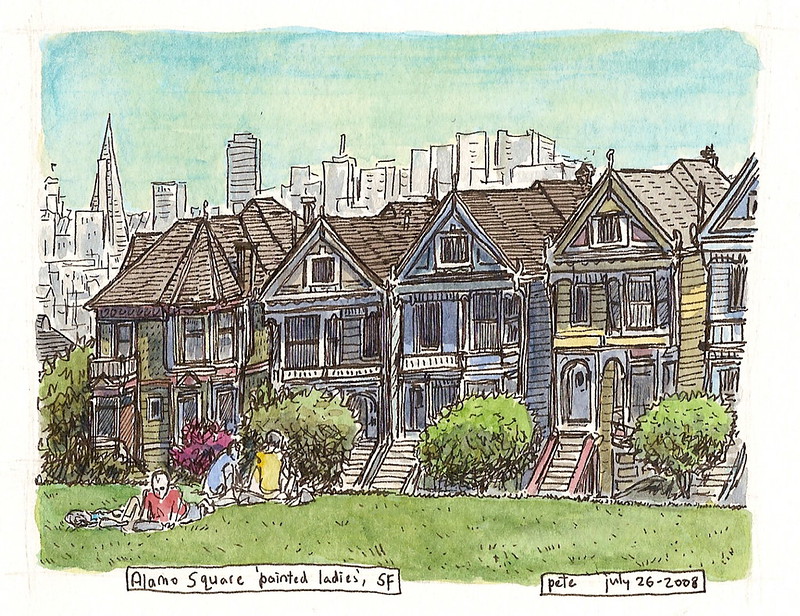 The big Victorian houses around here are impressive, many that pre-date the 1906 earthquake and firestorm, as they were saved from the flames. Alamo Square park sits on high ground overlooking the city from a distance, and that backdrop has changed a lot since 2008. The massive Salesforce tower for one, that wasn’t even a twinkle in the architect’s eye. The Painted Ladies – unpainted in this case, and you can click on the above image for a more close-up view – might be the most photographed, painted, drawn view in the city, maybe even more than the Golden Gate Bridge itself. It’s a romantic view alright; while I was sketching a wedding took place nearby, and there were lots of couples out enjoying the view. It was a sunny day, but breezy, easy to sunburn, lovely to look at. Most of the groups of people in the park were young, enjoying the day, making memories I guess. I drew and drew and drew, two hours I sat there on the grass, really working those eye muscles to try and see all the details in the distance. By the time I was done my body said “no painting, leave it, time to move along”. If I had been staying overnight, I might have sat there longer and added in the colours, but I think this way you can imagine them yourself. The Painted Ladies aren’t painted very brightly – they are different colours, but are quite muted. I should have drawn them arranged like a Zoom screen, very 2020-2021. Alamo Square park was busy, but not as crowded as Dolores Park was when I sketched a panorama there in June. There was a lot of space around me still. It’s quite an uphill walk to reach here though, I walked from Duboce Park, where I last sketched a few years ago, up Pierce and past the corner with Haight that I also sketched a few years ago, stopping off for a cold soda and of all things an Aero bar (this one corner shop had a lot of British chocolate for some reason), before climbing the steep hill to get here. 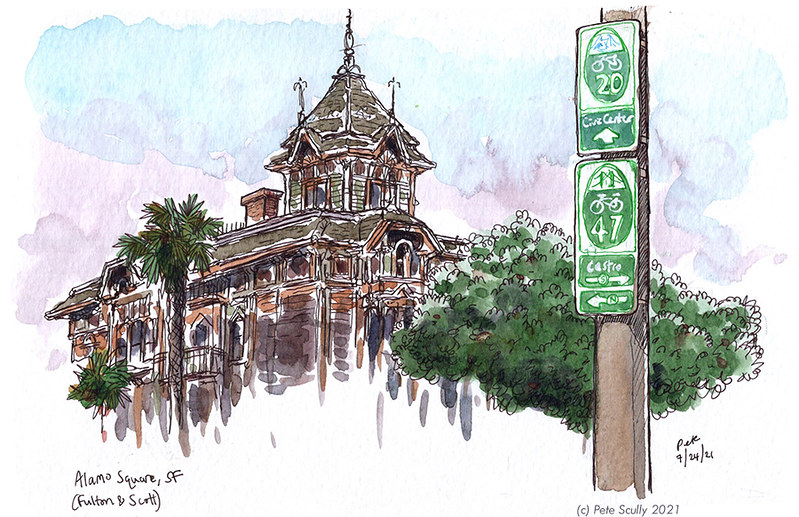 On the other side of the square, over the hill where they let the dogs run free, I stopped to draw this big imposing mansion on the corner of Fulton and Scott. It had a very ghost story, whodunnit, creepy mystery hotel look about it, and if I’d had the time I would love to have drawn the whole things in more details. The day was moving along though, so I kept it quick. I had more wandering to do before zipping back across town to get the Amtrak bus. Besides as I drew, I noticed that, hey man, I’m kinda stinky. I didn’t think I’d been particularly sweaty, after all I hadn’t walked as much as usual by this point, and surely I would have noticed when I was sat drawing in the park. It could only be me though, there were no other people around. It was a strong stench too, to the point where I moved right away when people passed me in the street, it was embarrassing. I imagined the train home, people getting on and sitting down nearby then moving further away. I would really need a long shower when I got in. I stood next to some purple flowers to draw this thinking maybe they will mask the B.O. smell. When I was done with the sketch I walked back through the park, and noticed that the smell was gone, and I wasn’t stinky any more. That was weird, it definitely smelled like sweaty sketcher smell. Oh well, maybe it’s not as bad as all that. Then I passed by a flowerbed containing more of those purple flowers and whoosh, that smell was back. It wasn’t me, it was the flowers! Flowers genetically evolved to smell like sweaty human. They were pretty gross. I walked away and yep, smell was gone. Relieved that I wasn’t a stinky sod, I walked about the Fillmore neighbourhood, where I hadn’t walked since my 2008 walkabout. You can see where the zone of big Victorian houses abruptly ends in the Western Addition. I passed through the Fillmore (a street worth another sketching day to itself, with its history of Jazz music and of the African-American community) on my way to Japantown. I didn’t get a lot of time to spend here but I went into one second-hand bookshop, and nosed around the little plaza of Japanese stores and restaurants before sketching the big Peace Pagoda building at the Japantown Peace Plaza. The San Francisco Japanese community was torn apart during World War II with the awful legacy of internment camps, a part of US history not talked about often enough. There’s a graphic novel by George Takei “They Called Us Enemy” that I am going to read, about his experiences during that time. It wasn’t busy around here that late afternoon, but still there was a good atmosphere, summer in the city.  I walked off to catch a bus after sketching this, and head back home. 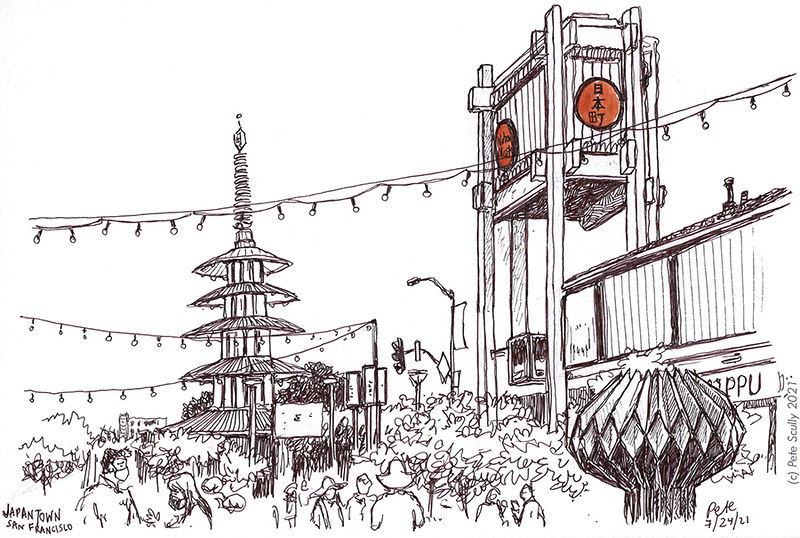 To catch a bus – yeah, I’d not really been on a bus in a city since the pandemic began, not even in Davis. Let alone San Francisco, where the buses are typically full of people quite close together. Sure, we’re all masked up but I was a bit anxious still about being in close proximity to people, and it was a long ride. I had decided not to walk down to the N-Judah metro, the bus was closer and would take me all the way to the Amtrak bus. Well as people got on and off and shuffled past I decided to bail out at the Tenderloin, getting a bit more space on the streets. I headed off to the big mall on Market to grab some food, getting slightly sidetracked by the discovery of the Lego store (I can’t help myself), before finally heading home. It was a long day in the city, tiring, productive and I’d done a bit of exploring, a it of learning, and now I have a bit of reading to do too. All worth the $62 round trip fare I guess. It was still about forty degrees cooler than it was in Davis, and that’s always worth it.