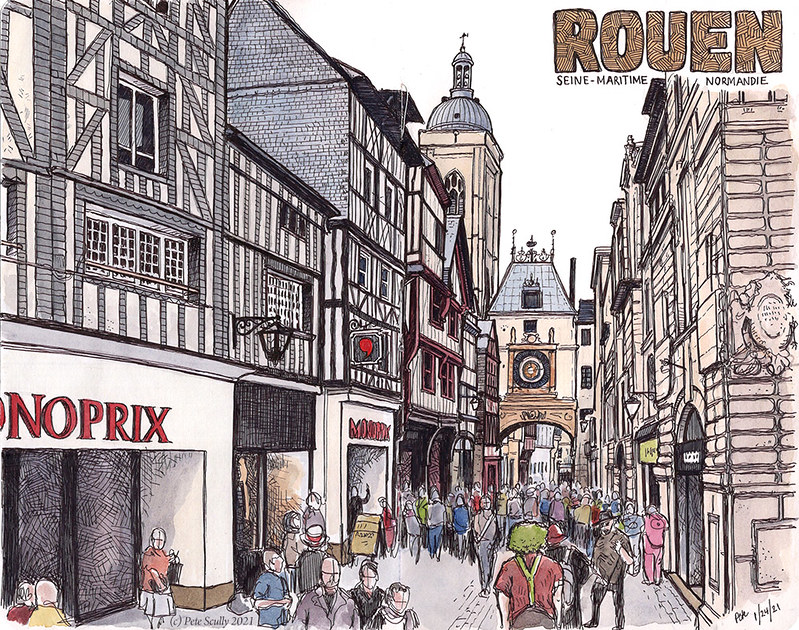 The real Tour De France finished a couple of days ago in Paris – Tadej Pogačar from Slovenia won his second Tour De France title, on penalties after extra time, I don’t understand the rules. Well done though, that’s great; he won it last time around too in 2020. Looking at the list of recent winners I recognize a lot of the names, several Brits, and of course Wiggo in 2012. There was someone called ‘No Winner’ who won a lot of them between 1999 and 2005, wonder what happened there, someone with strong arms and stronger legs. But I digress, as you cannot do on a Tour De France. We rejoin the Virtual Tour on stage five, in the region of Normandy and its historic capital of ROUEN.

I loved drawing this, as you can tell. Give me a street of half-timbered buildings and I am happy as an appropriate metaphor. Rouen has no shortage of such streets to draw. There are a lot of people too; people add some life to a scene, and create a tangible perspective for us to understand the geometry of the space. Also, a clown with green hair, because every drawing needs a clown with green hair. I have never been to Rouen; I did study the medieval Normans when I was doing my MA in medieval English, my final dissertation focused on the relationship between English and French, in particular Anglo-Norman, the variety of French used in medieval England for a few centuries following the conquest. Specifically I explored the apparent antagonism between the two languages as England moved from French-speaking governance to English-speaking governance, while the English language evolved as it blended with the Anglo-Norman style of French, which itself was becoming seen as a bit of a less-prestigious version compared to that of Paris, even mocked by Chaucer. Rouen, on the river Seine, was the Norman capital – it still is – but was founded by the Gauls, and called ‘Rotomagus’ in Roman times. Famed Rose-Wars-King Edward IV of England was born here. So was famed toilet-sideways-turner Marcel Duchamp, and famed Euro-2000-final-golden-goal-scorer David Trezeguet. And Formula 1 driver Pierre Gasly, which is appropriate because the very first competitive motor-race in the world went from Paris to Rouen in 1894, the “Concours du ‘Petit Journal’ Les Voitures sans Chevaux”. That first race was won by Albert Lemaitre in a Peugeot, although he actually crossed the line second, because the driver who originally came first, Jules-Albert, Comte de Dion, was disqualified due to his engine being ineligible, not the last time someone would win a race in France but later have it stripped for breaking the rules. The Road to Rouen, also a Supergrass album.

You’ll notice Monoprix on the left. Monoprix is a chain of department stores in France that we used to go to all the time in Aix. They had food on the basement floor, clothes on the first floor, upstairs they had TVs and fridges and kids toys, and I would go there for notebooks and pens and stuff. The food was a little more expensive than at Super U but not much, but not as cheap as the cheapy store “Ed”. I remember it would take a long time to find the fresh milk. It felt like doing a fantasy role play quest, trying to find the fresh milk in Monoprix, or any other French supermarket. They like the old UHT over there, but to me that tastes like shite. They make up for it though with their other dairy products, and I really love the French cheese. I remember back in first year French class when Mr Smith brought in a variety of disgusting smelling French cheeses for us to try, and despite being floored by the smell I did like the taste. I remember trying Pont L’Eveque, a cheese from Normandy, and it not being like anything else I’d had before. I do love to go into a cheese shop in France and get the whiff of Camembert whack me in the nose as I walk through the door. Someone asked me once what my favourite French cheese was, I told them I don’t have a favourite French cheese, but if I had to choose I’d probably say my favourite French cheese was ‘Fromage’. Actually in all seriousness I really like Laughing Cow, “the thinking man’s Dairylee triangle”. In French they call it ‘Le Vache Qui Rit’, ‘The Cow Who Laughs’. It sounds like a piece of nouvelle vague cinema. “Le triangle de dairylee de l’homme qui pense.”

And on that note, we sail down the river Seine away from Rouen to the coastal town of Honfleur. Toute à l’heure!