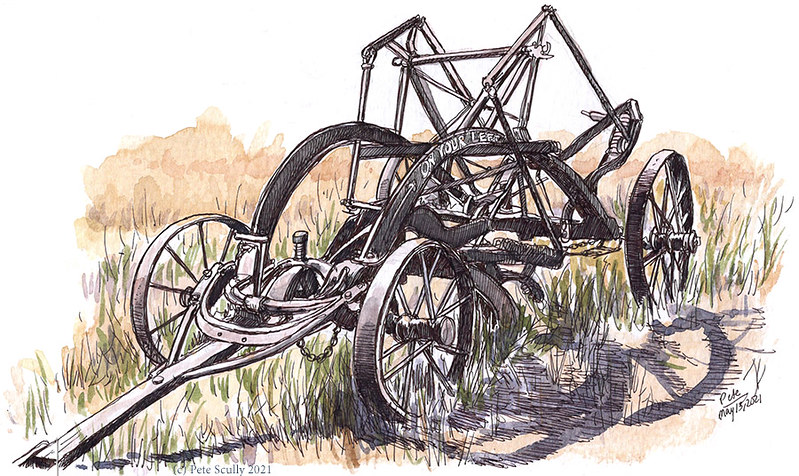 UC Davis is a huge campus. You look at the map and you see all the buildings clustered around the bit that hangs off the edge of downtown Davis and you think, yeah that’s a decently sized campus that, yeah you need a bike to get about, but it’s not massive. And then it’s pointed out that what you see on the map is like looking at a camel and only seeing the humps. Or going to a Barcelona game and only watching Messi. Or eating a 99 ice cream but not eating the wafer cone. Actually it’s not really like that, I just really want a 99 ice cream cone. A 99 is a soft-serve vanilla ice cream in a cone but with a chocolate flake in it, popular in Britain. It’s very hot in Davis this week and one of those would be nice. But it’s not like a map of UC Davis, unless the cone part is really far away from the flake part. The point is, UC Davis is much bigger than you think. We are an agricultural school, and to do that you need lots of fields, and space. Cycling around campus this week I have compared it to a game of Carcassonne, do you know that game? I’m a little obsessed with it. Several roads on the main part of campus are currently blocked off due to ongoing construction work, which makes cycling around quite a journey of discovery, but I do always think, “my opponent put that there to stop me from completing my city! Where will my meeples go?” So, campus is actually huge. In fact it’s so huge, we have our own airport. We are the only UC with its own airport. Useful for the crop-dusters, you see, and there are plenty of those. Side-note, until I moved here I did not know what a crop duster was. I’m from London, not really a thing, not really a big farming city. So when Han Solo says that travelling through hyperspace is “not like dusting crops, boy” I honestly had no idea what he was on about. I had images in my head of someone going through fields of maize with a little cloth wiping down everything. Similarly when I was a little kid I used to think skyscrapers were called that because they had people on the upper levels poking brooms and rakes out of the window to, I don’t know, get rid of clouds? I still have actual drawings from when I was six showing this obviously wrong and stupid misconception. With crop dusters I was 29 when I moved to America so it’s entirely conceivable that if I’d stayed in London, I’d still assume farmers would go out into the fields with little feather dusters and cans of Pledge. Also, what crops did Han Solo think Luke was dusting anyway? He was a moisture farmer in a desert. It’s literally all dust. Han is from Correllia, not really a big farming planet.

Anyway, during this pandemic our offices have been closed and we’ve been working from home, but mail still has to come in and be picked up, and our campus Mail Division is located right on the outer rim of the university. If there’s a bright centre to the campus, it’s on the road that it’s farthest from. I needed to collect some checks for an urgent visa application for a new scholar so I cycled all the way over to the Mail Division building, while big tractors rumbled past me on the road, and loaded up my bike with several weeks’ worth of mail and packages, all strapped with elastic onto the rear basket. Opposite Mail division, near the entrance to the UC Davis Airport on Hopkins, there are a bunch of old farming machines, iron skeletons of ploughs, old small tractors, all plonked by the road among the long yellow grass. I’ve always wanted to draw them, so while I was on this long round-trip I thought, well why not now. I didn’t draw the whole thing there as I was busy and had things to do, and I could waste time with my pens when my chores were done. So I finished it off at home later. This is some sort of farming instrument, but I don’t know what it’s called because as I say, I’m from London and the only farms I ever knew were Chalk and Broadwater. I like the the words “On Your Left” were written on the side, it reminded me of Steve Rogers and Sam Wilson. Like I said I finished this off at home, and while I drew I watched “The Crystal Calls”, which is about the making of the Dark Crystal: Age of Resistance show, one of my favourite things ever. This seemed appropriate, as much of the program was about how the puppets and props were put together and used, and this looked like the framework of the Skeksis carriage. I want to go and draw the other old metal farm things, but it’s a very long way to ride out to. Maybe next time I get the mail.